With a juicy insect dinner perched on a leaf above the water, what is a hungry little archer fish down below to do? Knock it down with a super-powered, super-precise jet of water that packs six times the power the fish could generate with its own muscles, according to new findings published online October 24 in PLoS ONE.

The stunning spitting power of the amazing archer fish (Toxotes jaculatrix) was first described in the 18th century. The creature lives in mostly in mangrove forests and estuaries where insects are prevalent—above water, that is. And these tasty treats are not easily knocked off of the plants that hang over the archer fish’s territory. The insects, such as grasshoppers, can hang on with a force some 10 times their own body weight.

So the archer fish has developed an impressive strategy for fetching food that not many other fish can reach. Its water jet can target and dislodge a single insect so that it falls into the water for the fish to eat.

Just how the fish manages to do this—and in less than a second—had remained a mystery. Many scientists figured that the source must be a special organ in the fish’s body. “The origin of the effectiveness of the jet squirted by the archer fish has been searched for inside of the fish for nearly 250 years,” Alberto Vailati, a physicist at the University of Milan and co-author of the new paper, said in a prepared statement.

Vailati and his colleagues set up an aquarium to film the 6.1- to 6.7-centimeter-long archer fish spouting water at experimental targets up to 15.3 centimeters above the water line. Each time the fish hit the target they were rewarded with a cricket or piece of fish food dropped into the tank. Using high-speed camera that captured 1,000 frames per second, the researchers were able to analyze each stage of the jet’s formation and—surprising—acceleration. 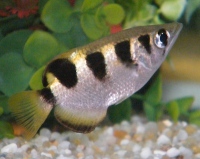 The researchers found that the first section of the water to leave the fish’s mouth was traveling about two meters per second. But as the fish continued to expel water into the jet, the speed increased. This back-end power forced more water and momentum into the “head” of the jet. “As a result, the power that the head of the jet can deliver upon impact increases during shooting,” the authors explained in their paper.

Surface tension holds the head of the jet together in the air. This allows the head to balloon out as it becomes larger and more powerful, finally creating a large liquid power punch that can whack an unsuspecting insect off its seemingly safe perch in a matter of milliseconds.

Similar dynamics are already used for inkjet drop-on-demand printing, the researchers pointed out. As scientists are still working out some of the details of liquid jet dynamics, researchers and tech developers might benefit from taking some lessons from the archer fish.

Other animals have also developed surprisingly fast mechanisms, such as the chameleon’s tongue, which is sped up by special collagen rather than muscle fibers and can reach accelerations of 500 meters per second squared. But the archer fish does not rely on special internal structures for its power. Instead, it uses these external forces to deliver much more power (some 3,000 Watts per kilogram) than it could have generated using muscles within its body (a paltry 500 Watts per kilogram). “Power gets progressively transferred from the muscles to the tail of the jet, and in turn, to the head of the jet,” the researchers explained in their paper.

The fish’s genus Toxotes comes from the Greek word for archer. “In retrospect, this name could be far sighted and well deserved,” the researchers noted in their paper. “Archer fish employ an external mechanism for the amplification for muscular power, just like an archer does with his bow.”

The fish’s strategy is evolutionarily clever. “This advantage would come without the evolutionary cost for the development of highly specialized internal structures dedicated to the storing of mechanical energy,” the authors noted.