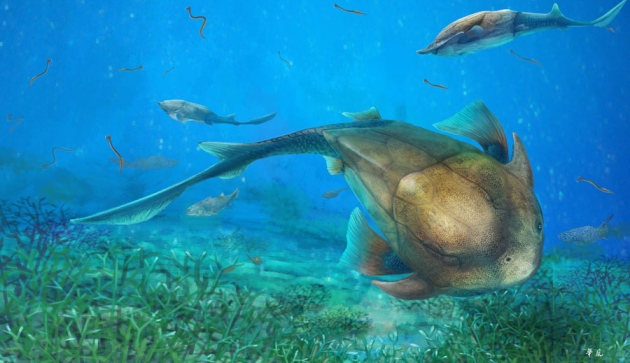 A fossil fish found in Yunnan, China, has filled in a gaping hole in how researchers thought the vertebrate jaw evolved.

The 423-million-year-old specimen, dubbed Qilinyu rostrata, is part of an ancient group of armoured fish called placoderms. The fossil is the oldest ever found with a modern three-part jaw, which includes two bones in the upper jaw and one in the lower jaw. Researchers reported their find on 20 October in Science1.

Scientists had thought that placoderm jaws were only very distantly related to the three-part jaw found in modern bony fish and land vertebrates, including people. This was because the bones in placoderm jaws generally sit further inside the animals’ mouths than do human jawbones, and they don’t contribute to the outer structure of the face, says Per Ahlberg, a palaeontologist at Uppsala University in Sweden and a co-author of the study.

But Qilinyu has bones halfway between an ancient placoderm jaw and a modern jaw. “They contribute to the face, but the bits inside the mouth look suspiciously like” placoderm jaw bones, says Ahlberg. This rewrites the previous understanding that placoderm jaws and modern jaws evolved completely independently.

“You know that old thing where you have a picture of a vase and you suddenly realize that it’s two human profiles facing each other? It was like that,” Ahlberg recalls. “You realize that what everybody else has ruled out is in fact not only not ruled out, but is in fact the crushingly obvious interpretation.”

Something to chew on

This view of jaw evolution was first suggested, although not entirely confirmed, by the 2013 report2 of Entelognathus primordialis. That specimen is a 419-million-year-old placoderm with bony-fish-like jaws, which was found at the Xiaoxiang fossil site in Yunnan. Qilinyu was discovered at the same site, by the same team — led by palaeontologist Min Zhu at the Chinese Academy of Sciences’ Institute of Vertebrate Paleontology and Paleoanthropology in Beijing. The fossil is older than Entelognathus, and its jaw is more clearly intermediate between ancient placoderms and modern bony fish.

Qilinyu was about 20 centimetres long and looked like a catfish, with a flat pointy bit sticking out of its snout. “It reminded me of a platypus, having this big snout with a flat bill,” says John Long, a palaeontologist at Flinders University in Adelaide, Australia.

Zhu and his colleagues found several specimens of Qilinyu. The most complete fossil, which was used to describe the new species, was uncovered from Xiaoxiang’s muddy limestone in 2012, but was missing its lower jaw. Early in 2016, Zhu’s group found a lower jaw from another specimen, then four more, providing a complete picture of the animal’s jawbones.

“It confirms what the scientific consensus has been leaning toward” since Zhu’s group found Entelognathus, says Sam Giles, a palaeobiologist at the University of Oxford, UK. The find also shows how early placoderms filled very different ecological niches, she says. Qilinyu’s mouth is on its underside, indicating that it was probably a bottom-feeder, whereas Entelognathus’s forward-facing mouth suggests a different style of feeding.

Xiaoxiang is “a spectacular site”, says Giles. “Before this locality, everyone thought there wasn’t much going on in this period.” But it has turned out to be incredibly diverse, she notes.

The site used to be an ancient tropical bay that was both geographically and biologically isolated from other oceans, says Zhu. That isolation cultivated a diversity that he has not even come close to fully cataloguing. Zhu says that his team has collected more than 20 other new fossil forms that are waiting to be prepared and described.