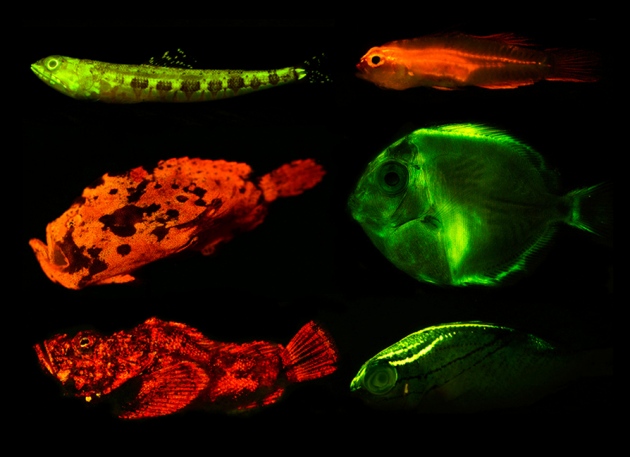 The spectacular colors produced by fish biofluorescence may act as biological signals.

Fish that appear drab to human eyes may see each other decked in brilliant greens, reds and oranges, say scientists who have found the first evidence of widespread biofluorescence in the animals.

More than 180 species of fish, from at least 50 taxonomic families, can absorb light and re-emit it as a different color, researchers report today in PLoS ONE1. Caught by cameras fitted with yellow-colored filters, fish such as the flathead (Cociella hutchinsi), found in the tropical Pacific Ocean, become show stoppers.

"It's like they have their own little private light show going on," says John Sparks, a curator of ichthyology at the American Museum of Natural History in New York who helped to lead the work. "We were surprised to find it in so many."

To conduct their survey, researchers — working with photographers and videographers — sampled waters near the Bahamas and the Solomon Islands, two taxonomically rich regions. The team also surveyed freshwater species from Madagascar, the Amazon, and the US Great Lakes region, as well as fish from pet stores and public aquaria.

The researchers found biofluorescence in both cartilaginous fish, such as sharks and rays, and bony fish, such as eels and flatfishes. That the phenomenon appears in groups separated by more than 400 million years of divergent evolution suggests that it evolved independently many times, Sparks says. Biofluorescence — which is distinct from bioluminescence, the production of light by a living organism through a chemical reaction — is also seen among some corals, cnidarians, arthropods and parrots.

In fish, biofluorescence seems to be most common in marine species. Sparks speculates that this is because the ocean is a relatively stable environment, permeated by clear blue light. As water depth increases, the majority of the visible light spectrum is absorbed, save for high-energy blue wavelengths. Freshwater and deep-water biofluorescent fish exist, but are rare. Instead, the fish most commonly, spectacularly and variously bedecked tend to be camouflaged fish in coral reefs. 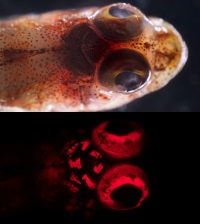 The triplefin blennie (Enneapterygius sp.) is drab under white light (above) but fluoresces brightly under blue light (below).

Many of these fish have yellow filters in their eyes, which may detect biofluorescent patterns as an interspecies 'hidden signal'. For example, some marine fishes spawn in unison under a full moon, and glowing fluorescently in the moonlight may help fish recognize each other.

The findings pave the way for further research into the ecological role of biofluorescence, says Dimitri Deheyn, a marine biologist at the Scripps Institution of Oceanography in La Jolla, California, who was not involved in the study.