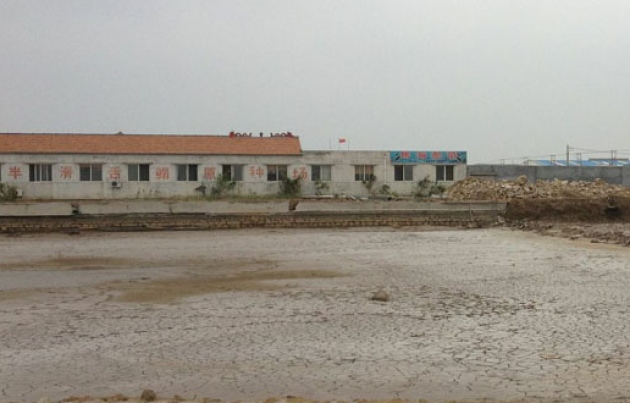 Groundwater extraction for fish farms can cause land to sink at rates of a quarter-metre a year, according to a study of China’s Yellow River delta1. The subsidence is causing local sea levels to rise nearly 100 times faster than the global average.

Global sea levels are rising at about 3 millimetres a year owing to warming waters and melting ice. But some places are seeing a much faster rise — mainly because of sinking land. Bangkok dropped by as much as 12 centimetres a year in the 1980s thanks to groundwater pumping. Oil fields near Houston, Texas, experienced a similar drop during the 1920s because of oil extraction. Deltas can also sink as old river sediments compact under their own weight and water carrying replacement sediments is held back by dams or diverted for irrigation. “You can get crazy rates of sea-level rise,” says James Syvitski, a geologist at the University of Colorado Boulder and a co-author of the study, published online in Geophysical Research Letters1.

The researchers found that parts of the Yellow River delta are dropping by up to 25 centimetres a year, probably because of groundwater extraction for onshore fish tanks. The link between aquaculture and subsidence has attracted little international notice. “This is a new one on me,” says Stephen Brown, a fisheries scientist at the US National Marine Fisheries Service in Silver Spring, Maryland. “We are concerned about the effect of sea-level rise on fish; not the other way around,” he says. 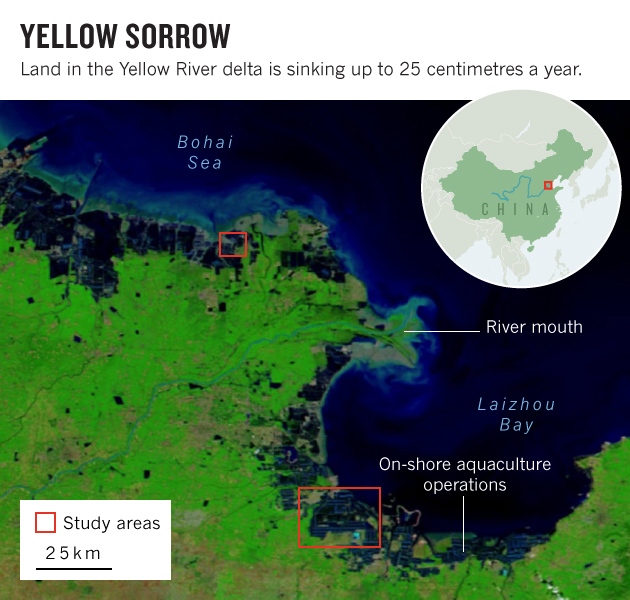 Robert Nicholls, who studies coastal engineering at the University of Southampton, UK, and who co-authored the chapter on coastal management for the 2007 Intergovernmental Panel for Climate Change report, is likewise surprised by the link. “I would not have thought of this as an issue previously,” he says.

Subsidence was not mentioned in the United Nations Food and Agriculture Organization’s 2012 report on the state of world aquaculture, says Stephanie Higgins, a PhD geology student at the University of Colorado Boulder who led the study. “This is not yet on the industry’s radar, but it should be,” she says.

The Yellow River delta has been sinking for decades. Between 1976 and 2000, the shoreline receded by 7 kilometres. In the late 1980s, 30-metre-thick sea walls were built to stop erosion and protect oil rigs on land. But no one had measured the vertical subsidence or pinpointed the cause.

Higgins and her colleagues used satellite-radar images to measure subsidence near the Yellow River delta. This technique requires a hard, reflective surface, such as a paved road, to get accurate readings, so is used mainly in urban areas. But in the Yellow River region, the roofs of fish farms served that purpose.

Dams on the river have cut the flow of sediment to one-tenth of its normal levels, but this probably accounts for only a few millimetres per year of the overall subsidence, says Higgins. And the subsidence they saw was most extreme near fish farms, rather than nearby oil fields.

Asia produces 89% of the world’s farmed fish and shrimp, much of it in river-delta regions freshened with groundwater, says Higgins. Planners should be aware of the impact that this kind of aquaculture can have on local sea-level rise, she says, and regulate groundwater extraction accordingly.