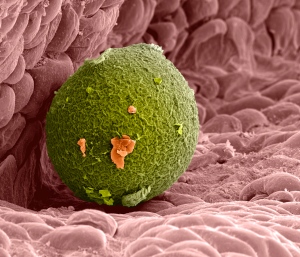 Researchers have uncovered some of the steps that enable human stem cells to develop into egg cells.

The causes of infertility, which affects around 10% of couples, are often unknown, but may in some cases result from the body's inability to produce viable gametes — also known as sperm and egg cells. The first study of the development of such 'germ cells' from humans could help scientists to learn how to create them in the laboratory instead.

Even though the reproductive age for humans is around 15–45 years old, the precursor cells that go on to produce human eggs or sperm are formed much earlier, when the fertilized egg grows into a tiny ball of cells in the mother’s womb. This ball of cells contains ‘pluripotent stem cells’ — blank slates that can be programmed into any type of cell in the body — and researchers are hoping to use these stem cells to treat various conditions, including infertility.

But little is known about the early developmental stages of human gametes — owing to the sensitivity of working with human tissue — and most work in this area has been conducted using mice. In a Nature Cell Biology paper today1, researchers from the University of California, Los Angeles, trace the development of early germ cells in human fetuses of between 6 to 20 weeks and analysed when genes were turned on or off.

The DNA within these early germ cells carries 'epigenetic modifications' — structural changes that do not affect the DNA sequence itself but do affect the way that genes are expressed. These changes may have accumulated during the parents’ lives, and need to be erased during the fetal stage. The study found two major events that wipe out, or reprogram, epigenetic modifications. Most of this reprogramming happened before 6 weeks, but the authors found a second event that completes the reprogramming after 6 weeks.

“This is an important and fundamental paper for understanding human germ-line cells and finding the basic information about human germ-cell biology,” says reproductive biologist Evelyn Telfer of the University of Edinburgh, UK. “The researchers are clearly working in an uncharted area.”

The Los Angeles team worked with anonymized samples from aborted fetuses (after consent) from the University of Washington's Birth Defects Research Laboratory in Seattle.

The researchers also observed that 6-week-old germ cells created in the lab do not match a 6-week-old human germ cell, suggesting that there is a blockage in the development of lab cells that scientists are failing to understand.

“Next, we need to look at what is missing to coax immature germ cells to become eggs or sperm in the lab. If we have no road map to follow, then we are just guessing. Now we have a snapshot of what these cells should look like, we can start to try and mimic them,” says study co-author Amander Clark.