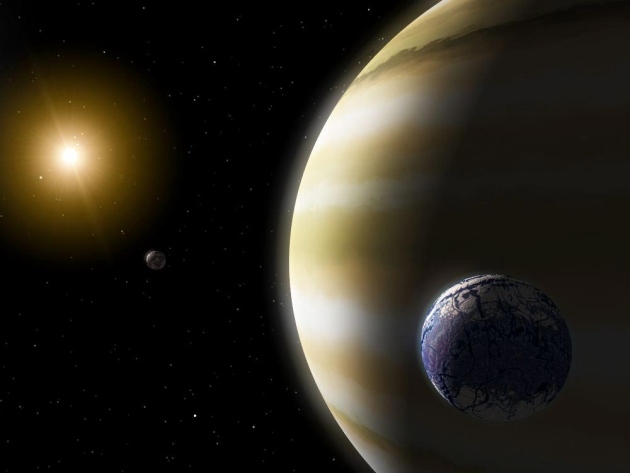 Many exoplanets may have moons orbiting them.

Even as the number of planets known beyond the Solar System climbs above 1,000, the discovery of an accompanying exomoon has remained elusive — until, perhaps, now.

Many exoplanets probably have moons orbiting them. Some of those moons might even be large enough, and have an atmosphere, to host extraterrestrial life.

On a June night two years ago, a telescope in New Zealand captured a momentary brightening of a star in the constellation Sagittarius. It was an occurence of a rare phenomenon known as microlensing, in which a star or planet or other celestial object passes directly between Earth and a more distant star, gravitationally magnifying the light of the faraway star.

After sifting through detailed observations of this event, astronomers proposed that the intervening object could be either a smallish star with a Neptune-sized planet orbiting it, or a largish planet with a moon orbiting it.

If the latter possibility is confirmed, it would be the first ever detection of an exomoon. The problem is that there is no way to repeat the observation and know for sure.

“It’s kind of a shame because we’ll probably never know what the answer is,” says David Kipping, an astronomer at the Harvard‒Smithsonian Center for Astrophysics in Cambridge, Massachusetts, who was not involved in the research.

The possible discovery was reported in a paper posted on 13 December on the arXiv preprint server1. It comes from a group of scientists studying microlensing that is led by David Bennett, an astrophysicist at the University of Notre Dame in Indiana. He declined to speak about the work until it is published in a peer-reviewed journal.

Once the telescope in New Zealand spotted the brightening, other telescopes in the Southern Hemisphere, as well as one of the Keck telescopes in Hawaii, were turned to watch it. From measurements taken by these telescopes of how the star’s brightness changed over time, Bennett’s team deduced the type of object that had passed through the telescopes' field of view.

The star's light didn't brighten in a single sharp peak, but smeared out as if two objects had magnified the light. From the data the scientists calculated the most likely possibilities for what the masses of what these two objects would be — which depends on the unknown parameter of how nearby they are. If they are relatively close to Earth, then they could be a relatively lightweight planet and its moon. If they are more distant, they could be a heavier star with a planet.

Either way, the pair of objects is roaming deep space on their own, an observation that raises questions about how an exoplanet and its exomoon could get that way. At least one earlier microlensing study has hinted that there could be billions of rogue planets wandering the cosmos, unbound to any star. But they are likely to have been kicked out of their stellar systems through violent gravitational interactions, and in the process lost any accompanying moons. “An apparently free-floating planet with a half Earth-mass moon would be a new class of system that was not previously known to exist,” Bennett and his team write. “Such a new discovery would require strong evidence, so our favored model for this event is that it is a low-mass star or brown dwarf orbited by a planet of about Neptune’s mass.”

That pessimistic conclusion does not deter Kipping. He leads a project hunting for exomoons using data from NASA’s planet-finding Kepler spacecraft, which monitors the sky looking for regular dips in light when a planet crosses in front of a star. Of the more than 3,500 candidate exoplanets that Kepler has found, about 300 of them have orbital characteristics that make them capable of holding onto a moon, Kipping says. Of those, at least 150 show hints in the data that could be explained by the presence of an exomoon.

One by one, his team is crunching through detailed studies to either confirm or rule out each possible exomoon. “The beauty of what we have is that we can see events over and over again, whereas microlensing has one snapshot,” says Kipping.

On many of those later passes, tantalizing hints of exomoons disappear. He still has a lot of data to work through, though. ”We've barely scratched the surface,” he says.