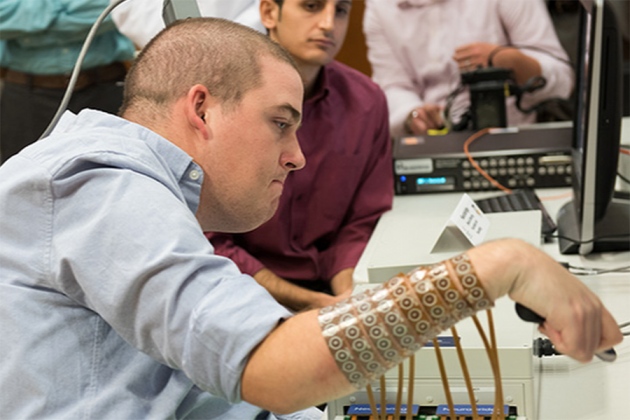 A quadriplegic man who has become the first person to be implanted with technology that sends signals from the brain to muscles — allowing him to regain some movement in his right arm hand and wrist — is providing novel insights about how the brain reacts to injury.

Two years ago, 24-year-old Ian Burkhart from Dublin, Ohio, had a microchip implanted in his brain, which facilitates the ‘reanimation’ of his right hand, wrist and fingers when he is wired up to equipment in the laboratory. Researchers led by Chad Bouton, currently at the Feinstein Institute for Medical Research in Manhasset, New York, have been studying Burkhart ever since, and publish their results on 13 April in Nature1.

Previous studies have suggested that after spinal-cord injuries, the brain undergoes 'reorganization' — a rewiring of its connections. But this new work suggests that the degree of reorganization occurring after such injuries may be less than previously assumed. “It gives us a lot of hope that there are perhaps not as many neural changes in the brain as we might have imagined after an injury like this, and we can bypass damaged areas of the spinal cord to regain movement," says Bouton. Previously, such a ‘neural bypass’ had been done in monkeys, and brain signals had been decoded in people and used to animate a robotic prosthetic arm, but this is the first time a person has had their own body part reanimated.

Burkhart — who is paralysed from the shoulders down but can move his shoulders and, to a small extent, his elbow — broke his neck after diving into waves during a beach holiday when he was 19. He later discovered that 25 minutes away from his home, researchers at Ohio State University in Columbus were developing the reanimation technology and decided to volunteer to have the microchip implanted.

Bouton and his colleagues took fMRI (functional magnetic resonance imaging) scans of Burkhart’s brain while he tried to mirror videos of hand movements. This identified a precise area of the motor cortex — the area of the brain that controls movement — linked to these movements. Surgery was then performed to implant a flexible chip that detects the pattern of electrical activity arising when Burkhart thinks about moving his hand, and relays it through a cable to a computer. Machine-learning algorithms then translate the signal into electrical messages, which are transmitted to a flexible sleeve that wraps around Burkhart’s right forearm and stimulates his muscles. “The first day we hooked it up I was able to get movement, and open and close my hand,” he says (see 'Ian talks about his new-found movement')

Ian talks about his new-found movement

How did you come to be paralysed?

I was on vacation with some friends. We were playing in the ocean and I dived into a wave that pushed me down into a sandbar and I broke my neck. The next day, I was told I’d be paralysed for the rest of my life. When you’re 19 years old, you think you’re invincible. But that quickly, all of your independence is taken away.

How did it feel the first time that you were plugged into the system?

The first day that we hooked it up I was able to get movement. It was something really small — being able to open and close my hand — but it was something that I hadn’t been able to do for about three years. So it reinstated a lot of hope that people with my kind of injury won’t just have to settle. Since then, we’ve been able to do a bunch of things that someone with my kind of injury should not be able to do.

Is it uncomfortable having an access port in your skull?

At first I would get headaches, and if I happened to bump the pedestal, that would really hurt. Now, I don’t really notice it’s there. It’s protected with a little cap, and it just feels like an extension of me.

What are your hopes for the future?

I’d really like to be able to take the system home with me. Not being able to walk doesn’t really matter to me because you can do a lot from a wheelchair, but if I was able to use my hands I would be a lot more independent than I currently am. But even if it’s something that I can never take home in my lifetime, I’m glad I’ve had the opportunity to take part in this study. I’ve had lots of fun with it. I know that I’ve done a lot of work to help other people as well.

Since then, he has been attending training sessions up to three times a week. As a result, Burkhart is currently able to make isolated finger movements and perform six different wrist and hand motions, enabling him to, among other things, pick up a glass of water, and even play a guitar-based video game.

The study provides insights into the brain’s ability to adapt to and exploit new situations. “It is interesting that, even some years after injury, when these circuits have presumably been sitting there not able to do much, that they still seem to be related to hand movements and haven’t been co-opted by something else,” says Andrew Jackson at Newcastle University, UK, who is separately developing a neural prosthesis to overcome spinal-cord injury.

Burkhart’s brain has also learned to coordinate the activity of his reanimated hand with muscles that he already has some control over. His ability to maintain grip while moving objects has gradually improved, and this has been associated with significant changes in his brain activity. The algorithms developed by Bouton’s team register and adapt to such changes in brain activity — effectively learning with the patient and fine-tuning his movements.

There are limitations on the freedom that the device affords Burkhart. The system can be used only in the laboratory and currently needs to be recalibrated at the start of each session. “This process is time-consuming and relatively technical,” says Jackson. “What we’d really like is neural interfaces that are stable from day-to-day and don’t require recalibration.”

US regulators move on thought-controlled prosthetics

Burkhart also can’t feel the objects that he’s manipulating; providing the brain with sensory feedback from his hand would enable him to adjust his grip strength more effectively, and to pick up objects that he can’t see.

It's not yet clear whether a neural bypass would work in people who don't have the type of residual elbow and shoulder movement that Burkhart does, or in people whose muscles are always contracted, a relatively common problem. “Being able to combine the recording of brain signals and produce the muscle contractions to make the hand do the correct things is a big step, but we’re still at a point where we’re talking about something that would benefit a small number of people,” says Elizabeth Tyler-Kabara, who directs the Neural Enhancement Laboratory at the University of Pittsburgh.