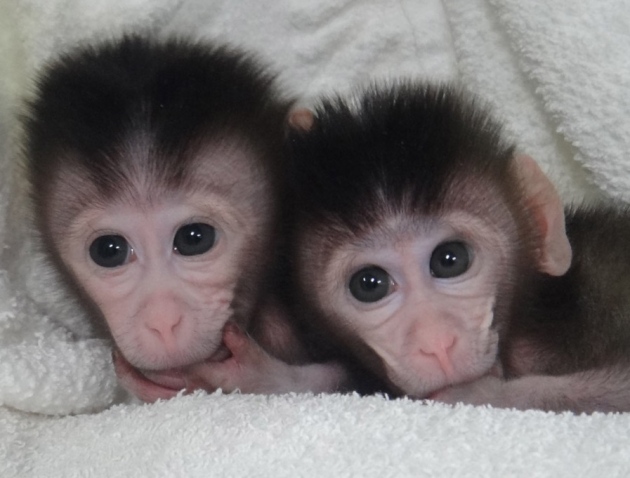 Twin cynomolgus monkeys born in China are the first with mutations in specific target genes.

The ultimate potential of precision gene-editing techniques is beginning to be realised. Today, researchers in China report the first monkeys engineered with targeted mutations1, an achievement that could be a stepping stone to making more realistic research models of human diseases.

Xingxu Huang, a geneticist at the Model Animal Research Center of Nanjing University in China, and his colleagues successfully engineered twin cynomolgus monkeys (Macaca fascicularis) with two targeted mutations using the CRISPR/Cas9 system — a technology that has taken the field of genetic engineering by storm in the past year. Researchers have leveraged the technique to disrupt genes in mice and rats2, 3, but until now none had succeeded in primates.

"This is an important step," says Feng Zhang, a synthetic biologist who was not involved in the study, but who has helped to develop CRISPR technology at the Massachusetts Institute of Technology in Cambridge. "It shows that the system is working."

Transgenic mice have long dominated as models for human diseases, in part because scientists have honed a gene-editing method for the animals that uses homologous recombination — rare, spontaneous DNA-swapping events — to introduce mutations. The strategy works because mice reproduce quickly and in large numbers, but the low rates of homologous recombination make such a method unfeasible in creatures such as monkeys, which reproduce slowly.

"We need some non-human primate models," says Hideyuki Okano, a stem-cell biologist at Keio University in Tokyo. Human neuropsychiatric disorders can be particularly difficult to replicate in the simple nervous systems of mice, he says.

Previous attempts to genetically modify primates have relied on viral methods4, 5, which create mutations efficiently, but at unpredictable locations and in uncontrolled numbers. Prospects for primates brightened with the emergence of the CRISPR/Cas9 gene-editing system, which uses customizable snippets of RNA to guide the DNA-cutting enzyme Cas9 to the desired mutation site.

Huang and his team first tested the technology in a monkey cell line, disrupting each of three genes with 10–25% success. Encouraged, the scientists subsequently targeted the three genes simultaneously in more than 180 single-celled monkey embryos. Ten pregnancies resulted from 83 embryos that were implanted, one of which led to the birth of a pair with mutations in two genes: Ppar-γ, which helps to regulate metabolism, and Rag1, which is involved in healthy immune function.

Stem-cell researcher Rudolf Jaenisch of the Whitehead Institute for Biomedical Research in Cambridge, Massachusetts, calls the result an interesting demonstration, but says that it offers little scientific insight. "The next step is to see if we can learn anything from it," says Jaenisch, who pioneered the use of transgenic mice in the 1970s.

The combined mutations in Ppar-γ and Rag1 do not represent a particular disease syndrome, says Huang, although each gene is associated with human disorders.The group has yet to fully analyze the monkeys' condition, and must run further tests to assess whether the mutations occurred in all ot the animals' cells."Our first aim was to get it done, to get it to work," Huang says. But the finding suggests that researchers could one day model other human conditions involving multiple mutations.

The race is already on to create more CRISPR-modified monkeys, and with greater reliability. Zhang and his colleagues are working to optimize the technology for primate cells, in order to boost mutation efficiency. Okano's team is analyzing unpublished results from monkey models of autism and immune dysfunction, recently created with older gene-editing technologies; they, too, are now trying their luck with CRISPR. And Huang's group is expecting results from eight other pending pregnancies.

"There are a lot more things to do," says Huang.