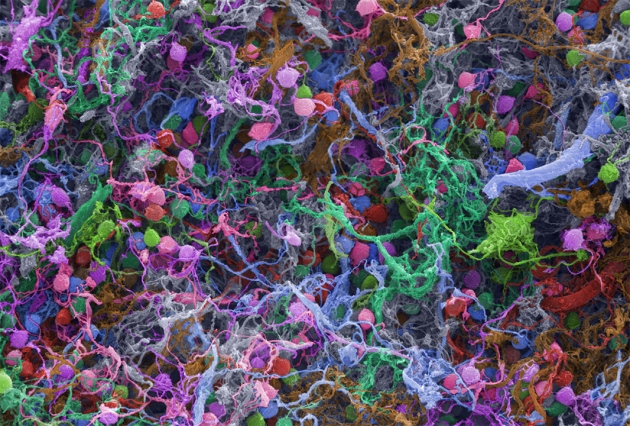 Fresh human brain tissue is a vanishingly rare resource for neuroscientists. Now, data on small bits of live human brain tissue that normally get discarded during surgery are being added to a publicly available database that could help to unravel how cognition works. On 25 October, researchers at the Allen Institute for Brain Science in Seattle, Washington, who compile neuroscience tools including large-scale databases and brain maps, announced that they had published their first data from living human brain cells.

Most human-brain studies use either images of functioning brains obtained by scanning volunteers or slices of dead organs from cadavers. The images and information now added to the database will let researchers analyse the molecular content of individual living cells, or neurons, and, ultimately, identify the biological basis of their behaviour. Until now, the database had contained information only about mouse brains.

Small studies using surgical human brain samples began very tentatively in the 1970s but the large amount of human data now published by the Allen Institute — the most extensive and systematic effort so far — has been welcomed as a major aid to identifying the uniqueness of the human brain.

With their patients’ consent, neurosurgeons in the Seattle region donated small pieces of brain that they would otherwise have discarded during surgery. The pieces are bits of the outer layer called the cerebral cortex that they needed to snip out to access diseased tissue deeper in the brain.

The cortex processes higher-level activities, including the deep introspection and abstract reasoning that is thought to be specifically human. “Finding out what the detailed differences are between the mouse and human brain will help us understand what makes us unique among species,” says Christof Koch, president and chief scientific officer of the Allen Institute.

The first slew of human data includes the electrical properties of 300 different types of neuron from 36 people, along with 3D reconstructions of the spidery shapes of some of them, and computer models that simulate their electrical behaviour. It also includes gene-expression profiles of 16,000 individual cells from the brains of another 3 people. Scientists around the world may now compare these data with those from mice to generate hypotheses about where key differences lie.

“This database is a major service to the scientific community,” says Huib Mansvelder, a neuroscientist at the Free University of Amsterdam and an early pioneer of research on fresh human brain cells. He and his colleagues have shown1, for example, that human neurons have a lower capacitance than mouse neurons, which makes them quicker to start firing and quicker to transfer information. They also have more intricate shapes. “But the Allen’s industrial approach takes the endeavour to a whole new level,” he says.

The lumps of donated tissue are each about the size of a sugar lump — typically the same volume as an entire mouse brain. Cut into slices 300–350 micrometres thick, the cells remain alive and active for three days, giving scientists ample time to take measurements. Mouse neurons, by contrast, tend to degenerate within hours.

Only a few research centres worldwide study fresh human brain tissue, partly because until recently few brain surgeons had been inspired to work with it. But rapid developments in biological research tools have increased the scientific rewards for doing so.

The Allen Institute now plans to increase the number of human brain cells in its database and the amount of information available from each of them. It aims eventually to include full RNA profiles to indicate which genes are active in the tissue. The next phase will also analyse the connections between the cells. However, the work cannot be as comprehensive as studies of mouse brains, because only small pieces of living human brains can be removed, whereas the whole brains of mice can be examined.

There is another concern about the human tissue. Although apparently healthy, the cells come from surgery to remove tumours or treat severe epilepsy, which provokes concerns that their properties might have been altered by their pathological environment. However, Mansvelder has compared cortical tissue from people with cancer with that from people with epilepsy, and found them to be very similar. The Allen Institute has confirmed these results.

There is another advantage to using human cortical tissue. Neurosurgical teams collect vast information about the brain functions of their patients before and after operations. With appropriate anonymization, this can be correlated with cellular properties. At a meeting of the Federation of European Neuroscience Societies in Pécs, Hungary, on 20–23 September, Mansvelder presented data showing that IQ correlates with the threshold of firing of cells — the higher the IQ, the lower the threshold.

Mansvelder, along with fellow neuroscience pioneer Gábor Tamás of the University of Szeged in Hungary and groups from Israel and Sweden, will collaborate with the Allen Institute to develop the human-brain database further, thanks to a US$19.4-million grant from the US National Institutes of Health, announced on 23 October.