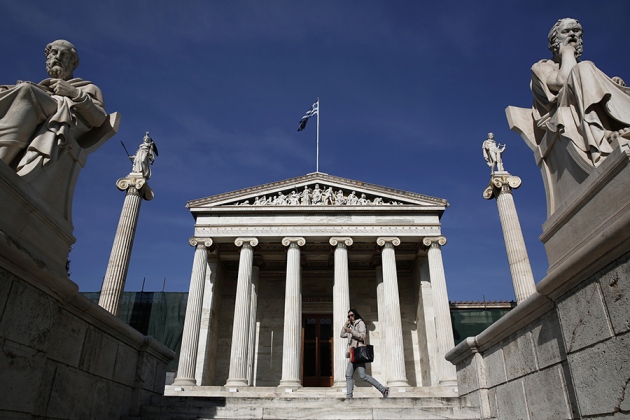 Blue-skies research in Greece gets a boost after six years of economic strain.

A massive loan from the European Union’s investment bank gives Greek researchers their first ray of hope since the debt crisis hit six years ago: a government-backed plan to create a Greek research agency.

Dubbed the Hellenic Foundation for Research and Innovation (HFRI), it will issue regular calls for basic research proposals, fill requests for research equipment and award fellowships for young scientists.

Its funder, the European Investment Bank (EIB) in Luxembourg, generally finances projects that contribute to growth and employment, including many green-energy and water-security programmes. So the decision to support Greek research came as a surprise to some. “At first we hadn’t believed that the EIB would pay for blue-skies research,” says Greek research minister Costas Fotakis, a former laser physicist.

The EIB says that the HFRI is crucial to halting Greece’s startling brain drain: graduates and postgraduates have left Greece in droves since the crisis began.

On 15 July, the bank approved the €180-million (US$200-million) loan, which the Greek government will top up with €60 million. The total will support the HFRI during its first two-and-a-half years. The EIB rarely loans more than 50% of the cost of a project, but the 28 EU member states voted unanimously to make an exception, says EIB spokesman Richard Willis.

“Given the key issues around fundamental research in Greece, 75% was seen as justified,” he says. “It is about competitiveness, forward-thinking and the future.”

The EIB does not make the detailed conditions of its loans public, but Willis says that the terms for the HFRI are very attractive and that Greece has a full 15 years to repay the money. If the HFRI is successful, the bank will consider additional loans in the future, he adds.

A parliamentary bill to establish the agency is currently being discussed. It proposes that the HFRI operate along the lines of the US National Science Foundation and the DFG, Germany’s main funding agency — and without direct political influence.

“For the first time we’ll have some regularity in research funding in Greece,” says Nektarios Tavernarakis, director of the FORTH Institute of Molecular Biology and Biotechnology (IMBB) in Heraklion, Crete. “It will definitely help make Greece a more attractive place to do research.”

Tavernarakis, who in April won his second grant from the prestigious European Research Council, knows from bitter experience how hard it is to persuade ambitious young scientists to join even a high-performing research institute like his own. When the debt crisis hit a peak last July, triggering bank closures, the resulting controls on the flow of capital out of the country frightened off candidates who had previously been prepared to work at the IMBB, he says. “And that was quite understandable.”

Fotakis says that the HFRI is a key part of government strategy to increase the country’s potential. He blames the Greek brain drain on the austerity measures imposed by the European Commission, the European Central Bank and the International Monetary Fund in exchange for keeping the country from bankruptcy. “They have lowered wages and pensions, and made all aspects of research difficult,” he says.

Because parliament is unlikely to pass the HFRI bill before September, Fotakis plans to launch calls for some PhD and postdoctoral grants immediately. Even before the crisis, Greece has been one of the lowest investors in research in the EU. But once the crisis began, calls for research proposals, which were always modest and irregular, nearly disappeared. Scientists had to survive on international funding sources, particularly those from the EU.

The country still manages to host several internationally competitive research centres, but Fotakis says that even this is not sustainable. “Scientific output is obviously not going to be sustained for ever when the brain drain is so intense.”

The initial total of €240 million earmarked for the agency will support fundamental research, but the HFRI will eventually support a second stream for translational research.

Beyond 2018, Fotakis expects the government to support the fundamental research stream with an annual €20 million. “And now that the EIB has demonstrated its confidence in Greek science with this loan, it’ll be much easier to attract other sources of financing to the HFRI,” he says.

Greece fixed a few more bugbears when it passed a general law on research in May — for example, researchers will now be able to top up salaries for themselves and their groups if they bring in outside grants.

No one imagines that the problems of Greek science are now solved. “Still,” says Tavernarakis, “these measures show things are at least going in the right direction.”