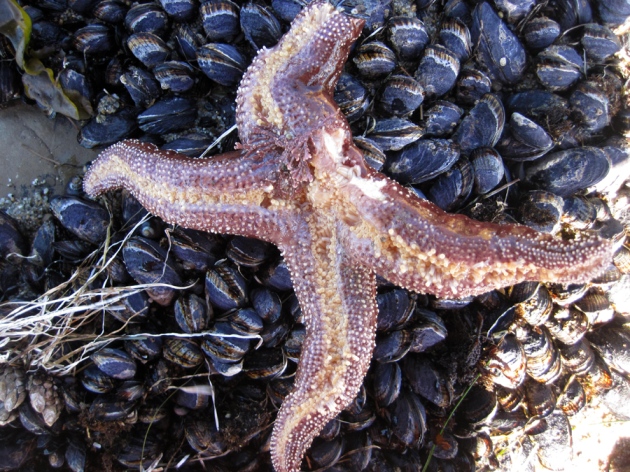 This sea star lost one of its arms after contracting a mysterious wasting disease.

A virus is the likely culprit in a massive, ongoing die-off of sea stars along the Pacific Coast of North America, researchers report on 17 November in the Proceedings of the National Academy of Sciences1.

Their intense, year-long investigation has zeroed in on a densovirus (from the family Parvoviridae) that has been present in the Pacific Ocean since at least 1942. But a mystery remains: why the virus seems to have suddenly bloomed into an outbreak that has devastated marine life from Alaska to Baja California.

Sea-star wasting disease is a poorly understood condition in which sea stars decline from apparent good health into melted piles of goo over a matter of days. The latest outbreak emerged along the Olympic Peninsula in Washington in June 2013, where its effects were not severe. But the disease has spread rapidly to several sites along the Pacific coast, decimating populations of about 20 species of sea star.

Since then, its reach has expanded, and the disease has even returned to the Olympic Peninsula with a vengeance. “We don't seem to be at the end of this yet,” says Peter Raimondi, a marine ecologist at the University of California, Santa Cruz, and a co-author of the study.

From the outbreak's early days, anecdotal evidence pointed to a viral cause. Aquaria that sterilized the sea water in their tanks using ultraviolet light or that made their own saline tank water — such as Seattle Aquarium and the California Academy of Sciences in San Francisco — had healthy sea stars. Aquaria that used untreated or sand-filtered sea water (which excludes most bacteria and protozoa) saw their sea stars develop the telltale lesions associated with the wasting disease.

Researchers examined tissues from diseased and apparently healthy individuals collected at the same sites, but saw no bacterial or protozoal infections associated with the wasting disease. Deciding to focus on viruses, they sequenced the viral DNA from samples of healthy and diseased individuals.

“There really was only one group, densoviruses, that stood out as being associated with diseased tissues more than the healthy tissues,” says first author Ian Hewson, a microbial ecologist at Cornell University in Ithaca, New York. To confirm that initial finding, the team added viruses from diseased sea-star tissue to tanks of healthy sea stars. These animals became ill in about a week, whereas a control population treated with heat-killed viruses remained healthy. When a viral inoculum from the diseased stars was added to new populations, they also sickened.

“It's pretty persuasive evidence,” says Curtis Suttle, a marine virologist at the University of British Columbia in Vancouver who was not involved in the work. Suttle says that the finding offers a window into what viruses — which are astoundingly abundant in surface sea water, at an estimated 10 million per millilitre2 — are doing in marine environments.

“We have almost no understanding of the relationship between viral pathogens and mortality in natural sea creatures,” says Suttle. Most information that is available concerns economically important species, or those considered “charismatic macro-fauna”, such as seals, Suttle says. With the new sea-star data in hand, “at least now we can start to look” for densovirus, he adds.

Now researchers hope to understand why the virus turned into a mass killer. Densovirus is not new: researchers found it in the preserved tissues of presumably healthy museum specimens dating back to the 1940s. It is also found in plankton, sediments and other marine animals, such as sea cucumbers and sea urchins.

No environmental factors have been found to correlate with either the onset or the progression of the disease in regional monitoring led by Raimondi. “At this point we have no idea why something that seems have been present [in the past] has all of a sudden become so lethal,” he says.

It is possible, however, that sea-star populations are on the verge of staging a comeback on their own. At Channel Islands National Park in southern California, biologists have been monitoring sea stars for more than 30 years. “I can tell you that sunflower stars are at the lowest density we've seen, since monitoring began,” says David Kushner, a biologist with the US National Park Service, which runs the site. “But we're also seeing a decent number of new juveniles” for some species. And for the moment, he says, those seem to be doing okay.