Geneticists, archaeologists and historians are joining forces to investigate the history of transatlantic slavery, in a €4.3-million (US$5.8-million) project launched today. The researchers say that the project is a unique opportunity to improve our knowledge of the slave trade, but warn that some of their results might be “uncomfortable”.

Between the sixteenth and nineteenth centuries, millions of people from west and central Africa were captured and shipped across the Atlantic by European slave traders to a life of forced labour in the Americas. The subject has been well studied by historians, but one of the coordinators of the project, geneticist Hannes Schroeder of the Center for GeoGenetics at the Natural History Museum of Denmark in Copenhagen, says that there are still “large gaps in our knowledge” regarding the origins of the people captured as slaves, for instance, and how the slave trade operated. 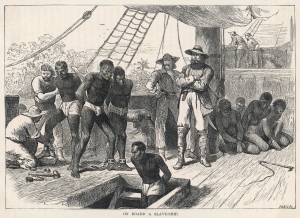 The history of the slave trade can be made clearer using genetic data.

“The historical records are fragmentary,” he says. “For example, they tend to mention just the port of export, rather than the ethnic or geographical origin of the person. The idea is that by bringing in genetics, we get a different view.”

Schroeder got the idea for the collaboration after studying isotopes of strontium, carbon, nitrogen and oxygen in the bones and teeth of slaves buried at the Newton plantation in southern Barbados. Archaeologists were keen to find a method to distinguish between first-generation captives and individuals who were subsequently born on the island, and to relate that to ancient African cultural practices such as filing teeth or burying grave goods with bodies.

Of 25 individuals studied, Schroeder showed that 7 were first-generation captives born in Africa, including one who had made the Atlantic crossing as a child1.

Schroeder was subsequently keen to use DNA to pin down the ethnic origins of slaves to particular regions within Africa, and to bring together researchers of different disciplines. The resulting project, called EUROTAST (for Europe and Trans Atlantic Slave Trade), is funded by a grant from the European Union’s Marie Curie network, and will support 15 researchers at 10 institutions in Denmark, the United Kingdom, Spain, France, the Netherlands, Portugal and Iceland.

Bioarchaeologists at institutions including the universities of Bristol and York, UK, will study the skeletal remains of enslaved Africans to investigate their demographics, health and quality of life, and use protein and isotope analysis to gain information about geographical origins and identify diseases such as scurvy and tuberculosis.

Meanwhile, historians at the University of Hull, UK, will compile and study written sources on the origins of African captives, and archaeologists based at the University of Leiden in the Netherlands will map and excavate plantations and slave villages in the Dutch Antilles.

But a large focus is on genetics. Several groups will study the DNA of modern populations, such as the Noir Marron people in French Guiana, to reconstruct the origins of Africans captured as slaves. The Noir Marron are direct descendants of slaves who escaped their Dutch masters during the era of plantation slavery, and have since interbred very little with other populations.

Researchers at the Center for GeoGenetics will study ancient DNA from enslaved Africans buried in the Caribbean, using more than 300,000 genetic markers on the nuclear genome. These are called ancestry informative markers2, and will help to distinguish between people from different populations in West Africa.

Matthew Collins, a bioarchaeologist at the University of York, who will lead one of the projects, says that EUROTAST may reveal controversial findings. These could include, for example, the extent of interbreeding with native Americans and Europeans among US populations who see themselves as purely African, and the role of African people in the slave trade.

“I think it’s going to be a very uncomfortable project,” he says. “It’s going to come out with some things that people don’t want to hear, but that’s one of the things that’s interesting about it.”

Because of this, the researchers plan to discuss their work with involved communities ahead of announcing the results.