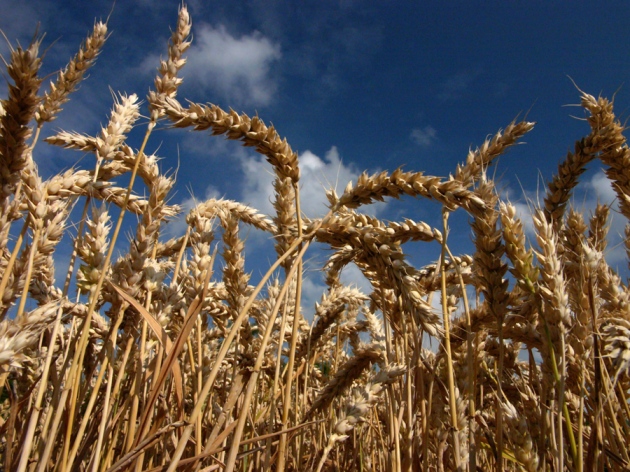 The staple that provides one-fifth of the world's calorie intake has an unusually intricate genome, due in part to its history of domestication.

A draft genome sequence of wheat promises to speed efforts to breed new types of one of the world’s most important crops — and to reveal the tangled genomic history of an ancient staple. In a suite of papers published today in Science1–4, the International Wheat Genome Sequencing Consortium has unveiled initial portraits of the genome from Triticum aestivum, better known as bread wheat.

The data are a long time coming. As fate would have it, the crop that feeds 30% of the human population and provides 20% of its calories is among the most punishing to sequence. The modern wheat genome is the product of multiple rounds of hybridization among different species. As a result, the genome now consists of three nearly identical 'subgenomes', each of which contains seven pairs of chromosomes. Distinguishing among genes on those three subgenomes has been a challenge for wheat geneticists.

The resulting 42 chromosomes are also riddled with repeated DNA sequences that make it difficult for algorithms to stitch together short sequence fragments into a coherent whole. The task was so daunting that researchers decided that they needed to manually isolate individual chromosomes for targeted sequencing.

The first complete genome sequence of a plant was announced in 2000. That genome — of the weed Arabidopsis thaliana — is smaller than any one of the 21 chromosome pairs of T. aestivum, notes Kellye Eversole, executive director of the International Wheat Genome Sequencing Consortium. In all, the wheat genome consists of 17 billion bases — more than five times more than the human genome — and contains about 124,000 genes1.

Of wheat's 21 chromosome pairs, the consortium has published a final ‘reference’ genome for only one, called chromosome 3B2. But the other sequences are following close behind, and the team aims to complete the entire genome in the next three years.

Wheat breeders say that the draft genome is already having an impact. “This is a game-changer,” says Jorge Dubcovsky, a wheat researcher at the University of California, Davis, who is not in the sequencing consortium. “It will accelerate all the projects to identify important agricultural genes.”

Agronomists are under pressure to boost wheat yields to match the demand of the growing human population, while also combating the effects of climate change on the crop

Having the genome in hand helps researchers to select genetic markers associated with relevant traits, such as resistance to disease or grain quality, and to identify candidate genes that are likely to affect important aspects of the plant’s growth, says Scott Haley, a wheat breeder at Colorado State University in Fort Collins. Haley’s group has been using the data since they were placed in a public repository late last year. “For conventional plant breeding, it’s a big step forward.”

One key advance is the improved ability to distinguish among nearly identical genes from the three subgenomes. A team led by geneticist Odd-Arne Olsen of the Norwegian University of Life Sciences in Ås used the draft sequence to show that the subgenomes do not share their work evenly: some tend to dominate in specific cell types or developmental stages3. This could be important information for breeders, says Olsen. It also suggests that researchers should now assess the contribution of each subgenome to their traits of interest. “Now we have a lot of work ahead of us,” he says.

The consortium also used the genetic data to revise the history of wheat domestication. The jumbled genomes of modern bread wheat have their roots in ancient hybridizations among three species. But analyses of the genome sequences suggest that the timing of those hybridizations might differ to what was previously thought, says Olsen4.

So far, the project has cost about €50 million (US$68 million), says Eversole. Completing the work is estimated to take nearly €12 million more. But all together, it willl still be cheaper than the original Arabidopsis sequencing effort, Eversole notes.

“People have asked me if this effort is really worth it,” says Haley. “I mean, come on. We absolutely have to have this information for wheat — it’s such an important food crop.”