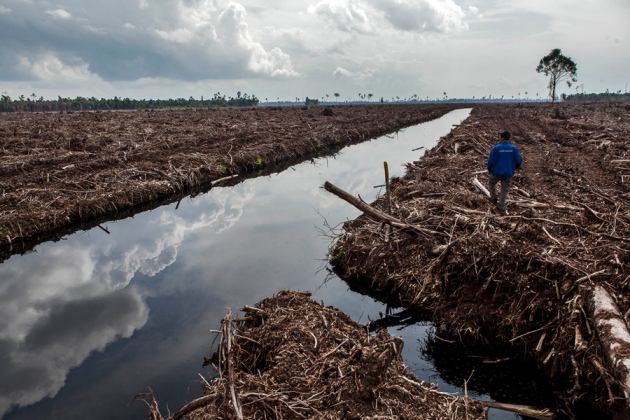 Forests in Indonesia are increasingly being levelled to make way for plants for pulp and paper production, as in this site in Sumatra.

Palm-oil plantations are generally though to be the main driver of deforestation in Indonesia, which is home to the world’s third-largest tropical forest and has the highest rate of forest loss. But fibre plantations — where species such as Acacia mangium are grown for use in pulp and paper production — now seem to be the main culprit.

Of the 14.7 million hectares of forest destroyed between 2000 and 2010, 12.8% was removed for fibre plantations, 12.5% for logging and 6.8% for palm-oil plantations; the remainder was removed for mixed concessions and mining1. All told, 45% of forest loss during the period occurred on land leased to industry.

“Palm-oil agriculture has borne the brunt of the blame for causing deforestation in Indonesia,” says Lian Pin Koh, a conservation ecologist at the University of Adelaide, Australia, who will present the findings on 21 July at a meeting of the Association for Tropical Biology and Conservation in Cairns, Australia. “Many of us are surprised that fibre plantations are in fact even more important than oil palm,” he says.

Koh and colleagues analysed data on forest loss and land leased for plantations, logging and mining in the five areas that hold the lion’s share of Indonesia’s forests, including Sumatra and Kalimantan. Their work is the first quantitative assessment of the drivers of forest loss in Indonesia.

Studies of deforestation have tended to focus on the impacts of palm oil, but there is an “urgent need” to better understand the effect of fibre plantations, the researchers say.

“It is of paramount importance to slow the rate of deforestation in Indonesia and Brazil to protect their remaining biodiversity and reduce the amount of carbon dioxide lost to the atmosphere,” adds Koh.

In 2011, Indonesia stopped issuing permits to firms wishing to clear forests on roughly 64 million hectares of its land. But the ban does not revoke existing licences.

The moratorium has not slowed forest loss, but it is a “sign that the government of Indonesia has got the message” that it needs to tackle deforestation, says Fred Stolle, who leads a programme on Indonesian forests for the World Resources Institute, a non-profit research organization in Washington DC.

Frances Seymour, a forest-policy researcher at the Center for Global Development, an independent research institute in Washington DC, applauds the latest wave of commitments to stop deforestation from companies such as Wilmar International — the world’s largest palm-oil company. Pressure should be applied to those companies that have not yet made such commitments, such as Asia Pacific Resources International — Indonesia’s second-largest pulp and paper producer, she says.

Seymour, former head of the Center for International Forestry Research in Bogor, Indonesia, calls on the incoming Indonesian president, who is expected to be confirmed later this month, to honour the commitments to halting forest loss made by the outgoing president Susilo Bambang Yudhoyono. Indonesia’s rise to become the world’s top deforesting nation should help to “force the attention of the new administration” to the problem, she says.