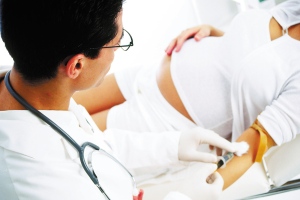 Several tests are now available that can analyse fetal DNA present in a pregnant woman's blood.

Genetic tests that analyse fetal DNA from a pregnant woman's blood are arriving in a rush, giving parents powerful tools for gleaning information about their unborn offspring. Three companies have launched versions of such tests in the past 12 months, and a fourth plans to do so later this year.

But the commercialization of these tests has brought a legal battle that could not only affect corporate profits, but also limit which patients will be able to access the tests and under what terms. The tangle of lawsuits may also offer a taste of future conflicts in the rapidly growing medical-genomics industry.

“If a single company has a monopoly on the market, it will essentially be able to dictate the standard of care and the quality of care,” says Mildred Cho, a bioethicist at the Stanford University School of Medicine in California.

The four firms are all based in California — Sequenom in San Diego, Ariosa Diagnostics in San Jose, and Verinata Health and Natera, both in Redwood City — and use similar techniques to identify fetal DNA in maternal blood samples. The tests can spot genetic abnormalities, such as those that cause Down's syndrome, as early as ten weeks after conception — several weeks sooner than tests already in use. In studies of women at high risk of carrying offspring with Down's syndrome, the tests also produced fewer false positives.

Patents are at the core of the conflict (see 'Blood feuds'). Sequenom licensed the method for detection of cell-free fetal DNA in a mother's bloodstream in 2005, and it now says that other companies are infringing this patent.

A spate of prenatal DNA tests has brought with it a host of legal disputes.

10 August 2010
Sequenom’s lawyers send Verinata Health a letter warning that Verinata is developing tests that will infringe on Sequenom’s patent and patent application.

30 August 2011
Stephen Quake — founder of Verinata — and Hei-Mun Fan, both at Stanford University in California, are issued a patent for ‘Determination of fetal aneuploidies by massively parallel DNA sequencing’.

In January this year, Sequenom filed a lawsuit against Ariosa (formerly Aria Diagnostics) for patent infringement, then requested a preliminary injunction to stop the company from using its test. As a result, Ariosa, Natera and Verinata (together with Stanford University, which was involved in Verinata's patent) have all sued Sequenom, arguing that the slight differences in their testing methods mean that they are not infringing on the patent.

This week, Judge Susan Illston of the US District Court of Northern California will hear arguments in Sequenom's lawsuit against Ariosa. On 29 June, she will conduct pre-trial meetings with lawyers for Natera, Verinata and Sequenom. Decisions in the cases are not expected for many months.

The lawsuits are driven by the promise of a lucrative market that is poised to become a routine part of prenatal care. Observers expect the advantages of the non-invasive tests to expand the pool of women who opt for prenatal genetic screening in the United States each year from fewer than 100,000 to as many as 3 million.

David Ferreiro, an investment banker at Oppenheimer based in New York, has estimated that the non-invasive prenatal-testing market could exceed US$1 billion a year. So far, sales volumes reported by Sequenom — the only publicly traded company of the four — have “substantially exceeded expectations”, says Ferreiro.

And the technology will probably become more powerful. Earlier this month, for example, a team of researchers at the University of Washington in Seattle announced that they had used non-invasive sequencing to read a whole fetal genome (J. O. Kitzman et al. Sci. Transl. Med. 4, 137ra76; 2012). The reading of whole genomes could tell potential parents about a much wider range of genetic variations. Because it covers non-medical traits and genetic variants not certain to cause disease, prenatal sequencing will also raise thorny ethical issues.

Although demand for prenatal testing is likely to increase, cost disparities have already made some of the tests unaffordable for low-income or uninsured women. At present, costs range from $795 (for Ariosa's test) to $2,762 (for Sequenom's, although out-of-pocket costs are capped at $235 for women who have health insurance). In California, Ariosa's test is covered by Medi-Cal — a state programme that pays for prenatal health care for low-income women — but Sequenom's and Verinata's tests are not.

If one company were to have a monopoly on prenatal testing, it could dictate the price of the test, potentially pushing costs out of reach for government programmes such as Medi-Cal, which pays for 40% of the births in California each year, or Medicaid, which covers as many as 60% of the births in some states. Many potential parents would be affected.

“The bigger policy issue is whether society should allow monopolies on medical practice, especially for medical technologies that benefited from public funding,” Cho says.