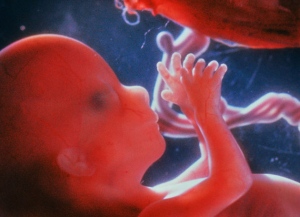 No mystery: parental samples can accurately predict the genome of a fetus.

Heralding a future in which a child’s genetic blueprint can be safely scanned for traits and defects long before birth, researchers have announced that they have reconstructed the genome of a fetus using a blood sample from its mother and a saliva sample from its father. The work is published in Science Translational Medicine1.

The feat is possible because when a woman is pregnant, her blood contains fragments of DNA both from her genome and from that of her unborn child. Generally, around 13% of the DNA in her blood plasma — called ‘cell-free' DNA — comes from the fetus. The first challenge facing those who wish to glean information about the fetus in this way is to figure out how to distinguish fetal from maternal DNA.

Jay Shendure, a geneticist at the University of Washington in Seattle, and his colleagues isolated 5 nanograms of cell-free DNA from a maternal blood sample taken at 18.5 weeks of gestation. They performed 'deep sequencing' on the DNA, which involved sampling fragments roughly 78 times.

The researchers constructed the mother’s genome by sequencing the DNA in her blood cells and then computationally predicted the ratios at which certain blocks of gene variants, or haplotypes should appear as cell-free DNA in her blood. Where the observed ratios diverged from what was predicted, the researchers surmised they were reading some of the genetic material from the fetus.

To work out the paternal contribution, the researchers sequenced the father's genome using DNA from his saliva (blood could also have been used but in this case was not available). Variants of his that didn't turn up in the maternal blood were presumed not to have been inherited by the fetus; those that did were presumed to come from the fetus.

The researchers also developed computational techniques to try to detect de novo mutations in the fetus's genome, which arise spontaneously rather than come from a parent.

To test the accuracy of the deduced genome, the researchers sequenced the child’s genome from cells collected from its cord blood after birth. The researchers were able to predict inherited mutations using the parental samples at most but not all variant sites. Where they were able to make predictions, they report 98% accuracy. They also managed to detect 39 of 44 de novo mutations in the fetus, but with false positives. Mindful that fetal screening needs to be done sooner to give parents time to respond, they then tested the technique on a second family with a 8.2 week-old fetus and obtained 95% accuracy.

At present, most prenatal diagnosis is done from a sample of either placental tissue or amniotic fluid, both of which must be obtained using invasive methods that can trigger miscarriage. Some tests already sample maternal blood, but they target specific chromosomal disorders such as Down’s syndrome. Wide-ranging, non-invasive screening could reach the clinic within a few years, says Shendure. But he warns that more needs to be done to refine the method and make the results meaningful to patients. “The technical piece is not the only challenge,” he says.

James Evans, a clinical geneticist at the University of North Carolina at Chapel Hill, agrees that the idea is not yet ready for the clinic. “We don’t know how to interpret the vast majority of variations we find in the genome,” he says. He also warns that parents have very little time to make life-or-death decisions. “The stakes are high,” he says. “Many are testing to decide about termination.”

“Catching everything in the basket” may also hasten our intolerance for variation, says Françoise Baylis, a bioethicist at Dalhousie University in Halifax, Canada. “As technology moves on, so does our willingness to think of difference as a defect,” she says.

Originally, prenatal testing was conducted only to detect life-threatening disorders. Then, conditions such as Down’s syndrome were added, she says. Recently, British parents were given the go-ahead to test for cancer genes such as BRCA, which aren’t likely to cause disease until later in life. She wonders how long it will be before traits such as albinism are considered defects that need to be screened out.

Dennis Lo, a geneticist at the Chinese University of Hong Kong, who was the first to discover fetal DNA in maternal blood2, argues that a better approach would be to target specific parts of the genome known to be involved in important genetic diseases. Sequencing everything, he says, will create serious ethical dilemmas.

“People always overestimate the certainty that technology can provide,” says Evans. “We’re never going to be able to guarantee a healthy child.”