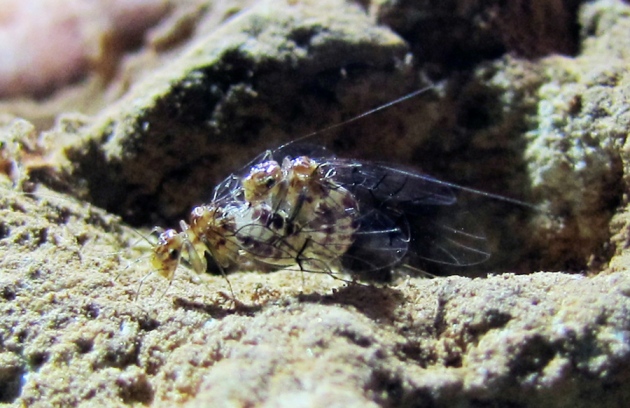 In desolate caves throughout Brazil live insects that copulate for days, the female's penetrating erectile organ sticking fast in a reluctant male's genital chamber until he offers a gift of nutritious semen. Neotrogla seems to be unique among species with reversed sex roles — with choosy males and aggressive, promiscuous females — in also having swapped anatomy, researchers report1.

Not all animal species have a male penis, but because the evolution of body parts usually works through slow modification of existing structures, there would need to be a good reason for a female to develop a penetrating organ, says entomologist Kazunori Yoshizawa of Hokkaido University in Japan, a co-author of the study.

Yoshizawa and his colleagues think that they have found that reason in Neotrogla, which was first described in 20102. The insects were originally spotted in Brazilian caves by ecologist Rodrigo Ferreira from the Federal University of Lavras in Brazil. Entomologist Charles Lienhard at the Geneva Museum of Natural History in Switzerland recognized them as a new genus — and also as possessing unusual genitalia. The team's work describing the reproductive practices of four separate species of Neotrogla is published today in Current Biology1.

When the flea-sized winged insects mate, the female mounts the male and penetrates deep into a thin genital opening in his back. Membranes in her organ swell to lock her in, and multiple spiky spines act as grappling hooks to anchor her tightly to the male. (When researchers tried to pull apart two mating insects, the female was gripping so tightly that the male was accidentally ripped in half, leaving his genitalia still attached to the female.) The tip of the female’s penis fits neatly into the male’s genitalia to allow her to receive a large, teardrop-shaped sperm capsule over their 40–70 hours of copulation.

The key to the anatomy and role reversal might be simple hunger. Neotrogla species live in extremely dry caves, says Ferreira, where there is not much in the way of food, save for bat guano and the occasional dead bat. A female needs enough nourishment to make eggs and reproduce, though, so she likely found another source of nutrition, Yoshizawa says: her mate’s semen capsule. In some other insects, males expend personal resources to create highly sought-after ‘nuptial gifts’ of sperm and nutrients that they bestow upon their mate during copulation. Although it’s not clear whether Neotrogla couples do likewise, the females accept seminal gifts and drain them even when they’re too young to reproduce, Yoshizawa says, so it’s obvious they’re using the sperm capsules for more than mere reproduction.

If Neotrogla males need to spend valuable resources producing their sperm packets, it’s likely they would be choosy about their mates, Yoshizawa says, which would help explain why the females have evolved a penis well designed to hold down reluctant mates long enough to wring out all their gifts. This might be a combination unique to Neotrogla, he says: Although other animals have swapped sex roles where the female is the promiscuous aggressor (the scorpion fly, for example), and others have swapped anatomy where the female penetrates the male (seahorses, for example), none appears to have developed both reversed sex roles and a female penis with grappling hooks.

The authors make a “convincing case” that this female penis is associated with sex-role reversal where males are choosy, as would be expected under sexual-selection theory, says William Eberhard, an evolutionary biologist at the University of Costa Rica in San Pedro.

If Neotrogla can be observed in captivity, they might be good models for studying how and why male and female roles and anatomy can get switched around during copulation, he adds.