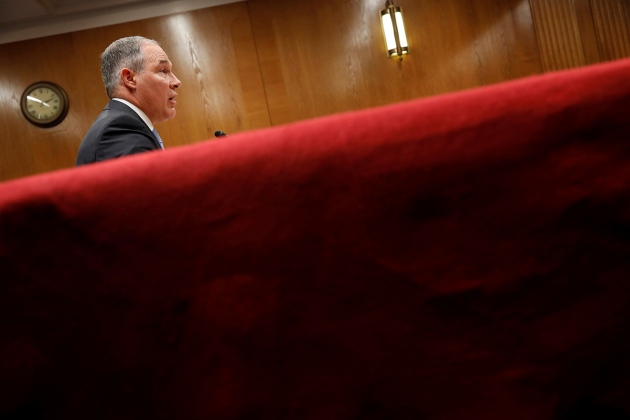 A sweeping US government report on the state of climate-change science is nearing the finish line, but researchers who wrote it aren’t ready to relax just yet. Federal scientists have twice reviewed the roughly 600-page document — which examines everything from shifting weather patterns to rising sea levels — as have the US National Academies of Sciences, Engineering, and Medicine. Just one hurdle remains, but it may be the highest: final sign-off by top officials in President Donald Trump’s administration, many of whom are sceptical of climate science.

Although there have not yet been any signs of trouble, researchers are keeping a close eye on how the White House and federal agencies handle the science report — a technical prelude to the fourth National Climate Assessment, a legally mandated analysis of the causes and impacts of global warming that is due in 2018.

Many climate scientists are particularly uneasy about the potential for interference by the US Environmental Protection Agency (EPA), one of 13 agencies that must approve the science report before its expected release in November. EPA administrator Scott Pruitt, who rejects well-established climate science, has raised the possibility of organizing an adversarial ‘red team–blue team’ review of such research. And he has help from the Heartland Institute, a think tank in Chicago, Illinois, that promotes scepticism about climate change.

“We can’t allow science to be held hostage,” says Donald Wuebbles, a climate scientist at the University of Illinois at Urbana-Champaign and co-chair of the report. “I’m hopeful it won’t get to that, because it would look really bad for the administration to fight this.”

It wouldn’t be the first time that a Republican president had sought to stymie the United States’ national climate-assessment process. The administration of George W. Bush came under fire for ignoring the first National Climate Assessment, which was released by then-President Bill Clinton in 2000. After the Bush administration subsequently missed the legal deadline in 2004 to complete a second assessment, environmentalists sued the government in federal court to compel the report’s release — and won.

“It would look really bad for the administration to fight this.”

“This is going to be the first big test in the climate arena,” says Tammy Dickinson, who led the energy and environment division at the White House Office of Science and Technology Policy (OSTP) under president Barack Obama. One major issue, she adds, is that Trump has yet to fill many positions at the OSTP — which has coordinated work on the last three government climate assessments — or high-level science posts at federal agencies that work on climate change.

At the EPA, rank-and-file staff say that they haven’t been told who will sign off on the science report, or how the OSTP will manage the final review process. Agency scientists told Nature that climate change has become taboo in their discussions with EPA leadership. The fact that agency leaders have consulted with climate sceptics has only added to the confusion.

One EPA official, who asked for anonymity because of career concerns, provided Nature with two lists circulating among Pruitt’s team that seem to have been compiled by the Heartland Institute. One list, labelled “climate scientists”, contains the names of more than 140 people, including many climate sceptics; the second names several dozen climate economists.

The Heartland Institute would not comment on the documents, but a spokesman confirmed that Heartland has provided the EPA with names of people for a climate science ‘red team’. Many agency researchers assume that Pruitt will use the lists to assemble that team, but some fear that it could be used to identify candidates for empty slots on the EPA’s Board of Scientific Counselors, which advises the agency’s research arm. An EPA spokeswoman declined to comment on the lists or the science report.

For the anonymous official, the question now is whether the adversarial approach embodied by the ‘red team’ idea will drive the Trump administration to delay the science report. “They are aware of the report,” the official says. “We don’t know what they are going to do.” Then there is the broader national climate assessment, which will delve into questions that have profound implications for government policy, such as how coastal communities should respond to rising seas. That document is expected to go out to federal agencies this month.

Pruitt will have to be careful how he handles both documents, says Kyla Bennett, a former EPA ecologist who now works for the watchdog group Public Employees for Environmental Responsibility in North Easton, Massachusetts. The EPA could ignore the climate report’s findings while implementing policies that affect the oil, gas and coal industries, which Trump has vowed to protect and promote. But if the administration pushes regulations that ignore mainstream climate science, Bennett says, it is likely to face lawsuits from environmental and science groups.

“The EPA is supposed to be using the best science out there,” she says. “They can’t just suddenly say the Earth is flat, CO2 is not a pollutant and coal is the best thing for the world.”