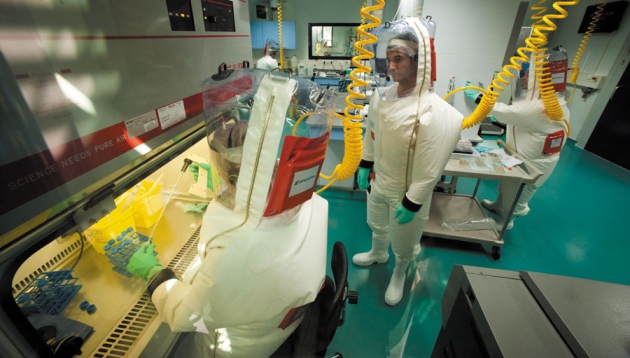 Some researchers argue that work on a new strain of avian flu should be conducted only in labs with the highest biosafety precautions.

It is a nightmare scenario: a human pandemic caused by the accidental release of a man-made form of the lethal avian influenza virus H5N1.

Yet the risk is all too real. Since September, news has been circulating about two groups of scientists who have reportedly created mutant H5N1 variants that can be transmitted between ferrets merely breathing the same air, generally an indicator that the virus could also spread easily among humans.

The work raises the spectre of a disease that spreads as fast as ordinary seasonal flu, but with a fatality rate akin to wild-type H5N1 — an order of magnitude greater than the mortality rate of roughly 2.5% seen during the catastrophic flu pandemic of 1918.

Until now, debate about the new variants has focused on whether the research poses too great a security risk to be published — even if partially redacted — a question currently under consideration by the US National Science Advisory Board for Biosecurity (NSABB).

A number of scientists argue, however, that the NSABB’s deliberations have come far too late. Because further research on the new variants now seems inevitable, a far more important question, they say, is whether the labs that hold samples of the virus — and those who will seek to work with them in the future — have sufficient biosafety protection to make sure it cannot escape.

“This horse is out of the barn,” says Richard Ebright, a molecular biologist and biodefence expert at Rutgers University in Piscataway, New Jersey. “At this point, it is utterly futile to be discussing restricting the publication of this information,” he adds, pointing out that the results have already been seen by many flu scientists, including referees, and are probably spreading through the flu grapevine faster than a speeding neutrino.

Sources say that one of the studies, led by Ron Fouchier of Erasmus Medical Center in Rotterdam, the Netherlands, has been submitted to Science, and that the other, led by Yoshihiro Kawaoka of the University of Wisconsin, Madison, has been sent to Nature. (Nature’s journalists do not have access to submitted manuscripts or the journal’s confidential deliberations on them.) Fouchier also presented his results in September at the annual European Scientific Working Group on Influenza conference in Malta.

The mutant strains were not born out of a reckless desire to push the boundaries of high-risk science, but to gain a better understanding of the potential for avian H5N1 to mutate into a form that can spread easily in humans through coughing or sneezing. Some virologists have suggested that any genetic changes that made it more transmissible would probably blunt its deadliness. The new work seems to contradict that comforting idea. The studies should also help boost surveillance for similar changes in wild-type strains, and to develop diagnostics, drugs and vaccines.

Both experiments were conducted in labs rated at ‘biosafety level 3 (BSL-3) enhanced’ (see ‘ Safety by degrees’). Such labs require scientists to shower and change clothes when leaving the lab, and include other safety features such as negative air pressure and passing exhaust air through high-efficiency particulate air filters. This should be quite sufficient to provide protection against an accidental release of the virus, some virologists say.

“Current biosafety rules are adequate for safely doing such transmission experiments with H5N1 viruses or any other influenza virus,” says Peter Palese, a virologist at Mount Sinai School of Medicine in New York.

Requiring the more stringent protocols of BSL-4 facilities would hamper the research needed to develop countermeasures against an H5N1 pandemic, says Masato Tashiro, a virologist at the National Institute of Infectious Diseases in Tokyo, because it would limit the number of researchers able to work with the virus. As such, he believes that the work should be done in BSL-3 enhanced facilities.

But others say that to protect not only the researchers working on the viruses, but also society at large, the new H5N1 variants must be restricted to BSL-4 labs. These labs have far tougher safety and security measures, such as requiring workers to wear positive air pressure suits and undergo more rigorous decontamination; some also have additional security measures, such as video surveillance and bomb-proofing. Corralling this research in BSL-4 facilities would also immediately limit the proliferation of the viruses in labs, because only a few dozen such facilities exist worldwide, says Ebright. Indeed, one regulatory official, who requested anonymity, says that he is most concerned about the H5N1 mutants being handled in BSL-3 labs in countries with weak biosafety cultures or competences.

Deborah Middleton, an H5N1 researcher at the high-containment facilities at the Australian Animal Health Laboratory in Geelong, says that the characteristics of the new variants “fulfil the criteria of a BSL-4 pathogen”, adding that she believes they would probably be handled as such in her institution. Indeed, the original experiments to create the viruses should also have been conducted in a BSL-4 facility, argues Hervé Raoul, director of the Jean Meriéux-INSERM BSL-4 lab in Lyons, France.

Past experience suggests that the risk of the new variant H5N1 escaping from a lab is far from negligible. Over the past decade, severe acute respiratory syndrome (SARS) has accidentally infected staff at four high-containment labs in mainland China, Taiwan and Singapore, variously rated as BSL-3 and BSL-4. A US National Research Council report released in September detailed 395 biosafety breaches during work with select agents in the United States between 2003 and 2009 — including seven laboratory-acquired infections — that risked accidental release of dangerous pathogens from high-containment labs.

And the rapid spread of an escaped flu virus would make it more dangerous than other deadly pathogens. “When SARS or BSL-4 agents get out, their potential for transmission on a global basis is quite limited,” says Michael Osterholm, who heads the University of Minnesota’s Center for Infectious Disease Research and Policy in Minneapolis, and is a member of the NSABB. “Influenza presents a very difficult challenge because if it ever were to escape, it is one that would quickly go round the world.”

Fouchier declined to comment on these biosafety issues, saying only that his experiments had been reviewed by authorities in the Netherlands and the United States where “H5N1 virus is a class-3 agent because anti­virals and vaccines are available”. Kawaoka did not respond to interview requests.

Some scientists say that they are looking to the World Health Organization (WHO) to provide timely leadership in this biosafety debate. But Gregory Hartl, a spokesman for the WHO in Geneva, Switzerland, says the agency is unable to comment, because it has not yet seen the written studies. Meanwhile, the NSABB has not said when it will publish its advice. In a statement to Nature, the US Department of Agriculture said that it (and the US Department of Health and Human Services) will conduct any appropriate technical review of the new H5N1 variants.

Ebright laments that important questions of biosafety and biosecurity are largely left to the discretion of individual researchers. “In the United States, there is only voluntary oversight for biosafety, and with the exception of the select agents rule, there is no oversight of bio­security,” he says. Given the choice, says Middleton, flu researchers often resist working in higher biocontainment levels simply because they would no longer have the convenience of doing their research in BSL-3 labs at their own institutes, and because working in a BSL-4 lab is inherently more difficult.

The situation contrasts sharply with the barrage of legislation to regulate research that involves placing human subjects at risk, notes Ebright, where proposed projects are rigorously reviewed before they can start. “What’s remarkable,” says Ebright, is that for dual-use research of this type on H5N1, “which puts at risk not one individual but potentially hundreds, thousands or millions of individuals, there is no oversight whatsoever”.