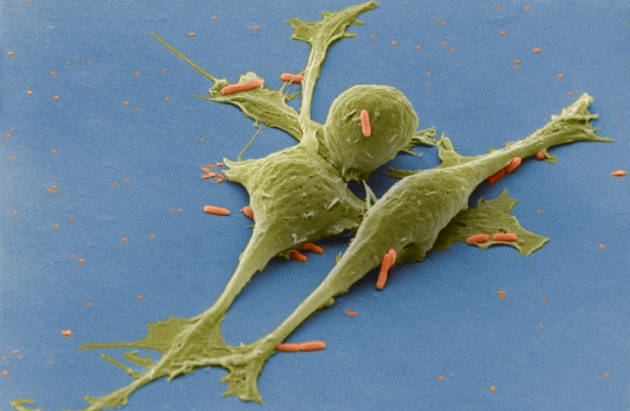 Leiomyosarcoma, an aggressive cancer that affects the uterus, can be spread by morcellation.

The US Food and Drug Administration (FDA) has suggested that surgeons refrain from using tissue-grinding tools to remove uteruses or uterine growths because they increase the risk of spreading undetected cancer. It has also instructed manufacturers to review the labelling of the devices, known as morcellators, and is considering requiring a 'black box' warning, the strongest warning it can mandate.

Every year, about 500,000 women in the United States have surgery to remove their uterus, which often have growths inside them known as fibroids. About a quarter of those women opt for laparoscopic surgery, which is done through incisions just millimetres across. Challenged with removing large masses through tiny holes, surgeons turned to morcellators, powered blades that break up the tissue and make it easier to remove. Inevitably, some fragments escape collection, and these sometimes reattach within the abdomen, says Camran Nezhat, a pioneering surgeon at Stanford University in Palo Alto, California. This is undesirable even when the cells are benign, but devastating in the rare cases in which they are cancerous, he says. “It’s like playing Russian roulette.”

The FDA estimates that one in every 350 women who have surgery to remove fibroids has an unsuspected uterine sarcoma, a type of cancer that can be life-threatening if left untreated. Morcellation may spread cancerous tissue, the FDA warns, and is therefore “discouraged”. Some physicians place the severed body materials into a containment bag while still inside the abdomen and then morcellate inside the bag. The FDA says that surgeons should be aware of this approach, but so far, the agency has not approved any bags for this purpose.

A few doctors have been sounding the alarm over morcellation for some time. In 2011, Jeong-Yeol Park, a gynaecological oncologist at the Asan Medical Center in Seoul, compared the outcomes for 56 women who had a hysterectomy for suspected leiomyosarcoma, a particularly aggressive cancer. The five-year survival rate was 73% in the 31 women who did not receive morcellation, but just 46% in the 25 who did1. In 2012, researchers at Brigham and Women’s Hospital in Boston, Massachusetts, reviewed 1,091 cases of uterine morcellation, and found just two cases of hidden sarcoma — and neither of them were found to have been spread by morcellation2. That risk, about 1 in 500, is lower than the FDA’s estimate of 1 in 350. Despite the findings, the hospital continued to do open morcellation until March, when it mandated the use of containment bags.

Many gynaecological surgeons maintain that the benefits of laparoscopic surgery — speedier recovery, less blood loss, shorter hospital stay and fewer infections — outweigh the risks of morcellation. “Minimally invasive surgery is beneficial to the vast majority of women who are undergoing surgery,” says Jubilee Brown, a gynaecological oncologist at the MD Anderson Cancer Center in Houston, Texas. For those with an undetected leiomyosarcoma, morcellation may only exacerbate an already grim prognosis. “Leiomyosarcoma is a devastating malignancy, morcellation or not,” she says. Brown, a spokersperson for the AAGL, an association based in Cypress, California, that promotes minimally invasive gynaecological surgery, says that the association disagrees with placing restrictions on methods of tissue extraction. The association is now reviewing the scientific evidence to formulate a response to the FDA.

But the risks associated with morcellation are just too high for Paul Sugarbaker, a surgical oncologist at the Medstar Health Research Institute in Washington DC. Among his patients is Amy Reed, an anaesthesiologist at Harvard’s Beth Israel Deaconess Medical Center in Boston, Massachusetts, who, Sugarbaker says, had her cancer spread by a morcellation last October. Reed and her husband, Hooman Noorchashm, a cardiothoracic surgeon at Harvard’s Brigham and Women’s Hospital, where Reed’s surgery took place, are leading a vocal campaign to have the practice banned. That campaign included almost daily e-mails to the FDA, imploring the agency to do something about the practice.