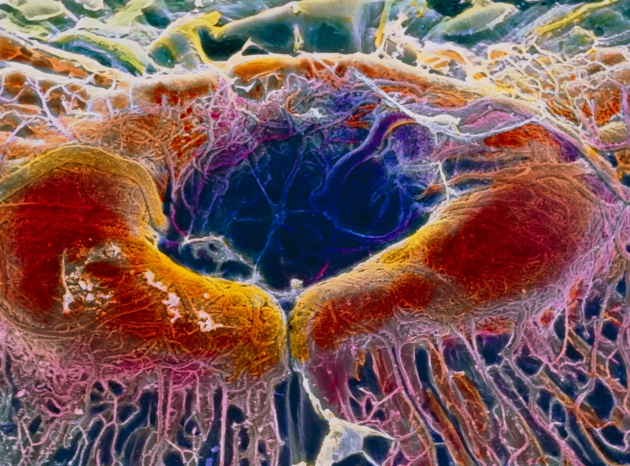 The US government is considering whether to approve a gene therapy to prevent the degradation of cells in the retina (shown here in an image from a scanning electron microscope).

Advisers to the US Food and Drug Administration (FDA) have paved the way for the agency’s first approval of a gene therapy to treat a disease caused by a genetic mutation.

On 12 October, a panel of external experts unanimously voted that the benefits of the therapy, which treats a form of hereditary blindness, outweigh its risks. The FDA is not required to follow the guidance of its advisers, but it often does. A final decision on the treatment, called voretigene neparvovec (Luxturna), is expected by 12 January.

An approval in the lucrative US drug market would be a validation that gene-therapy researchers have awaited for decades. “It’s the first of its kind,” says geneticist Mark Kay of Stanford University in California, of the treatment. “Things are beginning to look more promising for gene therapy.”

Luxturna is made by Spark Therapeutics of Philadelphia, Pennsylvania, and is designed to treat individuals who have two mutated copies of a gene called RPE65. The mutations impair the eye’s ability to respond to light, and ultimately lead to the destruction of photoreceptors in the retina.

In a randomized controlled trial that enrolled 31 people, Spark showed that, on average, patients who received the treatment improved their ability to navigate a special obstacle course1. This improvement was sustained for the full year during which the company gathered data. The control group, however, showed no improvement overall. This was enough to convince the FDA advisory committee that the benefits of the therapy outweigh the risks.

That endorsement is an important vote of confidence for a field that has struggled over the past 20 years. In the early 1990s, gene therapy was red hot, says David Williams, chief scientific officer at Boston Children’s Hospital in Massachusetts. “You couldn’t keep young people out of the field,” he says. “Everyone wanted in.” Then came the death of a young patient enrolled in a gene-therapy clinical trial, and the realization that a gene therapy used to treat children with an immune disorder could cause leukaemia.

Investors backed away from gene therapy, and some academics grew scornful of it. Although European regulators approved one such therapy in 2012, for a condition that causes severe pancreatitis, many doubted that it worked. (The company that makes it has announced that it will not renew its licence to market the drug when it expires on 25 October.) “You’re too smart to work in this field,” a colleague told Kay. “It’s a pseudoscience.”

But some researchers kept plugging away at the problem, improving the vectors that shuttle genes into human cells. Over time, new clinical trials began to show promise, and pharmaceutical companies became more interested in developing treatments for rare genetic diseases. Gradually, investors returned.

Now, demand for gene-therapy vectors is so high that suppliers are oversubscribed, and researchers have to wait between 18 months and 2 years to get some of the reagents that they need for clinical studies, says Williams.

In the past few years, gene therapies have shown promise in clinical trials for a range of diseases — including haemophilia, sickle cell disease and an immune disorder called Wiskott–Aldrich syndrome. On 4 October, Williams and his colleagues published results of a gene-therapy trial to treat cerebral adrenoleukodystrophy (ALD), a devastating and sometimes fatal disorder that affects the nervous system and adrenal glands2. Disease progression was halted for the roughly 2-year duration of the study in 15 of 17 boys who were treated.

The FDA approved its first gene therapy, a treatment in which immune cells are engineered to combat cancer, on 30 August. Unlike Spark’s therapy, the cancer treatment does not target a specific disease-causing mutation, and is administered to immune cells that are removed from the body, engineered and then reinfused.

That is why researchers say that an FDA approval for voretigene neparvovec would be a landmark. “The general concept of gene therapy is replacing or compensating for a missing gene, and that’s what this does,” says Matthew Porteus, a paediatric haematologist also at Stanford. “People are so excited.”

But Spark’s treatment also highlights the limitations of this generation of gene therapies. Although the treatment seems to improve vision, it is still unclear how long the virus will continue to express the normal RPE65 gene — and thus how long its effects will last. “It isn’t a cure,” says Kay.

Similarly, the cerebral ALD therapy seemed to slow the effects of the disease in the brain, but is not expected to treat symptoms in other parts of the body, which can emerge later in life.

“I think we still need to have major improvements in the technology before we’re going to be able to cure these diseases,” says Kay. “But along the way there may be treatments that help make improvements.”