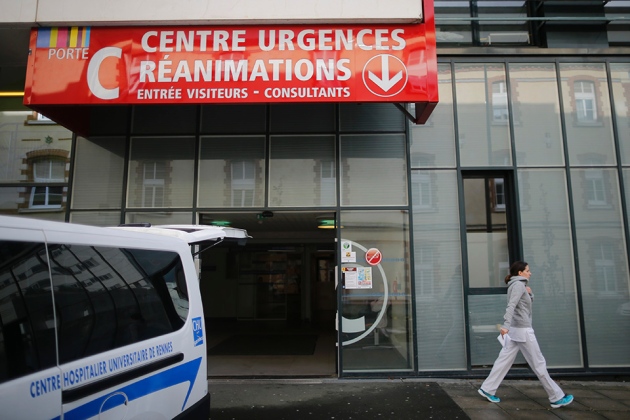 The hospital in Rennes, France, where trial participants were taken in January.

Criticism of the drug company at the centre of a disastrous clinical trial that left one participant dead and four with long-term neurological symptoms has intensified following a revelation that the firm did not use certain data when deciding to administer a higher dose that proved deadly.

On 15 December, during a conference presentation by a scientist from the Portuguese company, Bial, it emerged that the firm did not use certain readings, called pharmacodynamic (PD) data, on how the drug BIA 10-2474 was acting in participants who had received a lower dose, before taking the decision to increase the dosage.

“This was a revelation as far as we are concerned,” says David Webb, president of the British Pharmacological Society (BPS), which hosted the conference in London. The trial, which was carried out in Rennes, France, took a tragic turn in January.

Helena Gama, head of Bial’s pharmacovigilance and drug safety office, spoke for the company at the BPS meeting. When asked why the company had not included the PD data in its dose-escalation decision, she said: “The evaluation before starting a new drug escalation is based on safety evaluation and pharmacokinetic data” — referring to other data on how the drug is absorbed, distributed, metabolized and excreted by the body. “We did not have any profile that precluded the path to the further dosage.”

Bial was not legally required to use PD data, and its trial protocol had been signed off by France’s medical regulator, the National Agency for the Safety of Medicines and Health Products (ANSM).

But experts in pharmacology and clinical-trial design say that the company should have included these readings.  “Without the PD data, they were flying blind. That’s when accidents happen,” says Webb. “I think that was negligent.”

Catherine Hill, a biostatistician who previously served on the ANSM’s scientific advisory board, is also surprised that Bial did not take PD data. “This seems incredible,” she says. “Flying blind is a perfect image.”

It is best practice to use PD data, although not every trial does, notes Munir Pirmohamed, a molecular and clinical pharmacologist at the University of Liverpool, UK.

The Bial trial was the first to test BIA 10-2474 in humans. It was designed to explore whether the drug, which had already been tested in mice, dogs, monkeys and rats, is safe to use in people.

In particular, says Webb, it was important to collect PD data because BIA 10-2474 is relatively unselective, meaning that it could have effects in addition to its intended target in the body.

The drug binds an enzyme called fatty acid amide hydrolase (FAAH) — an activity that might make it effective at treating anxiety and motor disorders associated with Parkinson’s disease, as well as chronic pain in people with conditions such as cancer. PD data can reveal when the copies of the enzyme in the brain are close to being saturated with the drug, a point at which levels of free-floating drug may rise steeply with increasing dose, and potentially lead to unexpected ‘off-target’ effects on other enzymes. Critics at the BPS meeting suspect that because the company was not including PD data in its decision to up the dose, it did not realize that FAAH  was already saturated.

But Bial does not accept this conclusion. “All official reports about the trial were inconclusive and all have considered this event as unpredictable, and that there was no indication whatsoever, including in the pre-trials, that could have predicted this outcome,” said a company spokesperson.

Both French authorities and the European Medicines Agency in London have published updated guidance on first-in-human clinical trials since the tragedy. And a separate report by the ANSM made six recommendations to improve the conduct of future trials.

Gama also released new data on four trial participants who survived but became ill: she said that they had not yet recovered from neurological symptoms including memory loss, headaches, motor disorders and tremors. She also listed ten instances of neurological side effects, including dizziness and blurred vision, in other volunteers who were given lower doses of the drug, although she stressed that these were mild and transient.

The long-term impact on the health of the more severely affected volunteers had not been clear previously, but the fact that they are still experiencing symptoms underlines the conclusion that the fatal reaction to the drug was not a one-off, says Webb. “That’s the first time we know they are not well — that they are still damaged in some way.”

Since the trial, Bial has come under intense pressure from the scientific community to release all data relating to the trial and pre-clinical work. The BPS presentation revealed some such data, but calls for transparency are intensifying.

“Isn’t it time that this whole amount of data is released officially so that we can all have a discussion about it?” asked Adam Cohen, a clinical pharmacologist at Leiden University in the Netherlands, and editor-in-chief of the British Journal of Clinical Pharmacology. In particular, he says, the company should release its ‘investigator’s brochure’, the dossier of pre-clinical work on the drug, plus the full human data from the trial itself.

When quizzed by Cohen and Webb on why the company has still not released the data 11 months after the fatal trial, Gama refused to make a specific commitment to release them. But she added: “We don’t have any issue regarding releasing data to the scientific community.”