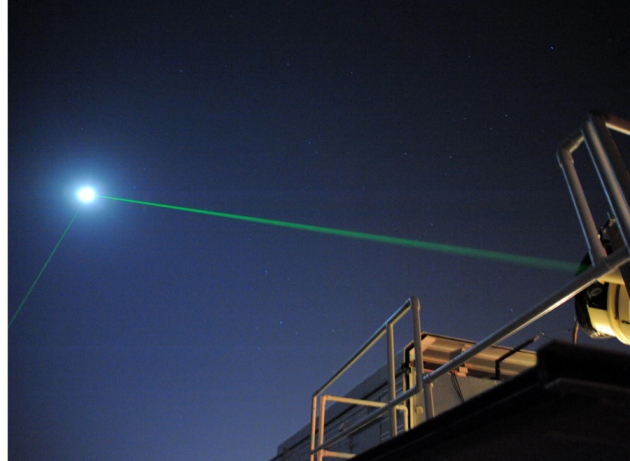 Experiments that bounce laser beams off the Moon — similar to this one at NASA's Goddard Space Flight Center in Greenbelt, Maryland — might detect anomalies in the lunar orbit that would help to explain the nature of dark energy.

The Wall Street mantra “greed is good” could soon be adopted by cosmologists to explain the origins of dark energy, the mysterious entity that is speeding up the expansion of the Universe.

At a cosmology meeting last week in Cambridge, UK, attendants debated a controversial class of theories in which gravity is carried by a hypothetical ‘graviton’ particle that has a small, but still non-vanishing, mass. Such a particle would tend to gobble up vast amounts of energy from the fabric of space, enabling the Universe to expand at an accelerated, although not destructive, pace.

Since astronomers discovered in the late 1990s that the Universe's expansion is accelerating, researchers have struggled to explain not only the nature of the hypothetical entity — dubbed dark energy — that's causing the acceleration but also why the acceleration is so weak.

One of their best guesses is that dark energy is an inherent property of the vacuum of space. Particle physics predicts the existence of such vacuum energy, but also that it should be a whopping 10120 times larger than what is needed to explain the acceleration observed by astronomers. If dark energy were that large, the Universe would have been ripped apart long before stars and galaxies ever formed.

In 2010, Claudia de Rham, a cosmologist at Case Western Reserve University in Cleveland, Ohio, and her colleagues came up with the surprising suggestion that dark energy could be the vacuum energy if most of it were swallowed up by the hypothetical ‘graviton’ particle1, 2. Physicists generally believe that there should be elementary particles, called gravitons, that carry the force of gravity, just as similar particles are known to carry the other three fundamental forces of nature: electromagnetism; the weak nuclear force, which governs radioactivity; and the strong nuclear force, which glues subatomic particles together within nuclei.

The range over which forces act is governed by the mass of their particles. Electromagnetism, for instance, is carried by massless particles of light, or photons, giving it an infinite range, whereas the W and Z particles that carry the weak nuclear force both have mass and their reach is confined to the scale of subatomic interactions.

Most physicists have assumed that the graviton would be massless like the photon, so that the reach of gravity could extend across the Universe. “We know that gravity is long-range because we feel gravity from the Sun — and that sets a bound on how large the graviton could be,” says de Rham. She and her colleagues realized, however, that if the graviton were given a tiny mass of less than 10–33 electronvolts, it could still fit with all astronomical observations. (By comparison, neutrinos, the particles with the smallest-known non-zero mass, have masses of the order of 1 electronvolt, and the electron has a mass of about 511,000 electronvolts.)

A graviton that is massive — as opposed to massless — would earn its heft by swallowing up almost all of the vacuum's energy, leaving behind just a small fraction as dark energy to cause the Universe to accelerate outwards.

When de Rham's team first went public with their graviton model, it immediately created a stir because there are so few good solutions to the dark energy puzzle, says Mark Wyman, a cosmologist at New York University. “Suddenly there was a class of theories that had a real chance of attacking it,” he says. Moreover, massive gravitons would explain the Universe's biggest mystery without the need for adding new and exotic particles or extra dimensions of space, making this a “minimalist solution”, as de Rham describes it.

But the idea was nearly “killed in the crib”, Wyman adds, as physicists began scrutinizing it and found possible problems. One worry has been that the theory may contain hidden 'ghosts' — fields that contain negative energy and cannot exist in reality3 — but others have challenged this concern4. “We use the term ghosts because they are very scary and destroy any theory if they are present,” says de Rham, who remains adamant that her model is ghost-free.

Researchers have proposed a plethora of other ghost-free variations on de Rham’s original theme. In 2011, for instance, cosmologists Sayed Fawad Hassan of Stockholm University and Rachel Rosen of Columbia University in New York proposed combining two types of gravitons, one massive and the other massless, in one model. However, this would require a Universe where space is made of two overlapping fabrics that interact with each other5.

At the Cambridge meeting, several cosmologists including de Rham independently presented a series of models in which interplay between the two fabrics could naturally set space-time accelerating. This would generate the dark-energy effect that astronomers have observed through an alternative mechanism that does not require any vacuum energy.

The key to whether such theories will hold up will be to calculate if they make testable predictions to distinguish massive gravity from standard cosmology, says de Rham. Such experiments could soon be carried out within the Solar System, because massive-gravity models predict a gravitational field between Earth and the Moon that is slightly different to that of ordinary gravity. This would create a detectable difference of one part in 1012 in the precession of the Moon’s orbit around Earth.

Experiments that fire lasers back and forth between Earth and mirrors left on the Moon currently measure the distance between the two bodies and that angle with an accuracy of one part in 1011. “We are just on the edge of being able to test massive gravity,” says de Rham.

Until such experimental evidence is found, however, some remain sceptical of the entire massive-gravity idea. Viatcheslav Mukhanov, a cosmologist at the Ludwig-Maximilians-University in Munich, Germany, says that although he was initially attracted to the theory of massive gravity for its simplicity, bolting on new space-times and adding extra gravitons makes it too contrived. “I think the dark energy problem will require a more elegant solution,” he says.

But elegance is a matter of taste, says Wyman. “If they can settle on a unique compelling model that explains dark energy, I think people will have to take notice,” he says. “What happens in the next few months will decide if the theory has any relevance for the real world, or if it is just a flash in the pan.”