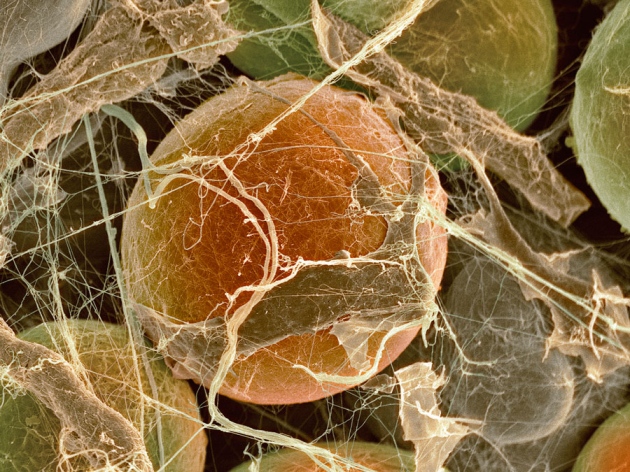 Fat cells (pictured) could be key to how cancers spread throughout the body.

The cells responsible for cancer’s spread — and for most deaths from cancer — may have a fatal weakness according to studies in mice: a reliance on certain fats to fuel their invasion.

It is a difficult and hazardous undertaking for a cancer cell to uproot itself, travel through the bloodstream and take hold in an entirely different part of the body. (Non-cancerous cells are often programmed to self-destruct if they leave the tissue they live in.) Researchers have long struggled to understand which cancer cells can manage the feat, and how they do so.

But a study published on 7 December in Nature1 has identified a population of oral tumour cells that are able to make the journey in mice, and has found that such cells may feast on fats to fuel the trip. Determining how certain cancer cells spread throughout the body — a process called metastasis — is a big step forward, says Xiang Zhang, a cancer researcher at Baylor College of Medicine in Houston, Texas, who was not involved in the study. “Now people have a suspect they can follow.”

To find that suspect, Salvador Aznar Benitah of the Institute for Research in Biomedicine at the Barcelona Institute of Science and Technology in Spain and his colleagues looked among oral-cancer cells for those that could seed tumours. Within that population of cells, the team found some that expressed high levels of a molecule called CD36, which helps cells to take up lipids from their environment.

Such lipids could serve as an energy source for wandering tumour cells, they reasoned. “Metastasis takes a lot of energy,” says Ernst Lengyel, a gynaecological oncologist at the University of Chicago in Illinois, who was not involved in the project. “As a cell you must be able to adapt to changing environments, reprogram protein expression, establish a beachhead and start proliferating as soon as possible.”

Benitah and his team found that high CD36 expression was required for metastasis in mice. Antibodies that blocked CD36 — and eliminated its interaction with fatty acids — completely inhibited metastasis, although they did not affect the development of primary tumours.

The researchers also mined public databases and found that high expression of CD36 correlated with poor medical outcomes in bladder, lung, breast and other cancers in people.

Benitah’s team is now working to develop antibodies against CD36 that could be used in clinical trials, although he estimates it would take at least another four years to reach that milestone. Benitah notes that such a therapy may be effective even after cancer has started to spread: in mice, experimental antibodies eradicated metastatic tumours 15% of the time. The remaining metastatic tumours shrunk by at least 80%.

The team is also looking at the implications of another finding: feeding the mice a high-fat diet led to more and larger tumours in the lymph nodes and lungs — a sign of metastasis — compared with mice on normal diets. Benitah’s team is now carrying out a study that aims to enrol 1,000 people with cancer, profiling lipids in their blood to look for any links to the spread of cancer cells.

But at this stage, it is too early to tell people to avoid fatty foods, cautions Lengyel — especially people with cancer who may need a high-energy diet. “That’s a very dangerous message,” he says.