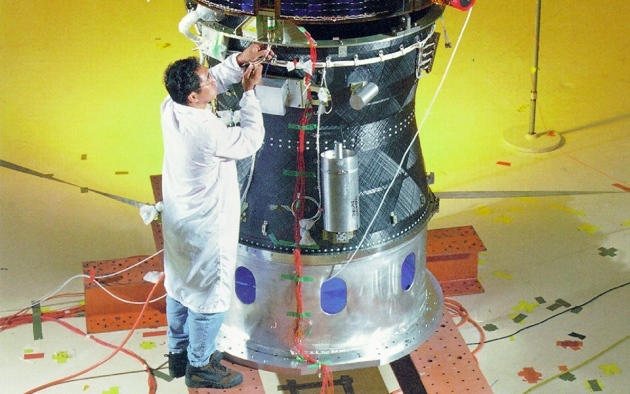 A rocket motor that propelled NASA's Lunar Prospector toward the Moon in 1998 is likely to have fallen into the Indian Ocean in November.

The piece of space junk that made a fiery plunge into the Indian Ocean two months ago was most likely the remains of a rocket motor that propelled a NASA probe to the Moon in 1998, researchers studying the event have concluded.

The junk’s identity is by no means certain, but the “leading candidate” is the translunar injection module of Lunar Prospector, says Paul Chodas, an asteroid tracker at NASA’s Jet Propulsion Laboratory in Pasadena, California. The module nudged the probe out of Earth orbit and then detached from the main spacecraft, which orbited the Moon for 19 months before it was deliberately slammed into the lunar south pole in July 1999.

Speculation about the source of the debris, known as WT1190F, ran rampant even before it plummeted through the atmosphere on 13 November. The only artificial object to make an uncontrolled re-entry at a precisely predicted place and moment, it presented a unique chance to witness such an event in real time. Researchers took advantage of the opportunity, monitoring the debris from a chartered jet as well as from ground-based observatories.

Telescopes had occasionally spotted the object in orbit since 2009, although no one realized until 2015 that the junk would strike Earth. By combining the series of sightings, researchers constructed WT1190F’s elliptical trajectory around Earth and beyond the Moon’s orbit. That path bears the “signature of something launched to the Moon”, Chodas says.

Researchers think that they can eliminate many lunar missions as sources of the debris. Any object travelling on WT1190F’s estimated course for much longer than a decade would probably have hit Earth or swerved into a solar orbit, says independent astronomy-software developer Bill Gray, also part of the re-entry team. So it is unlikely that the debris came from an Apollo mission or one of the other early Moon shots.

Many of the rocket segments used in more recent missions can also be ruled out because they ended up in orbit around the Sun rather than the Earth, says astrophysicist Jonathan McDowell of the Harvard-Smithsonian Center for Astrophysics in Cambridge, Massachusetts, who has done his own analysis of the re-entry object. Other candidates can be ruled out because when observed in orbit, they haven’t matched WT1190F’s furious spin rate of 40 revolutions per minute.

Observations collected by the airborne team on 13 November also point to Lunar Prospector. The spectra of one large fragment of WT1190F include signals of titanium oxide and hydrogen, says astronomer Peter Jenniskens of the SETI Institute in Mountain View, California, who presented the observations on 5 January at a meeting of the American Institute of Aeronautics and Astronautics in San Diego, California. So the object could have been a titanium-walled vessel containing residual fuel, he says, although he declines to speculate about its identity. Lunar Prospector’s translunar injection module had a titanium case, whereas a similar module on another leading candidate, Japan’s Nozomi Mars probe, had a case made from carbon fibre.

Additional support for the Lunar Prospector theory could come from archival searches to uncover sightings of WT1190F that pre-date 2009. If the debris’ orbit can be traced back further in time, researchers can compare the junk’s early travels with the path of Lunar Prospector to see how well they match.

Getting more data would require good luck, but this re-entry has a charmed track record. The airborne observers monitored two chunks of debris down to an altitude of 33 kilometres before the objects disappeared from sight, which implies that they survived intact all the way to the surface.

Orbital-debris specialist Patrick Seitzer of the University of Michigan in Ann Arbor notes that the re-entry site was fortuitous. “We’re lucky that this went into the ocean and not onto the ground, where it could’ve injured someone — or worse.”