The failure of a once-promising vaccine against the sexually transmitted herpes simplex virus has researchers struggling to determine the next step for the field.

The vaccine contained a component called glycoprotein D, which is found in the envelope that surrounds herpes simplex virus 2 (HSV-2). Proteins on the surface of the envelope are important for enabling the virus to attach to and invade host cells. The hope was that the vaccine would stimulate the production of antibodies against glycoprotein D and prevent the virus from establishing an infection.

But in a randomized, double-blind clinical trial involving 8,323 women, the vaccine did not prevent infection by HSV-2 — although it did offer some protection against a closely related virus, HSV-1. The results, published today in The New England Journal of Medicine1, are puzzling given the promising results shown by the vaccine in previous, smaller clinical trials. “It’s very disappointing for the field,” says Lawrence Corey, a virologist at the Fred Hutchinson Cancer Research Center in Seattle, Washington. “We know it failed, but we don’t have a lot of insight as to why.” 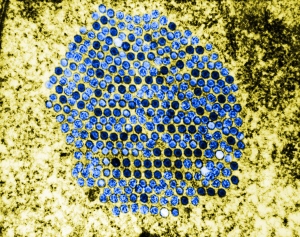 It has proved tricky to develop an effective vaccine against herpes simplex virus 2, shown here in blue infecting a human cell.

Researchers are now ready to mine the latest results for clues to a better vaccine design, says Robert Belshe, a specialist in infectious diseases at St Louis University in Missouri and first author on the vaccine study. “It was a surprise,” he says, “but it really guides us towards a future vaccine.”

About one in six people in the United States aged between 14 and 49 years has genital herpes caused by HSV-2. In addition to causing painful blisters in those infected, the virus can cause death or brain damage in babies born to infected mothers.

It has been notoriously difficult to develop effective vaccines against herpes viruses, many of which have complex life cycles and can lie dormant in the body for long periods of time. The only vaccine that can successfully prevent infection by a member of the herpes virus family is the chickenpox vaccine, which uses a live, weakened virus.

Early tests of the glycoprotein D vaccine suggested that it protected more than 70% of women against HSV-2. The vaccine did not work in men, which Belshe attributes to differences in anatomy. For example, a woman's cervix secretes antibodies, he notes, perhaps explaining why a vaccine would be more effective in women than in men.

But those early tests tested the vaccine in uninfected partners of people infected with HSV-2 (known as discordant couples because only one partner is infected). The larger trial, sponsored by London-based pharmaceutical firm GlaxoSmithKline and the US National Institute of Allergy and Infectious Diseases in Bethesda, Maryland, enrolled uninfected women regardless of the status of their partners. This, says Belshe, may account for the different results. “Why were those couples discordant to begin with?” he asks. “Maybe the uninfected partner has some kind of natural partial resistance.” If so, that partial resistance could have enhanced the effectiveness of the vaccine in the earlier trial, he speculates.

Where does that leave the field? “Enough vaccines have failed that companies are seeing herpes vaccines as a risky business,” says David Knipe, a virologist at Harvard Medical School in Boston, Massachusetts. As a result, Knipe says that the public sector needs to step in to fill the gap.

Some companies do still have a foothold in the field, however. Sanofi Pasteur, the vaccines division of Paris-based drug maker Sanofi, has licensed a vaccine candidate from Knipe’s lab that is based on a live virus that is unable to replicate. And last year, Amgen, a biotechnology firm based in Thousand Oaks, California, purchased a small company called BioVex, of Woburn, Massachusetts, which is testing another vaccine that uses live, weakened HSV-2. Both vaccines are still in the early stages of testing, and will take years to develop.

Meanwhile, Corey advocates going back to the basic biology of genital herpes, such as understanding the role of the immune system in the mucosa lining the genital tract. “We need to understand the immunobiology of HSV acquisition,” he says. “What are the immune responses in the genital tract and how do we develop those immune responses through vaccination?”

Ultimately, what the field needs is a workshop at which researchers can discuss where to go next, says Corey. “There has not been a conscious strategic plan [for HSV vaccines] by any funding agency or pharmaceutical company,” he says. “Meanwhile, HSV continues to spread around the globe.”