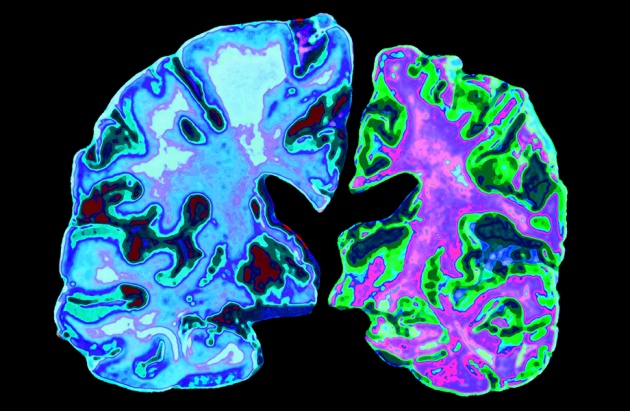 Brain of healthy 70-year-old (left) compared with brain of 70-year-old with Alzheimer's (right).

A drug that was seen as a major test of the leading theory behind Alzheimer’s disease has failed in a large trial of people with mild dementia. Critics of the ‘amyloid hypothesis’, which posits that the disease is triggered by a build-up of amyloid protein in the brain, have seized on the results as evidence of its weakness. But the jury is still out on whether the theory will eventually yield a treatment.

Proponents of the theory note that the particular way in which solanezumab, the drug involved in the trial, works could have led to the failure, rather than a flaw in the hypothesis itself. And many trials are ongoing to test whether solanezumab — or others that target amyloid — could work in people at risk of the disease who have not yet shown symptoms, or even in people with Alzheimer’s, despite the latest negative result.

“I’m extremely disappointed for patients, but this, for me, doesn’t change the way I think about the amyloid hypothesis,” says Reisa Sperling, a neurologist at the Brigham and Women’s Hospital in Boston, Massachusetts. She is leading one of several ongoing ‘prevention’ trials that is testing solanezumab, and other drugs that aim to reduce the build-up of amyloid ‘plaques’, in people at risk of developing Alzheimer’s.

Solanezumab is an antibody that mops up amyloid proteins from the blood and cerebrospinal fluid. The proteins can go on to form plaques in the brain. Eli Lilly, the company that developed solanezumab, announced on 23 November that it would abandon the drug as a treatment for patients with mild dementia. The outcome adds to a long list of promising Alzheimer’s drugs that have flopped in the clinic, many of which, like solanezumab, targeted amyloid.

The Lilly trial, known as EXPEDITION3, involved more than 2,100 people diagnosed with mild dementia due to Alzheimer’s disease. Half received monthly infusions of solanezumab and the other half a placebo. They were followed for 18 months and tested in a range of cognitive tasks. Analysis of people with comparable symptoms in earlier studies of solanezumab had seemed encouraging, but this latest trial indicated only small benefit, not enough to warrant marketing the drug.

“We are disappointed for the millions of people waiting for a potential disease-modifying treatment for Alzheimer’s disease,” said Lilly’s chief executive, John Lechleiter, in a statement. At a press conference, the company said that it had spent around US$3 billion on Alzheimer’s research and development in the past 27 years. 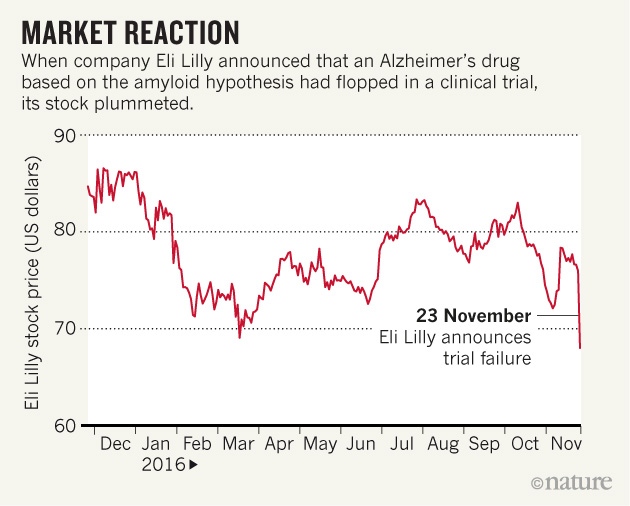 Lilly has also been running prevention trials to see whether solanezumab might help people at especially high risk of the disease. The company says it will now discuss with its trial partners whether to continue with those.

Sperling’s trial is one of these, and tests solanezumab in people who have elevated amyloid levels in the brain but have not shown any symptoms of dementia. “An amyloid therapy has to be started before there’s significant neuronal loss,” she says.

Researchers at Washington University in St Louis, Missouri, are also trialling solanezumab, and another similar antibody made by drug company Roche, in people who are currently healthy but are genetically at high risk of developing Alzheimer’s.

Meanwhile, the Banner Alzheimer’s Institute in Phoenix, Arizona, is testing the effects of three therapies that target amyloid production, one of which is an antibody, in people at high genetic risk of Alzheimer’s. The Lilly outcome “doesn’t disprove the amyloid hypothesis, and it really increases the importance of these longer prevention trials”, says Eric Reiman, the institute’s executive director and leader of the trials. The latest negative finding, he says, “begs the question: Were we too little too late? And we’ll see.”

Lilly’s result may say more about the characteristics of solanezumab than the accuracy of the underlying amyloid hypothesis, says Christian Haass, head of the Munich branch of the German Centre for Neurodegenerative Diseases. The antibody targets soluble forms of amyloid, he points out, so it “could be trapped in the blood without ever reaching the actual target in the brain in sufficient quantities”.

Biogen, a company based in Cambridge, Massachusetts, is testing a different antibody called aducanumab, which targets amyloid plaques in the brain. In early clinical testing, the antibody showed signs of clearing amyloid and alleviating memory loss in people with mild Alzheimer's disease; results from phase III trials are expected in 2020. “Until the aducanumab data read out, we have not truly put amyloid to the test,” says Josh Schimmer, a biotechnology analyst at Piper Jaffray in New York City.

Still, the negative trial findings have emboldened critics of the amyloid theory, who are weary of its failure to yield a treatment. “The amyloid hypothesis is dead,” says George Perry, a neuroscientist at the University of Texas at San Antonio. “It’s a very simplistic hypothesis that was reasonable to propose 25 years ago. It is not a reasonable hypothesis any longer.”

“We’re flogging a dead horse,” adds Peter Davies, an Alzheimer’s researcher at the Feinstein Institute for Medical Research in Manhasset, New York. “There’s no sign of anybody getting better, even for a short period, and that suggests to me that you have the wrong mechanism.”

Regardless of what Lilly decides about its other solanezumab trials, the company isn’t giving up on Alzheimer’s. In partnership with AstraZeneca, it is testing an inhibitor of an enzyme involved in the synthesis of amyloid, and is progressing with a handful of early-stage therapies aimed at other Alzheimer’s targets.