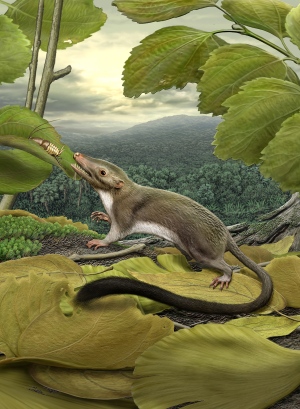 The hypothetical ancestor of all placental mammals was small, furry and ate insects.

After an asteroid killed off the dinosaurs — save for those that evolved into today's birds — a small, furry animal scurried through the forest in search of insects. Its unassuming looks gave little hint that its descendants would one day rule the planet.

A team of scientists in the United States and Canada has now reconstructed the appearance and anatomy of this creature — the forebear of all 'placental' mammals, which give birth to live young at an advanced stage of development — in unprecedented detail, using a record-breaking data set of anatomical traits and genetic sequences.

The critter turned out to be a tree-climbing, furry-tailed insect eater that weighed between 6 and 245 grams. It gave birth to blind, hairless young, one at a time. Its brain was highly folded, and it had three pairs of molars on each jaw.

“It’s like bringing a fuzzy photo into focus,” says lead author Maureen O’Leary, a palaeontologist at the State University of New York at Stony Brook. “The fact that it’s a small scrambling animal isn’t a surprise,” she adds, but the reconstruction is more detailed than anything else ever attempted, and provides a picture that future fossils can be checked against.

“You could almost count the number of hairs it had on its head,” says Olaf Bininda-Emonds, an evolutionary biologist at Oldenburg University in Germany who was not part of the study.

The analysis, which is published in Science1, confirms that the placentals diversified a few hundred thousand years after the (non-avian) dinosaurs went extinct, so groups such as rodents and primates never shared the planet with the prehistoric reptiles. This conclusion is backed up by the fact that no one has ever found fossils of placental mammals from before the extinction of the dinosaurs 65 million years ago — but it contradicts genetic studies that put the group’s origin at around 100 million years ago.

The researchers analysed more than 4,500 anatomical traits — almost ten times as many as any previous study. These included traits from 86 living and extinct mammals.

“The data matrix that they've assembled is jaw-dropping,” says Bininda-Emonds. “It undoubtedly provides one of the best estimates of evolutionary relationships within placental mammals to date.”

The team took two years just to identify the characteristics that they wanted to analyse, and a further three to collect all the data — an exercise complicated because the researchers weren't always speaking the same scientific language. “The terminology used for certain anatomical traits varies from group to group,” says study co-author Nancy Simmons, curator in charge of the department of mammalology at the American Museum of Natural History in New York. “I, working on bats, might call a structure something, and someone working on whales might call it something else.”

The researchers bolstered their anatomical results with DNA, or molecular data, from the living species. They uploaded all their data, definitions and supporting pictures to Morphobank, an online software package for building species' family trees that members of the group had helped to develop in the course of the project.

The resulting tree for placental mammals could help to resolve some long-standing debates. For example, it suggests that the treeshrews and flying lemurs are equally closely related to primates, which include humans. Genetic studies had suggested that flying lemurs were most closely related. The placental tree also shows that the Afrotheria, the group of African mammals that includes elephants and aardvarks, evolved from ancestors in North and South America that are now extinct.

This creature must have been around after the supercontinent of Gondwana split into today’s southern land masses, so its descendants must have swum or otherwise travelled over long distances to explain the wide distribution of placentals today.

“What fascinates me most is the tremendous incongruence between the morphological and molecular data,” says Mark Springer, an evolutionary biologist at the University of California, Riverside. For example, grouping animals according to their anatomy alone puts physically similar species such as pangolins, anteaters and aardvarks in the same tight group, whereas molecular data shows that they belong to different orders. This is why O'Leary and her team relied on both types of information, but Springer says that the lack of genetic data for extinct species adds uncertainty to their position on the tree, and to the tree's overall shape.

Bininda-Emonds adds that the team estimated the timing of the placental evolutionary explosion using just fossil information, whereas other groups have relied on molecular data alone. Comparing the two estimates is like comparing “apples and oranges”, he says. “They haven’t really done anything to resolve this ongoing dispute.”