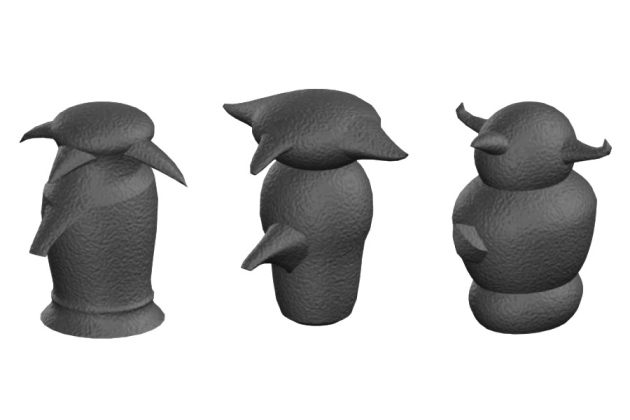 The myriad variations in the shapes known as greebles are probably recognized by a distinct cognitive mechanism from the one that identifies faces.

People who are unable to recognize faces can still learn to distinguish between other types of very similar objects, researchers report. The finding provides fresh support for the idea that the brain mechanisms that process face images are specialized for that task. It also offers evidence against an 'expertise' hypothesis, in which the same mechanisms are responsible for recognition of faces and other highly similar objects we have learned to tell apart — the way bird watchers can recognize birds after years of training.

Constantin Rezlescu, a psychologist at Harvard University in Cambridge, Massachusetts, and his colleagues worked with two volunteers nicknamed Florence and Herschel, who had acquired prosopagnosia, or face blindness, following brain damage. The condition renders people unable to recognize and distinguish between faces — in some cases, even those of their own family members.

The team trained Florence and Herschel to recognize greebles, computer-generated objects that differ from one another in similar ways to faces. The two volunteers spent eight training sessions of up to one hour learning to recognize 20 different greebles. The objects belonged to five different ‘families’ that were easier to distinguish between than were the individual greebles, and initially the participants took longer to discriminate individual greebles within the same family than they did the different families. But by the end of the training, they could tell individual greebles apart just as quickly — a sign that they had become experts in recognizing them, just as dog trainers can recognize individual dogs as easily as different breeds of dog.

The training also enabled Florence and Herschel to identify individual greebles with the same ease as volunteers without face blindness who underwent the same training. But a similar training programme that involved images of different faces did not improve their ability to recognize faces. The study appears in Proceedings of the National Academy of Sciences1.

The work “puts the final nail in the coffin of the expertise hypothesis”, says Elinor McKone, a psychologist at the Australian National University in Canberra. “The paper refutes a core prediction of the expertise hypothesis: that a brain injury which severely damages face recognition should make it impossible for someone to become very good at telling apart individual members of any other category.”

But Isabel Gauthier, a psychologist at Vanderbilt University in Nashville, Tennessee, who with her collaborators developed the greeble test and is a leading proponent of the expertise hypothesis, is not convinced. The greebles used in the study differed in terms of certain features, such as ‘ears’ that pointed up or down, that made them easier to discriminate between than the faces, says Gauthier.

This, she says, could explain how even the face-blind people eventually learned to recognize the greebles, but does not necessarily mean that people without the condition use the same strategy. Rather, non-face-blind persons can probably use their still-intact ability to integrate many parts of an object not only to recognize faces, but also to recognize greebles.

Repeating the study with objects that lack conspicuous qualitative differences could help to settle the debate, says Irving Biederman, a cognitive neuroscientist at the University of Southern California in Los Angeles.

To search for more evidence that people with face blindness can still become adept at recognizing other object classes outside a laboratory setting, Rezlescu plans to search for bird watchers, dog trainers and people with other such skills in a database of about 9,000 people who say they have had prosopagnosia from birth.