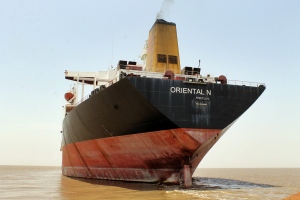 The Exxon Valdez was sentenced to death last month when an Indian court granted her entry to a ship-breaking yard.

In 1986, the National Steel and Shipbuilding company yard in San Diego, California, launched two ships with very different destinies. The USNS Mercy, a converted oil tanker, set off in white livery emblazoned with red crosses: a floating hospital for use in humanitarian aid efforts around the world. The Exxon Valdez, by contrast, was never intended to do more than cart crude oil from Valdez, Alaska, to Long Beach in California.

But on 23 March 1989, she entered history after her captain, Joseph Hazelwood, eased her out of the shipping lane. Icebergs made navigation especially dangerous that night for the ship, which was as long as three football fields and laden with 210,000 cubic metres of crude. Yet Hazelwood went below, just for 10 minutes to do some paperwork, he said, though perhaps also woozy from the vodkas he had drunk before coming on board (he was later acquitted of operating a vessel while intoxicated) — leaving an unlicensed third mate in charge.

At four minutes past midnight on 24 March, a cold-water reef ripped the thin skin of the Exxon Valdez's single hull, releasing the equivalent of about 17 Olympic swimming pools of oil into Prince William Sound, Alaska. It was the worst ever oil spill in US waters until 2010, when the Deepwater Horizon spill leaked one Exxon Valdez into the Gulf of Mexico every five days for three months.

Some scientists predicted that the oil would degrade quickly, but 20 years later, 87 cubic metres of the stuff was found to be sequestered beneath stony beaches, where it continues to kill otters that dig up clams.

Oddly, the net impact of the catastrophe may have been positive. In 1990, the United States passed the Oil Pollution Act (OPA): a powerful piece of legislation that required oil tankers in US waters to have double hulls. It also boosted the government's ability to respond to spills; provided up to US$1 billion to deal with individual accidents; increased penalties for oil companies responsible for spills; and required businesses to draw up exhaustive plans for handling spills.

The Valdez convalesced in San Diego while her sister, the USNS Mercy, tended to wounded soldiers in the Persian Gulf. 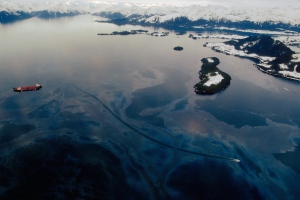 The 1989 Exxon Valdez disaster was the worst ever oil spill in US waters until the Deepwater Horizon spill in 2010.

But she was stalked by bad publicity. In 1995, the ship featured as a rusty tanker in Kevin Costner's film Waterworld, captained by a deranged pirate bent on locating the last bit of land on a world where climate change has melted the ice caps. The captain drinks a toast to "Saint Joe" — Captain Hazelwood — whose portrait is nailed to his cabin wall.

In 2002, the European Union outlawed single-hulled oil tankers, and the erstwhile Valdez, now called simply the Mediterranean, was sent to Asian waters. En route, her bow wave may have lapped against the USNS Mercy, which was heading to southeast Asia to help the victims of the 2004 Indian Ocean tsunami.

In 2007, the Valdez endured her most brutal makeover yet. She was converted into an ore carrier and renamed the Dong Fang Ocean, sailing under a Panamanian flag.

Her luck had not changed. In 2010, she celebrated the 21st anniversary of the Exxon Valdez disaster by smashing into the cargo ship Aali in the Yellow Sea, amputating her own anchors and piercing the Aali's ballast tanks.

And in 2011, by now known as the Oriental Nicety, she was sold for $16 million to an Indian demolition company, Priya Blue Industries. The same company had attracted bad press in 2006 for breaking down a ship called the Blue Lady, despite knowing that she contained asbestos. Activists claimed that the Oriental Nicety, too, was contaminated with asbestos and polychlorinated biphenyls, a persistent organic pollutant. The Indian Supreme Court forbade docking of the ship and imposed an environmental audit.

So the Oriental Nicety sat on death row for two months, costing her owner $10 million as the value of its steel declined and the company continued to pay its crew.

Last month, the court ruled in favour of Priya Blue: there was no toxic waste on the ship. The Oriental Nicety is welcome to beach at Alang, the world's largest ship-breaking yard, where she will be dismantled for scrap. But as with so many things in the story of the Exxon Valdez, the end will be drawn out. It will take 500 workers four months to dismember her carcass.