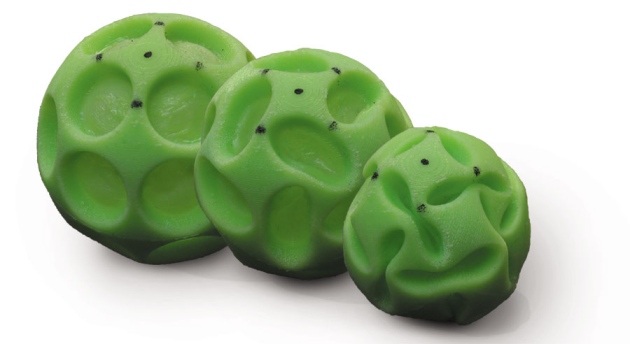 Katia Bertoldi is talking fast. She has only 12 minutes to present her work in the burgeoning field of 'extreme mechanics'. But first, the Harvard University engineer smiles at the physicists gathered in Boston at the March 2012 meeting of the American Physical Society. She has to show them what she found in a toy shop.

Projected onto the screen, the Hoberman Twist-O looks like a hollow football made of garishly coloured plastic links. Twist it just so, however, and hinges between the links allow it to collapse into a ball a fraction of its original size. Twist it the other way, and it springs back open. Bertoldi explains that the Twist-O inspired her group to create a spherical device that collapses and re-expands, not with hinges but through mechanical instabilities: carefully designed weak spots that behave in a predictable way. Applications might include lightweight, self-assembling portable shelters or nanometre-scale drug-delivery capsules that would expand and release their cargo only after they had passed through the bloodstream and reached their target.

The challenge, Bertoldi says, is to figure out the exact instabilities a structure needs to achieve its desired behaviour. She quickly describes the necessary geometry and runs down a list of constraints. There are just 25 shapes that satisfy all the requirements, she explains, glossing over the months of computation it took to solve the problem. Then she starts a video to show the assembled throng the design that her team has come up with.

An image of a rubbery chartreuse ball with 24 carefully spaced round dimples (pictured) materializes on the screen. The test begins and the ball slowly collapses, each dimple squeezing shut as the structure twists into a smaller version of itself. There is a moment of silence, then everyone in the room begins to clap.

Student engineers have always been taught that mechanical instabilities are a problem to avoid. Such instabilities can quickly lead to structural failures — the collapse of a weight-bearing pillar, the crumpling of a flat steel plate or the buckling of a metal shell. From failures come disasters, such as the Second World War Liberty Ships that broke up while at sea. And the devilishly complex mathematical analysis of buckling structures ground to a halt in the late nineteenth century, because it was unworkable with the methods then available.

Carefully designed areas of instability (the dimples) allow this buckliball to smoothly collapse in on itself.

During the past half-decade or so, however, a new generation of physicists and engineers has begun to embrace instability. These researchers have been inspired, in part, by advances in geometry and nonlinear mathematics that have allowed them to progress where their forebears could not. They have already, for example, devised a theory for why cabbage leaves and torn plastic rubbish bags ripple1; calculated the patterns of wrinkles in fabric and crumples in paper2; and accounted for the way coils and loops develop in the guts of vertebrate embryos3.

On the practical side, one source of inspiration has been the widespread availability of flexible polymers and silicone materials, as epitomized by the vast selection of soft yet tough covers for smart phones. Such materials make it possible to imagine electronics, robots, tools and vehicles whose structures can radically deform yet still recover their original shapes.

The resulting extreme-mechanics movement has grown rapidly. The first three conference sessions to bear the name, totalling fewer than 40 presentations, were held during the March 2010 meeting of the American Physical Society (APS). Just two years later, Bertoldi's talk on collapsible spheres was one of 111 presentations on extreme mechanics spread across 8 sessions. Hundreds of researchers are now active in the field worldwide. In spring 2011, the US National Science Foundation announced an opportunity for substantial funding in the field: it would allot up to US$2 million over four years to projects in Origami Design for Integration of Self-assembling Systems for Engineering Innovation (ODISSEI). The foundation expects to announce the awards this month.

“It was as if they wrote the solicitation just for us,” says Christian Santangelo, a physicist at the University of Massachusetts Amherst and a co-principal investigator on an ODISSEI proposal. Along with two origami artists and an expert in origami mathematics, Santangelo and his colleague Ryan Hayward, a chemical engineer at Amherst who specializes in polymers, are proposing a new kind of three-dimensional (3D) printer. Instead of slowly building an object with layers and layers of polymer, as current 3D printers do, they would print a flat polymer sheet with a two-dimensional (2D) origami-like pattern, then force it to fold into a close approximation of the desired 3D object.

One part of the project will involve refining a computer program developed by one of the origami artists, physicist Robert Lang of Alamo, California. Given a desired shape, the program will generate a diagram of the required fold pattern. At present, the program states only whether a particular fold on a sheet should be convex (in origami terms, a mountain fold) or concave (a valley fold). The user still has to devise a sequence of manipulations that can achieve those folds and create the figure. But the kinds of folding required by the project could quickly reach such levels of complexity that a human solution would be impossible. What the researchers foresee instead is a completely automated process in which a 2D sheet is inscribed with a computer-generated pattern of instabilities, and then folds correctly in one smooth, coordinated motion.

Unfortunately, in Hayward's experiments so far, the folds just buckle into mountains or valleys at random. A potential solution may lie in the wavy-leaf-edge phenomenon, says Santangelo. If cells along the edge of a growing plant leaf multiply faster than those in the interior, he explains, they run out of room to lie smoothly in a plane, and the leaf edge is forced to ripple to accommodate them. If he and Hayward can work out how to make the polymer sheet swell in a way that varies from point to point, they could produce a complex pattern of rippling and curling that would help to control the sheet's folding.

Just as natural phenomena can inform extreme mechanics, the discipline's researchers can also use their knowledge to explain peculiarities in natural structures. “This field is filled with small secrets,” says Pedro Reis, an engineer at the Massachusetts Institute of Technology in Cambridge and one of the leaders of the movement.

Take the mechanisms at work in a grain of pollen, for example. Reis pulls out a small torpedo-like shape made of a light green, rubbery material. He stretches it, then crushes it in his fist. A pollen grain undergoes torture, he says: it gets wet, swells, dries out and is crushed, so plants have evolved strategies such as built-in soft spots to help their pollen to avoid damage. Reis pokes a dimple in the torpedo. Scientists can learn from this that a shell with a soft spot is more resistant to failure than one that is completely rigid, he says. “We are trying to learn from nature. How it evolved to deal with these problems for which we have no intuition is very inspiring.”

“How nature evolved to deal with problems for which we have no intuition is very inspiring.”

Reis sets the torpedo aside and, twisting an imaginary string between his fingers, moves on to the subject of the sea-floor cables that carry Internet traffic around the globe. Mechanical instabilities can cause complex behaviour in these structures, too, he says. Lay too much cable, and it will curl and kink, resulting in poor signal quality. Lay too little, and the line will be tense and vulnerable to snapping. When a ship dragging its anchor sliced through one such cable in February, six countries in East Africa lost Internet connectivity. Although a better understanding of long, thin objects' instabilities wouldn't have prevented the accident, Reis says, it might have made for a cable more resilient to breakage. An improved theory of cables could also be of great use to fields ranging from the oil industry to the mechanics of DNA.

In an effort to turn such insights into engineered structures, Reis's lab is competing for one of the ODISSEI grants in partnership with Bertoldi and several others. One of their goals is to compile a lexicon of shapes: polyhedra that will buckle, bend, stretch, collapse and expand in predictable ways in response to specific stimuli. The shapes are based on spherical shells with holes cut in them. But surrounding the holes are ligaments designed to contain weak spots that buckle when stressed. In principle, these buckling polyhedra could be made in a range of sizes, whether it's a nanometre-scale sphere designed for drug delivery or a retractable roof for an athletics stadium. The team calls the resulting structures 'buckliballs' — the subject of Bertoldi's presentation at this year's APS meeting.

Buckliballs, with their geometric design and near-magical behaviour, encapsulate the cleverness and beauty for which extreme-mechanics researchers yearn. Looking ahead, the more theoretically minded foresee a new set of general rules that could describe the behaviour of any flexible solid as it crumples. Meanwhile, those with an engineering bent imagine robots with appendages that can transform into tools or squeeze, octopus-like, through tiny spaces; backpacks that expand into tents; and mobile phones that users can roll up and stick behind their ears like a pencil. They see a whole realm of devices that transmute failure into function. That could all be years in the making — but Bertoldi and her rapt audience already see far more in this field than engineers' toys.