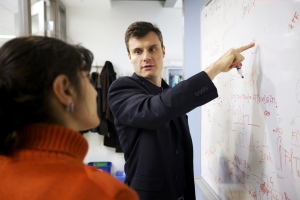 Researchers who, like Vadim Backman, top $1.5 million in NIH grants will face an extra layer of review.

Vadim Backman no longer relies on coffee to get him through the 100-hour weeks he puts in at his biomedical engineering laboratory at Northwestern University in Evanston, Illinois. Since giving up caffeine, he drops to the floor and does press-ups whenever he needs to clear his head. It certainly takes an alert mind to supervise 20 students, collaborate on clinical trials at 8 hospitals worldwide, and manage 7 grants worth a total of more than US$3 million from the US National Institutes of Health (NIH) in Bethesda, Maryland.

At 38, Backman is already a biomedical superstar. He is developing an imaging technology that could detect abnormal structures in cells during the earliest stages of cancer. And a Nature analysis has identified him as one of seven scientists whom the NIH supports with the most grants (see ‘Seven lucky seven’). That puts him near the top of a larger group of NIH-supported researchers who will soon be targeted for extra scrutiny beyond the peer-review process.

As it released its 2013 budget proposal last week, the agency said that researchers who control more than $1.5 million in grants will undergo an extra layer of review from external advisers before further grants are approved. The decision comes as the agency tries to scrape money together for new grants in order to raise its current grant success rate of 18%, a historic low. But the countermeasure — potentially penalizing applicants on the basis of their previous success — is also historic.

The basic rule for giving out grants at the NIH has always been simple: to fund the best science. A retreat from pure meritocracy is “shocking”, says Howard Garrison, director of public affairs at the Federation of American Societies for Experimental Biology in Bethesda, Maryland. “It’s a huge sea change.”

Nevertheless, Garrison supports the new rule because he is concerned about the vast number of researchers who are struggling to win, or hold, just one grant.

Nearly 1,500 principal investigators (PIs) — about 5% of those who held grants in 2011 — come in above the $1.5-million threshold and would be subject to the review. A $750,000 threshold for a similar layer of extra review has been in place since the 1990s at one NIH institute, the National Institute of General Medical Sciences, and has worked well, says the institute’s former director Jeremy Berg, now at the University of Pittsburgh in Pennsylvania.

Sally Rockey, the NIH deputy director for extramural research, says the agency isn’t considering a hard cap based on the number of grants per scientist, nor extra review for those with many grants. She points out that a cap based on numbers of grants would have to be draconian to spread grants to a significantly greater number of researchers. An analysis she presented on her blog in October 2011 found that setting a maximum of two grants per PI would increase the grant success rate by just 2%.

In 2008, two NIH advisory panels tasked with reforming the peer-review process for grants recommended that PIs spend at least 20% of their time on any given grant — a de facto cap of five grants per researcher. Although most of the recommendations were ultimately adopted, the 20% rule was not. Berg, who was on one of the advisory panels, says he would still support a review threshold — although not a hard cap — for a certain number of grants. “You look at people with more than a certain number of grants and ask, ‘Is this a good investment for the NIH?’”he says. There are concerns, he adds, that PIs could gain multiple grants by presenting similar experiments to different NIH institutes.

“You look at people with more than a certain number of grants and ask, ‘Is this a good investment?’”

Berg has tried to measure the output of laboratories of different sizes, and found that the richest are not necessarily the most productive (see Nature 468, 356–357; 2010). “There are some people who are definitely capable of running bigger operations while maintaining tremendous productivity per dollar,” he says. “There are other people who are very well funded and aren’t so productive.”

Those questions are especially important for the very top grant winners, whom Nature identified on the basis of ‘research project grants’, an NIH-defined category composed mostly of the R-01 grants that provide bread-and-butter support to most PIs.

John Tainer, a structural biologist at the Scripps Research Institute in La Jolla, California, feels that the new rule will only further entrench a bias against those with multiple grants, and worries that it could restrict innovation by the elite. With 7 grants worth a combined sum of more than $5 million, it is hard to feel sorry for Tainer. But earlier this month, he lost a competitive renewal for a grant that he has held since 1985, to study the hair-like pili on the surface of bacteria that make them sticky and contribute to their pathogenicity. Because he relies on grants to pay the salaries of 18 lab members, as well as his own, this rejection could mean lay-offs.

Tainer suspects that the decision “reflects the fact that I have other projects”. But, he continues, “The science hasn’t changed. What we’re doing now is better than what we’ve ever done.”

The loss of the grant will extend beyond his own lab, he adds. “For the next decade, people will be publishing parts of things that I had done better. The cost to the NIH will be higher. If you’re a leader and you have momentum and technology, the impact of taking that away and having other people do it at a different level is destructive.”

Backman also dislikes the idea of capping the number of grants that an individual can win, but is more relaxed about the proposed $1.5-million threshold review. He is sympathetic to the plight of young researchers casting about for their first grant — he was in the same position just a few years ago — but says that the competition for established researchers must be based purely on the strength of their ideas. “I like the idea of meritocracy,” he says.

Fiscal 2011 grant data were used. Grant totals reflect fractional shares of multi-PI grants. Analysis excludes grants made to large research centres. Grant supplements are included as part of original grant, rather than as a separate award.