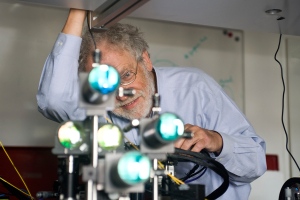 Quantum theory was first devised more than a hundred years ago, but even experts still have little idea what it means, according to a poll reported in a recent, and unusually entertaining, preprint on the physics arXiv server1.

The tongue-in-cheek poll of 33 key thinkers on the fundamentals of quantum theory shows that opinions on some of the most profound questions in the field are fairly evenly split over several quite different answers.

For example, votes were roughly evenly split between those who believe that, in some cases, “physical objects have their properties well defined prior to and independent of measurement” and those who believe that they never do. And despite the famous idea that observation of quantum systems plays a key role in determining their behaviour, 21% felt that “the observer should play no fundamental role whatsoever”.

Nonetheless, “I was actually surprised that there was so much agreement on some questions,” says physicist Anton Zeilinger of the University of Vienna, who organized the meeting in Austria in July 2011 at which the poll was taken.

The meeting, supported by the Templeton Foundation based in West Conshohocken, Pennsylvania, brought together physicists, mathematicians and philosophers interested in the meanings of quantum theory. Zeilinger, together with Maximilian Schlosshauer, now at the University of Portland, Oregon, and Johannes Kofler at the Max-Planck-Institute of Quantum Optics in Garching, Germany, devised the poll, in which attendees were given 16 multiple-choice questions on key foundational issues in quantum theory.

Disagreements over the theory’s interpretation have existed ever since it was first developed, but Zeilinger and his colleagues believe that their poll might be the first to interrogate the full range of views held by experts. A previous poll at a 1997 quantum mechanics workshop in Baltimore asked attendees the single question of which interpretation of quantum theory they favoured most2.

Probably the most famous dispute about what quantum theory means was that between Albert Einstein and his peers, especially the Danish physicist Niels Bohr, on the question of whether the world was fundamentally probabilistic rather than deterministic, as quantum theory seemed to imply. One of the few issues in the new poll on which there was something like a consensus was that Einstein was wrong.

Bohr, along with Werner Heisenberg, offered the first comprehensive interpretation of quantum theory in the 1920s: the so-called Copenhagen interpretation. This proposed that the physical world is unknowable and in some sense indeterminate, and the only meaningful reality is what we can access experimentally. As at the earlier Baltimore meeting, the Austrian poll found the Copenhagen interpretation to be favoured over others, but even so it was only held by 42% of the voters. However, 42% also admitted that they had switched interpretation at least once. And whereas a few decades ago the options were very few, says Schlosshauer, “today there are more ‘sub-views’.”

Perhaps the most striking implication of the poll is that, while quantum theory is one of the most successful and quantitatively accurate theories in science, interpreting it is as fraught now as it was at the outset. “Nothing has really changed, even though we have seen some pretty radical new developments happening in quantum physics, from quantum information theory to experiments that demonstrate quantum phenomena for ever-larger objects”, says Schlosshauer. “Some thought such developments would push people one way or the other in their interpretations, but I don't think there’s much evidence of that happening.”

However, he says there was pretty good agreement on some questions. “More than two-thirds believed that there is no fundamental limit to quantum theory — that it should be possible for objects, no matter how big, to be prepared in quantum superpositions like Schrödinger’s cat. So the era where quantum theory was associated only with the atomic realm appears finally over.”

Other notable views were that 42% thought that it would take 10–25 years to develop a useful quantum computer, whereas 30% placed the estimate at 25–50 years. And the much debated role of measurement in quantum theory — how and why measurements affect outcomes — split the votes many ways, with 24% regarding it as a severe difficulty and 27% as a “pseudoproblem”.

Zeilinger and colleagues do not claim that their poll is rigorous or necessarily representative of all quantum researchers. John Preskill, a specialist in quantum information theory at the California Institute of Technology in Pasadena, suspects that “a broader poll of physicists might have given rather different results”.

Are such polls useful? “I don’t know”, says Preskill, “but they’re fun.” “Perhaps the fact that quantum theory does its job so well and yet stubbornly refuses to answer our deeper questions contains a lesson in itself,” says Schlosshauer. Possibly the most revealing answer was that 48% believed that there will still be conferences on the foundations of quantum theory in 50 years time.