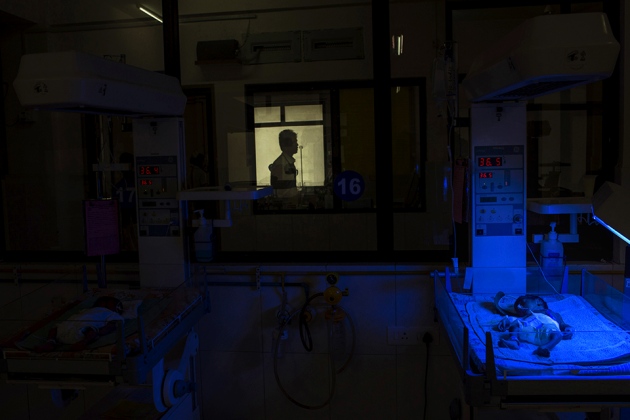 Physicians may soon have a lot more help in treating newborns.

Neuroscientists and physicians have embarked on what they hope will be a revolution in treatments to prevent brain damage in newborn babies.

As many as 800,000 babies die each year when blood and oxygen stop flowing to the brain around the time of birth. And thousands develop brain damage that causes long-lasting mental or physical disabilities, such as cerebral palsy. Physicians have few tools to prevent this, but they are optimistic that clinical trials now under way will change things.

The trials were sparked by neuroscientists’ realization in the 1990s that some brain injuries can be repaired. That discovery spurred a flurry of basic research that is just now coming to fruition in the clinic.

In January, a US study will start to test whether the hormone erythropoietin, or EPO, can prevent brain damage hours after birth when combined with hypothermia, in which babies are cooled to 33.5 °C. A trial in Australia is already testing this treatment. Physicians in countries including the United States, China and Switzerland are testing EPO in premature babies, as well as other treatments, such as melatonin, xenon, argon, magnesium, allopurinol and cord blood in full-term babies.

“The world has really changed for us,” says neurologist Janet Soul at Boston Children’s Hospital in Massachusetts.

Therapeutic hypothermia was the first success: clinical trials over the past decade have shown that it decreases the risk of death and of major brain-development disorders by as much as 60%. It is now standard treatment for babies in developed countries whose brains are deprived of blood and oxygen during birth.

“I can’t tell you how great it was to be able to do something for these babies rather than stand there and watch them have seizures,” Soul says.

But because hypothermia does not work for all babies1, scientists decided to see whether combining it with other treatments would help. EPO was known to boost the production of red blood cells even before its discovery2 in mouse brain cells in 1993, and is regularly used by physicians to treat anaemia. Neuroscientist Sandra Juul at the University of Washington in Seattle wondered what a blood-boosting hormone was doing in the brain. In subsequent animal studies, she found that the hormone stopped brain cells from dying and helped the brain to repair itself3. That led a few years later to the first clinical trials showing that EPO prevents brain damage in babies.

In June, a study conducted by Juul and her colleagues reported the results of giving EPO or a placebo, along with inducing hypothermia, just after birth to dozens of babies at risk of brain injury. Those who received EPO were less likely than those given the placebo to show signs of brain damage on magnetic resonance imaging tests done five days later4.

“I can’t tell you how great it was to be able to do something for these babies.”

Those results led to the forthcoming clinical study. Co-led by Juul and Yvonne Wu, a paediatric neurologist at the University of California, San Francisco, the trial will enrol 500 babies at risk of brain injury from 17 hospitals across the United States during their first 24 hours of life.

All the babies will be treated with hypothermia. Half will then receive five doses of EPO over seven days; the other half will get saline injections. The US$10-million trial will measure whether the hormone boosts the children’s mental and physical health at 2 years of age.

Researchers are also testing EPO in babies born as early as 23 weeks in the United States and Europe. Such premature babies are more likely to develop brain injury than are full-term babies, and smaller studies have produced conflicting results about the benefits of EPO in these very early cases.

But neonatologist Giancarlo Natalucci of the University of Zurich, who was part of a Swiss trial that found EPO didn’t improve the health of two-year-olds who had been treated as premature babies5, says that factors such as dose may account for such results. He still thinks that the treatment merits study.

The trials are difficult to conduct because it’s hard to tell whether a symptom is a side effect of treatment or the result of a baby’s underlying injuries.

But despite the hurdles, Juul and other researchers press on, driven by their desire to aid the world’s smallest patients. “They’re in such desperate need of help,” Juul says.