The ways in which rising carbon dioxide levels will affect the Amazon rainforest are still highly uncertain.

One of the wild cards in climate change is the fate of the Amazon rainforest. Will it shrivel as the region dries in a warming climate? Or will it grow even faster as the added carbon dioxide in the atmosphere spurs photosynthesis and allows plants to use water more efficiently? A dying rainforest could release gigatonnes of carbon into  the atmosphere, accelerating warming; a  CO2-fertilized forest could have the opposite effect, sucking up carbon and putting the brakes on climate change.

Climate modellers trying to build carbon fertilization into their forecasts have had  precious few data to go on. “The number one question is, how will tropical forests react if we put more CO2 into the atmosphere?” says Carlos Nobre, a climate scientist who heads research programmes at the Brazilian Ministry of Science, Technology and Innovation in Brasilia. “We don’t know.”

Now an international team of scientists is developing an ambitious experiment in the central Amazon that could study the effect in the real world. Hosted in Washington DC by the Inter-American Development Bank (IADB), a group of some 30 scientists met this month to flesh out the details of a project that would bathe a patch of rainforest in extra CO2 and, over the course of a decade or more, measure how the plants respond. The experiment, the first of its kind in the tropics, would be modelled on free-air CO2 enrichment (FACE) experiments conducted over the past couple of decades in the young and biologically simpler temperate forests of the Northern Hemisphere.

The experiment’s results could foretell the future of the Amazon. In 2000, a team at the UK Met Office’s Hadley Centre in Bracknell  proposed that drought caused by global warming could devastate the rainforest1, although other climate modellers disagreed. Since then, the Hadley team has lowered its estimates of the likelihood of drying and the resulting forest dieback2. But the Hadley Centre’s simulations, like all climate models, assume a substantial CO2-fertilization effect in the tropics.

In an atmosphere of elevated CO2, not only do plants grow faster, but also their stomata (tiny openings on their leaves) do not need to open as widely or for as long. This means that less water escapes through transpiration, which makes plants better able to withstand heat and drought. The net result is that, at least in climate models, the extent of CO2 fertilization largely determines the Amazon’s resilience to global warming.

“Let’s do it right. We only get one chance.”

Because of the sheer volume of carbon cycling through the tropics, the fertilization effect has a massive impact on the amount of carbon that forests take up globally — and on how much remains in the atmosphere. Using the Hadley Centre climate model, UK modellers showed last year3 that atmospheric CO2  levels in 2100 depended largely on the magnitude of the fertilization effect, and could vary from 669 to 1,130 parts per million (CO2 levels today stand at 395 parts per million). That range corresponds to a 2.4 °C rise in global temperatures. Richard Betts, a member of the Hadley team, says the paper showed that the effect of the CO2-fertilization feedback was potentially much larger than had been thought. “This is why we have been really keen for people to go out and study the Amazon forest,” says Betts. “Our model indicates CO2 enrichment, and we need to know how realistic it is.”

The experiments in temperate forests — rings of towers that inject CO2 into circular plots — showed an initial fertilization effect, although the long-term response varied depending on the availability of nutrients in the soil, such as nitrogen4. In theory, the fertilization effect should be stronger in the tropics, where warmer temperatures work in concert with higher CO2 levels to increase the rate of photosynthesis (but plants shut down altogether if the temperature gets too high). Nitrogen is also more plentiful in the tropics, although other nutrients, such as phosphorus, could be limiting factors.

The idea of conducting a FACE experiment in the tropics has been around for years, but proposals have tended to fizzle out amid concerns about the feasibility of working in a mature tropical forest. First among them is the forest’s diversity: how could an experiment be large enough to be representative of a forest that has thousands of species of canopy trees and a cascade of plants beneath? On this point, the scientists meeting in Washington simply threw up their hands. “At the end of the day, no experiment is representative of the totality of the biome,” says Evan DeLucia, an ecologist at the University of Illinois in Urbana-Champaign and one of the principal investigators in a FACE experiment on young pines in South Carolina.

Another challenge is developing tools to track nutrient cycles in the soil and to monitor the peculiar growth dynamics of tropical forests. For instance, most of the trees in a mature tropical forest are hardly growing,  with a minority quickly filling in gaps created by the death of old trees, says Jeff Chambers,  an ecologist at Lawrence Berkeley National Laboratory in Berkeley, California.

After two days of discussion, the group was able to converge on a basic design (see ‘Gas ring’). A pilot project, north of Manaus in the central Amazon, would consist of a ring of about 16 towers circling an area 30 metres in diameter. Sensors would monitor background CO2 levels and winds, and CO2 would be injected from the towers as needed, to boost levels within the circle by 200 parts per million. Extra rings would be added in subsequent phases to allow replication and provide  improved statistics. 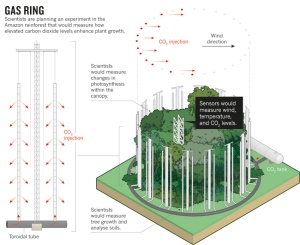 The team is exploring different options for acquiring the CO2, which could cost several million dollars annually for the full experiment. Options include buying the gas from a local beer and soft-drinks factory, and producing it independently, along with methane, from a local landfill. The team must also decide whether to build a pipeline for the CO2 or to maintain a road for the large trucks that would deliver the gas. So daunting are the challenges that the team plans to ask the engineering arm of the Brazilian military for help.

The pilot project would cost about US$10 million for the first few years, and scientists are looking to the IADB and the Brazilian Ministry of Science, Technology and Innovation for seed money. Nobre has encouraged the team to apply for a large grant from the Amazon Fund, a pot of money that Brazil uses to combat deforestation and promote sustainable development. The tentative goal is to begin fieldwork next year and to bring the pilot facility online in 2015.

Some scientists wonder whether the project will provide the answers they need at a price that politicians are willing to pay. But so far, its planners are finding themselves in the enviable position of being pushed to think big by potential funders. “Let’s do it right,” said Jerry Melillo, a senior scientist at the Marine Biological Laboratory in Woods Hole, Massachusetts, who proposed a FACE experiment in Brazil more than a decade ago. “We only get one chance.”