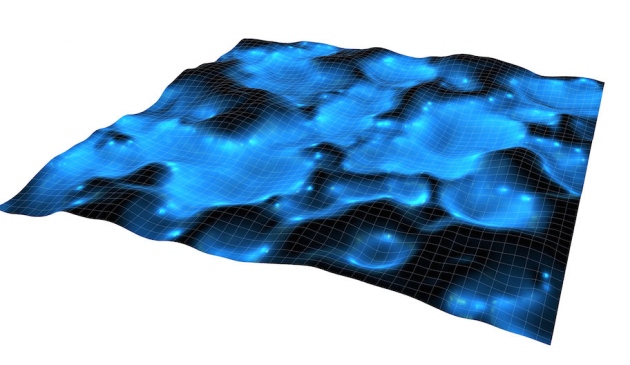 In this simulated early Universe, matter tends to concentrate under its own gravitational pull. (Darker blue regions represent higher density, and the height of hills correlates with the gravitational potential.)

For the first time, cosmologists have used the full power of Albert Einstein's general theory of relativity to perform detailed calculations of the Universe’s evolution.

The two groups’ techniques — which break with nearly a century of tradition — could help to settle a controversy over the accuracy of previous, simplified simulations, and could help researchers to interpret the results of astronomers’ increasingly precise observations.

General relativity interprets gravity as the warping of space-time. Soon after Einstein proposed his theory in 1915, others realized that it had dramatic implications on the cosmic scale. Belgian cosmologist Georges Lemaître and others pointed out in the 1920s that a Universe that satisfies Einstein’s theory should either expand or contract. (Meanwhile, astronomer Edwin Hubble and others showed that it was, in fact, expanding1.)

But solving Einstein’s equations on a cosmic scale was impossible without making assumptions to simplify the calculations. To reach their conclusions, Lemaître and the other early relativists assumed that matter was uniformly distributed as a continuum across space, rather than being concentrated in stars and galaxies.

A matter of distribution

The advent of technology did not substantially change the situation, because the full relativistic calculations were difficult even for supercomputers. Most cosmologists have continued to model the Universe, starting with the Big Bang, in this way. To explain how large structures such as galaxies and clusters of galaxies form from a diffuse primordial gas, researchers start with regions of slight 'overdensity', which then develop into lumpy structures under the pull of gravity. Such models, however, assume an uneven spread of matter only for the relatively small area that they are studying — while maintaining a uniform distribution on the largest scales.

Some cosmologists say that this was more of a necessary stratagem than a well-justified assumption. “The homogeneity of the Universe is a philosophical invention,” says Sabino Matarrese, a general-relativity theorist at the University of Padua in Italy. In the past decade or so, Matarrese and others have argued that this assumption might even have led astronomers to misinterpret their data when they concluded that the Universe’s expansion has been accelerating under the action of a mysterious ‘dark energy’.

This, he says, triggered a heated debate. But, he adds, the assumption of homogeneity “is, in part, circular reasoning, which we could try to question without getting into drama”.

Numerical relativist Eloisa Bentivegna of the University of Catania, Italy, says that, “in principle, in an inhomogeneous Universe, distant galaxies could appear as if they were receding at an accelerated pace,” mimicking the effects of dark energy.

Now, she and Marco Bruni of the University of Portsmouth, UK, and independently Glenn Starkman of Case Western Reserve University in Cleveland, Ohio, and his colleagues, have performed the first full simulations of a Universe that follows general relativity without restrictions. Each group used supercomputers to model how an early Universe expands and how its warping evolves as matter begins to gather in large pools under the force of gravity, leaving other regions with more-rarefied gas.

Their papers, which appear on 24 June in Physical Review Letters2, 3 and in Physical Review D4 , still do not reproduce the full complexity of the actual Universe, but their full embrace of relativity is ”revolutionary”, says Matarrese.

The two groups used slightly different techniques with an emphasis on different questions: the Europeans focused more on the formation of 'overdense' structures, whereas the US group concentrated on how the Universe expands and how its curvature affects the propagation of light. Both teams say that, in the future, they plan to increase the sophistication of their models and to connect them to quantities that astronomers can actually measure.

Both groups built on numerical-simulation techniques that had been developed for calculating the warping of space-time around pairs of mutually orbiting black holes and the resulting gravitational waves — the very predictions that were confirmed earlier this year5 by the Advanced Laser Interferometer Gravitational-Wave Observatory (LIGO). “It’s a marriage between numerical relativity and cosmology that hasn't happened before,” says Starkman.

It will take perhaps two decades to unravel the potential of these techniques, Matarrese says. He and others say that — while dark energy is probably here to stay — researchers will need increasingly precise predictions to interpret the results of upcoming big-science observatories. These will include data from the Square Kilometer Array in Australia and South Africa.

The big question is whether the pooling of matter in dense regions — and the subsequent formation of galaxies — can have effects on the overall expansion of the Universe. This 'back-reaction' effect might be tested by next-generation experiments, something that would be a “great triumph”, says cosmologist Scott Dodelson of the Fermi National Accelerator Laboratory (Fermilab) in Batavia, Illinois. But, he says, it is unclear yet whether the teams' techniques are necessary to understand such effects, or if the more conventional methods suffice.

Calculations by Robert Wald, a general relativity theorist at the University of Chicago in Illinois, and a colleague suggest that any such effects will be practically negligible[6]. “I’m claiming that the fact that the matter is concentrated in little blobs doesn't affect the expansion rate.” Still, he says, the fully relativistic methods will be important in corners of cosmology that involve high energies, such as the very early stages of the Big Bang or the propagation of the light elementary particles called neutrinos.

Starkman expects that, in the end, as far as the big picture is concerned, the standard model of cosmology will hold — including the existence of dark energy. “But we have to check.”