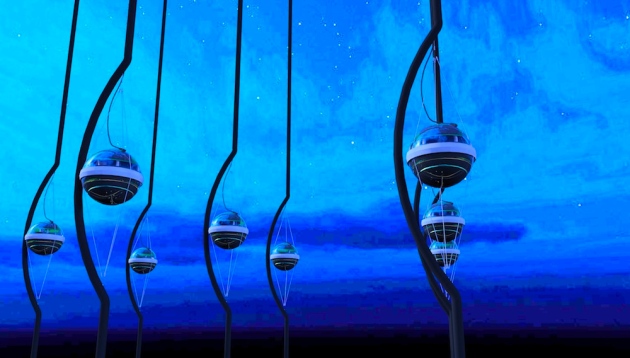 An artistic rendering of some of IceCube's more than 5,000 'digital optical modules' embedded in Antarctic ice.

A belowground experiment at the South Pole has now discovered three of the highest-energy neutrinos ever found, particles that may be created in the most violent explosions of the universe. These neutrinos all have energies at the absurdly high scale of petaelectronvolts — roughly the energy equivalent of one million times a proton’s mass. (As Albert Einstein showed in his famous E = mc2 equation, energy and mass are equivalent, and such a large amount of mass converts to an extreme level of energy.) The experiment, called IceCube, reported the discovery of the first two — nicknamed Ernie and Bert — last year, and announced the third Monday here at the American Physical Society meeting. “Internally, it’s known as Big Bird,” said IceCube physicist Chris Weaver of the University of Wisconsin–Madison.

These neutrinos are valuable because they are extremely standoffish, rarely ever interacting with other particles, and are uncharged, so their direction is never swayed by magnetic fields in the universe. Thus, their trajectories should point straight back to their source, which astronomers think could be a variety of intense events such as humongous black holes accreting matter, explosions called gamma-ray bursts or galaxies forming stars at furious rates.

This penchant for noninteraction also makes neutrinos extremely difficult to detect. The IceCube experiment looks for the very rare occasions when neutrinos collide with atoms in a cubic kilometer of ice buried underneath the South Pole. Such shielding is necessary to filter out collisions from other particles, but does not inhibit neutrinos. The experiment capitalizes on the naturally pure ice there, using a region that extends twice the depth of the Grand Canyon underground. Thousands of light detectors are imbedded in the ice to catch the little blips of light created when neutrinos are caught. Such interactions are so infrequent that IceCube researchers had to search for two years to find these three high-energy neutrinos. During that time span the instrument also detected 34 neutrinos of somewhat lower energies. Some of these neutrinos are thought to be contamination created when charged particles called cosmic rays hit Earth’s atmosphere, but some portion of IceCube’s haul likely came directly from violent processes in the cosmos. Those particles are called astrophysical neutrinos. “It looks like we have reached compelling evidence for astrophysical neutrinos,” said U.W.–Madison physicist Albrecht Karle, a member of the IceCube team.

Cosmic rays themselves are a mystery. The most energetic among them are thought to originate in the same processes that spawn astrophysical neutrinos. Yet because cosmic rays (which, despite the name, are actually high-energy particles) are charged, they travel curved paths, shaped by magnetic fields, through the universe. As a result, they do not preserve information about where they came from. Studying neutrinos is a way to try to understand the origin of high-energy cosmic rays, which are somehow sped up to nearly light-speed in some sort of cosmic particle accelerator. Just how this happens is an open question that shows just how much we do not know about the most violent processes in the universe. “This is the biggest mystery of our century,” says Toshihiro Fujii, a cosmic-ray researcher at the University of Chicago’s Kavli Institute for Cosmological Physics. Fujii was not involved in IceCube, but says its findings will aid his goal of understanding cosmic rays.

One debate about high-energy neutrinos and cosmic rays is whether they come from galactic or extragalactic sources — in other words, do they originate inside or outside our Milky Way Galaxy? Most theories favor extragalactic sources such as active galactic nuclei — supermassive black holes at the centers of other galaxies that are gorging on matter. Another option: gamma-ray bursts, the brightest explosions known in the universe, which may occur during some supernovae or when two neutron stars merge. Or maybe these particles are a by-product of galaxies that are colliding, sending shock waves through their gas that causes stars to form at furious speeds. It is even possible that dark matter, the invisible stuff that far outweighs the normal matter in the universe, is somehow creating cosmic rays and high-energy neutrinos.

Based on the direction the 37 neutrinos were traveling when they hit IceCube, few of them appear to have originated in the galactic plane, the densest part of the Milky Way. This suggests they come from outside our galaxy. “Some of the most interesting events are far from the galactic plane,” said IceCube researcher Nathan Whitehorn at U.W.–Madison. “Purely galactic explanations are hard.”

As the experiment collects more high-energy neutrinos over the coming years, IceCube’s map of neutrino sources on the sky will improve. Scientists are particularly interested in whether any of the particles IceCube sees can be traced back to known cosmological objects, such as visible active galactic nuclei or gamma-ray bursts. “To this day we don’t have any evidence of correlation with a known source,” says Naoko Kurahashi Neilson, another IceCube collaborator at U.W.–Madison, “but that is high on the list.”