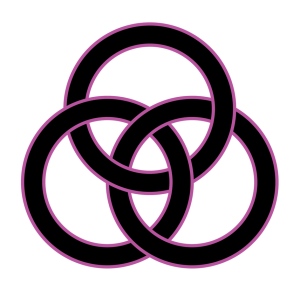 Borromean rings are linked together as a triplet, but removing any of the three rings leaves the other two unlinked. A similar phenomenon is observed in atomic triplets known as Efimov states.

In 1970 Vitaly Efimov, a physicist now at the University of Washington in Seattle, found a surprising effect hidden in the equations of quantum physics.

He calculated that when two identical particles interact too weakly to form bonds, a third one can reinforce their interaction and keep the three particles together in a stable, if loosely bound, state1. This should apply to neutral atoms, whose mutual attraction (known as Van der Waals force) can be extremely feeble.

This hypothetical configuration became known as an ‘Efimov state’, and is often compared to Borromean rings, an arrangement of three rings linked in a way that removing one ring would leave two unlinked ones. (Borromean rings get their name from the Italian aristocratic dynasty of Borromeo, which has the rings on its coat-of-arms.)

Efimov states remained a theoretical curiosity until 2006, when researchers observed them in caesium atoms2. Now the same team that made that discovery has confirmed another one of Efimov's predictions — a second, 'excited' energy state for these fragile triatomic molecules3. In this Explainer, Nature takes a closer look at these quantum states.

Why did it take so long to observe Efimov states?

Efimov states are extremely fragile — they can be observed only at extremely cold temperatures, around ten-billionths of a kelvin. At such temperatures, atoms in a gas behave more like a single wave. In 2006, physicist Rudolf Grimm of the Institute for Experimental Physics in Innsbruck, Austria, and his collaborators observed an Efimov state in a gas of caesium atoms by cooling them down to 10 nanokelvin with lasers, and then adjusting a magnetic field to nudge them into forming an Efimov state.

What is the new finding?

Efimov predicted not just one configuration but many. Just as an atom's electrons can absorb energy and jump into outer shells, an Efimov state could transition into another, excited one.  And whereas atoms can take on different shapes depending on their excited states, “for an Efimov state, the whole object gets larger while keeping its shape”, says Grimm. “It is just like with the Russian dolls, matryoshka: All the states look exactly the same, but they increase in size,” he adds. Efimov calculated that each of the successive excited three-particle states would be larger than the previous one by a factor of 22.7.

Grimm and his colleagues observed an excited Efimov state of caesium atoms. The results are compatible with Efimov's prediction of 22.7 (if experimental error is taken into account). Their results appeared in last week's Physical Review Letters2.

Such threesomes are truly gigantic. Whereas a typical three-atom molecule is less than one nanometre wide, the states observed in 2006 were roughly 50 nanometres across; the excited ones are around one micrometre — the size of a typical bacterium.

In 2009 researchers at the European Laboratory for Non-Linear Spectroscopy (LENS) in Florence observed a similar giant state in a closely related type of three-atom system — one in which two of the atoms could bind even in the absence of a third4, explains Matteo Zaccanti, a LENS physicist who led that study. Although that was evidence for the existence of excited Efimov states, “it was a bit more indirect” than what Grimm and his team have observed, Zaccanti says.

How did they do it?

The team used laser cooling and other techniques, such as evaporative cooling, to bring the gas of 30,000 caesium atoms to even lower temperatures than before, of 7 nanokelvin, and held the atoms in an 'optical trap' which locked them in place with infrared laser beams. By varying the applied magnetic field, the team tweaked the interaction energy between the atoms, and monitored how many of them escaped from the trap. The number peaked for a particular value of the magnetic field. This was the fingerprint of an excited Efimov state, says Grimm, because it was the value where Efimov triplets are expected to break down into individual atoms that escape the trap at high speed.

Efimov states are seen as a test case for a general class of systems made of three objects, which occur not only in atomic physics but in nuclear physics as well, says Jeremy Hutson, a theoretical physicist at Durham University, UK, and a co-author of the new paper. The neutron-rich nucleus of the lithium-11 isotope, for example, has two loosely bound neutrons in addition to a tighter body of neutrons and protons — and removing one of these two neutrons causes the other to be lost too.

Grimm says Efimov states could also lead to the discovery of a new, unconventional class of superconductors. In ordinary superconductors, electrons form pairs that are able to move through the material in tandem without electrical resistance. But perhaps the electron pairs in some materials could be replaced by Efimov-like triplets.

The next stage for Efimov physics could take place in space, where microgravity could help to reach temperatures not attainable in ground-based labs, and to let Efimov states last longer, Grimm explains. NASA's recently approved Cold Atom Laboratory, scheduled to launch to the International Space Station in 2016, should achieve temperatures of 100 picokelvin, and will conduct research on Efimov states among other experiments.

“What we usually understand quite well are systems of either two or many interacting particles. The few-body world in between has its own rules and holds many surprises,” says Grimm. “We need to bridge the gap in understanding between two and many.”