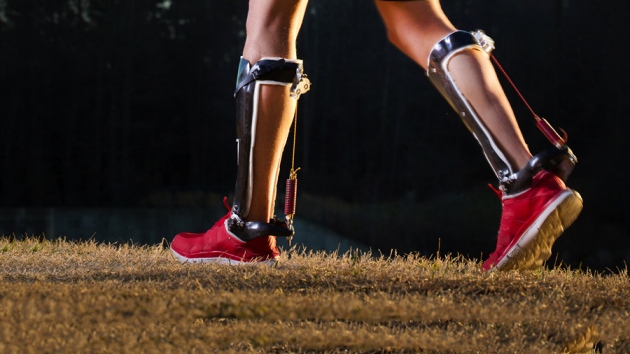 An unpowered exoskeleton makes walking more efficient, by engaging a spring in parallel with the Achilles tendon.

Boots rigged with a simple spring-and-ratchet mechanism are the first devices that do not require power aids such as batteries to make walking more energy efficient.

People walking in the boots expend 7% less energy than they do walking in normal shoes, the devices’ inventors report on 1 April in Nature1. That may not sound like much, but the mechanics of the human body have been shaped by millions of years of evolution, and some experts had doubted that there was room for further improvement in human locomotion, short of skating along on wheels.

“It is the first paper of which I’m aware that demonstrates that a passive system can reduce energy expenditure during walking,” says Michael Goldfarb, a mechanical engineer at Vanderbilt University in Nashville, Tennessee, who develops exoskeletons for aiding people with disabilities.

As early as the 1890s, inventors tried to boost the efficiency of walking by using devices such as rubber bands, says study co-author Gregory Sawicki, a biomedical engineer and locomotion physiologist at North Carolina State University in Raleigh. More recently, engineers have built unpowered exoskeletons that enable people to do tasks such as lifting heavier weights — but do not cut down the energy they expend. (Biomechanists still debate whether the running ‘blades’ made famous by South African sprinter Oscar Pistorius are more energetically efficient than human feet.2, 3)

For their device, Sawicki and his colleagues built a mechanism that parallels human physiology. When a person swings a leg forward to walk, elastic energy is stored mostly in the Achilles tendon of their standing leg. That energy is released when the standing leg's foot pushes into the ground and the heel lifts off, propelling the body forwards. “There is basically a catapult in our ankle,” Sawicki says.

In order to efficiently store elastic energy in the Achilles tendon, the calf muscles above must resist stretching themselves. Much of the energy required to walk is expended in 'locking' the calf muscles — preventing them stretching. That is an inherent inefficiency of muscle physiology, says neuromechanist Max Donelan, at Simon Fraser University in Burnaby, Canada. Mechanical clutches have an advantage over muscles because they lock into place without consuming energy, he says.

The researchers’ exoskeleton structures, built of lightweight carbon-based materials, have a spring that connects the back of the foot to just below the back of the knee, where it attaches with a mechanical clutch (see video). When the Achilles tendon is being stretched, the clutch is engaged and the spring, rather like an additional tendon, stretches and helps to store energy. After the standing leg pushes down, unleashing elastic energy, the clutch releases and absorbs the slack in the spring, in preparation for the next cycle..

Walking with the exoskeletons

The team has experimented with the invention for years, but was only recently able to cut down its weight down to less than half a kilogram per leg, light enough to provide a net energetic benefit.

A potential snag, Goldfarb says, is that the 7% boost in efficiency applies only at normal walking speed on level ground. Study co-author Steven Collins, a biomechanical engineer at Carnegie Mellon University in Pittsburgh, Pennsylvania, says that his team is now testing the device in a broader range of conditions. But he says that the boots seem promising from his experience in wearing them. “Subjectively, it feels great on hills, cross-slopes, picking your way through tree roots, going up stairs, and so on.”

The researchers plan to experiment with 'smart' clutches, which would have embedded electronics that adjust the timing of the release in response to an individual’s style of walking and perhaps also to sloping terrain. They also hope to team up with a sports-apparel company to turn their idea into a commercial product, which they hope would cost less than a pair of ski boots. “I would think that’s the goal — to make it reasonably affordable,” Sawicki says. An important application could be to help people to improve their walking ability after having a stroke, he says.

But is making walking easier the best way to go from a public-health perspective? “I get this question a lot,” Sawicki says. “Why would you want to reduce energy? Don’t we have an obesity problem?” But he thinks that the balance of costs and benefits could tip either way, and could be positive if it encourages people who find it hard to move to get out more. “For a 65-year-old active person, it could really prolong their active years.”