Too close for comfort

The planet Kepler-78b is thought to have a composition similar to Earth's but orbits so close to its star that surface temperatures may reach as high as 3,100 Kelvin.
MARCO GALLIANI/MEDIA INAF

Two groups of researchers have for the first time succeeded in measuring the mass of an Earth-sized exoplanet — in this case, Kepler-78b, which is only slightly wider than Earth and orbits a star in the constellation Cygnus, 123 parsecs (400 light years) away.

Astronomers are getting better at finding the many small, Earth-sized planets that scatter the Universe outside our Solar System, but finding clues to what they are made of is much harder.

The figures for Kepler-78b are published today in Nature1, 2 and show that the planet’s density is similar to that of Earth, suggesting that it also has a similar composition of rock and iron.

That, however, is where the similarities end. Kepler-78b travels in orbit about 40 times closer to its star than Mercury is to the Sun; its year lasts just 8.5 hours; and its surface is thought to reach a scorching 2,300–3,100 Kelvin.

Kepler-78b is one of a recently-discovered class of exoplanets with orbital periods much shorter than one day, says astronomer Francesco Pepe of the University of Geneva in Switzerland, who led one of the teams that calculated the planet’s mass2. “It can be imagined like a lava planet rather than an Earth-like planet,” he says.

It is unclear how Kepler-78b got so close to its star and whether it is falling in further, he adds.

The mass of an exoplanet is usually calculated on the basis of the ‘wobble’ motion that the orbiting planet's gravitational pull exerts on its host star — a motion measured as changes in the speed with which the star moves towards or away from Earth by looking at Doppler shifts in the star's light. The mass of exoplanets the size of Earth is usually hard to estimate because they have a very small influence on their stars. But Kepler-78b — whose size and orbit were first calculated by a team of astronomers in August3 using NASA's Kepler observatory — is close enough to its star to cause a measurable wobble. 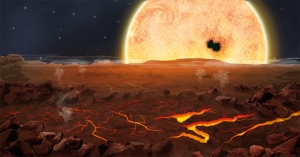 An artist's impression of a view from the planet's molten surface (click to enlarge).

Using data from the High Accuracy Radial Velocity Planet Searcher-North (HARPS-N) spectrograph at the National Galileo Telescope in the Canary Islands, Pepe and his team calculated the planet’s mass at 1.86 times that of the Earth2.

This tallied with results of another team led by astronomer Andrew Howard of the University of Hawaii at Manoa, which put the mass at 1.69 times that of Earth, using data from the High Resolution Echelle Spectrometer on the Keck 1 Telescope at the W.M. Keck Observatory in Hawaii1.

“This is a very difficult measurement, so someone might be sceptical if only one of us published,” says Howard. The confirmation makes the results “rock solid”, he adds.

Sara Seager, a planetary scientist at the Massachusetts Institute of Technology (MIT) in Cambridge and member of the Kepler science team, says the results represented “an inevitable march towards other Earths”.

“In this case the new discovery may seem like an incremental step,” says Seager, who was not involved in either of the new studies. ”But astronomers are excited because in terms of mass and size and composition it's the closest to Earth we have, though the orbit is so much different and the planet so much hotter than Earth.”

Earth-like planets in Earth-like orbits are likely to be abundant within the Universe, but because their stars’ corresponding wobble is tiny, finding their mass will considerably more difficult than it was in Kepler-78b's case.

But Pepe thinks that HARPS-N could find Earth-sized planets in wider orbits, if they belong to “quieter” systems, in which low activity on the surface of the star makes the planets’ influence easier to detect. “If we are very lucky,” he adds.