Footballers’ brain disease A study of the brains of 202 American-football players has revealed that 87% had chronic traumatic encephalopathy, a neurodegenerative disease associated with repeated head injuries. In the analysis, published on 25 July (J. Mez et al. J. Am. Med. Assoc. 318, 360–370; 2017), the authors found that more than 99% of the professional athletes in the sample had the disease (seen in brown staining), as did 91% of people who had played American football on university teams. The brains included in the study were from players who had been exposed to repetitive head trauma. 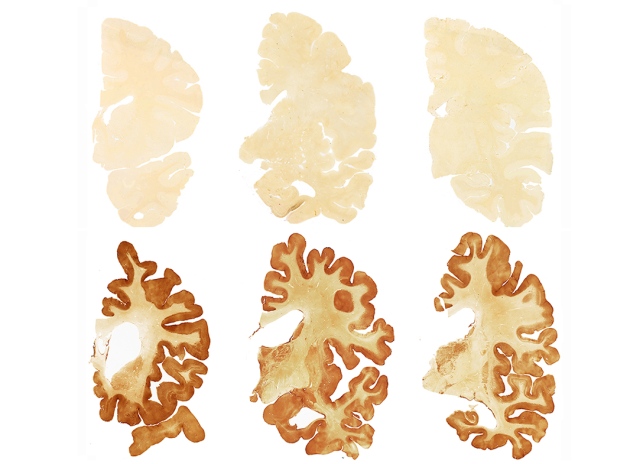 Exomoon candidate A team of astronomers has reported a hint of what could become the first discovery of a moon orbiting a planet outside our Solar System. In a preprint article posted on 27 July, researchers say they have observed evidence for an exomoon circling the suspected exoplanet Kepler-1625 b, 1,213 parsecs from Earth (A. Teachey et al. Preprint at http://arxiv.org/abs/1707.08563; 2017). The possible presence of the moon was inferred from lopsided dips in the host star’s brightness, as viewed by the Kepler space telescope. The researchers decided to make their results public after someone noticed that the team had scheduled observing time on the Hubble Space Telescope, and tweeted about it.

Ethical oversight Many US institutions that receive grants from the National Science Foundation (NSF) are not properly training their staff in responsible research conduct, according to a 25 July report from the office of the NSF’s inspector-general. The office surveyed 48 institutions with NSF grants that required them to have policies on ethics training for their researchers and students, as well as someone designated to ensure compliance. Eleven of the institutions had no such plans in place. Most of the remaining institutions required ethics training for people directly funded by the NSF, but the report suggests extending the training to everyone in a lab.

Author scandal China’s science ministry announced on 27 July that 486 authors were guilty of misconduct in a scandal concerning fake peer reviews. In April, the journal Tumor Biology retracted 107 papers written by Chinese scientists after its publisher, Springer Nature, determined that fabricated reviews had been submitted to support those publications. (Springer Nature no longer publishes the journal; it does publish Nature, but the news team is editorially independent of the publisher.) The ministry found 172 authors responsible for the fraud; the remaining 314 were found guilty of neglecting their  obligations as supervisors. Another 11 authors were cleared of wrongdoing, and 24 are still under investigation. Those guilty of misconduct face punishments including temporary bans on conducting research, having grant proposals cancelled, being forced to return funding and losing awards.

Quantum computer A US start-up firm announced on 26 July that it plans to provide commercial quantum-computing services by the second half of 2018. IonQ in College Park, Maryland, is only the second company to do so, after IBM began a similar service called IBM Q last May. IonQ’s machine will store up to 32 qubits, the quantum equivalent of a classical bit of information, and encode them in ions held in electromagnetic ‘traps’. IBM Q currently offers 17 qubits and uses a competing technology, superconducting loops. Experts say that quantum computers will need to become larger before they can be useful, but researchers are keen to practise with the nascent technology.

Climate missive Sixteen US scientific societies wrote to the Environmental Protection Agency on 31 July, asking to meet agency chief Scott Pruitt over his controversial plans to set up opposing teams to publicly debate the scientific basis of climate change. The societies noted that climate science is sound and that the peer-review process constantly tests the robustness of research results. Using policy disagreements as a pretext to challenge scientific conclusions damages the integrity of the scientific process, said the letter.

Africa primate club Efforts to protect Africa’s primates received a boost with the inauguration of the African Primatological Society at a congress held on 24–27 July near Abidjan in Côte d’Ivoire. Continental Africa is home to 111 primate species, 37% of which are threatened with extinction; the island of Madagascar is home to another 103, 87% of which are under threat. Experts hope that the society will usher in an era of primate research and conservation across the continent. 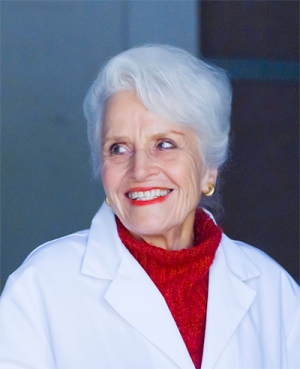 Neuroscientist dies Marian Diamond, who first demonstrated the brain’s plasticity, died on 25 July, aged 90. In the 1960s, Diamond (pictured) used rats to show that an animal’s environment can affect the anatomy of its brain, undercutting the view at the time that the genome was solely responsible for shaping an individual. Her study of Albert Einstein’s brain in the 1980s found that he had an unusually large number of glial cells, which had long been viewed as simple support structures in the brain. Diamond worked at the University of California, Berkeley, and retired in 2014.

Telescope trials A retired judge has recommended that Hawaii’s Board of Land and Natural Resources grant a new construction permit for the Thirty Meter Telescope (TMT) project, a US$1.4-billion observatory planned for the mountain of Mauna Kea. Opponents say that the structure would further desecrate a summit that already houses several telescopes and is considered sacred by Native Hawaiians. In 2015, after legal challenges, the state’s supreme court rescinded the original permit. But on 26 July, after 44 days of testimony, Judge Riki May Amano ruled in favour of the project, as long as the team implements appropriate cultural protections. If construction cannot begin by April 2018, officials are likely to turn to their back-up site in the Canary Islands.

UK car ban The UK government announced on 26 July that it will ban the sale of new diesel and petrol cars and vans from 2040, as part of a £3-billion (US$4-billion) effort to improve air quality. The measure is aimed at reducing nitrogen dioxide pollution, which is largely emitted by road vehicles. Levels of the pollutant in several areas of the United Kingdom are routinely above the legal limit set by the European Union. UK environmental-law firm ClientEarth criticized the proposals as lacking urgency.

Australian ant plan The Australian government will spend Aus$411 million (US$328 million) to eradicate red imported fire ants, which are a threat to agriculture, human and animal health and the economy. On 26 July, ministers revealed a ten-year plan to eliminate the insect, which has a painful sting that can cause severe allergic reactions. Red imported fire ants (Solenopsis invicta) were first seen in Australia in 2001, and an eradication programme in Queensland has cost more than Aus$340 million.

Poland defies ban Poland said on 31 July that controversial logging in the Białowieża forest will continue regardless of a ban imposed by Europe’s highest court. Following a complaint from the European Commission, the Court of Justice of the European Union last week ordered Poland to immediately stop logging in the ancient forest, a biodiversity hotspot. But environment minister Jan Szyszko said that Poland will not comply with the ban, because more trees need be felled to protect the forest from a severe outbreak of bark beetle. The country risks heavy fines by defying the court’s ruling, which is an interim decision in an ongoing dispute but cannot be appealed. Its non-compliance with a rare environmental injunction sets a legal precedent, experts say.

Almost half of the scholarly papers that people try to read are freely available online, suggests a study of the prevalence of open access in academic publishing. The analysis, to be posted at PeerJ Preprints, tracked papers visited by users of the web-browser extension Unpaywall, which trawls the web to find free-to-read versions of paywalled papers. For a week in June, the authors analysed 100,000 papers accessed by Unpaywall users and found that 47% were legally available somewhere on the web. 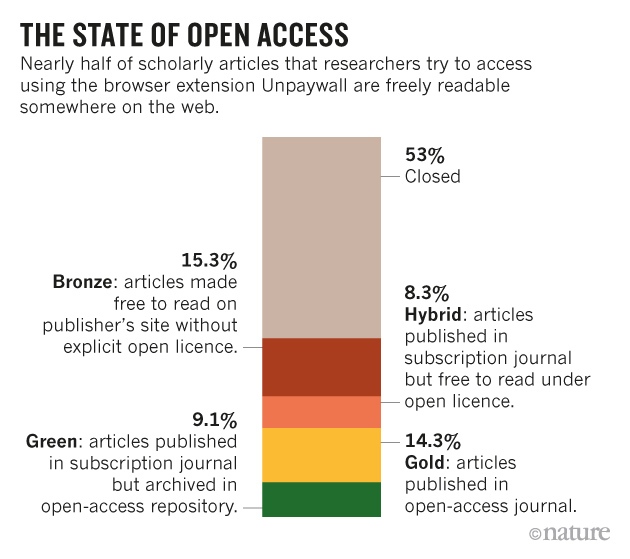 US energy hubs Five US energy-innovation hubs marked for elimination by the White House might live on after all. On 26 July, the House of Representatives passed an amendment to a funding bill for next year that reverses the House’s earlier attempt to scrap the Department of Energy programme, which was established during Barack Obama’s presidency. The Senate’s version of the bill also renews funding for the hubs; a Senate subcommittee had starkly criticized the House’s attempt to end them. Each hub focuses on one of five major energy-related goals: artificial photosynthesis, battery technology, new materials, nuclear-reactor simulation and energy-efficient seawater desalination.

NASA camera snag Four cameras designed to hunt for exoplanets will go slightly out of focus once they reach space — because of the extreme cold. The issue, discussed in a 24 July meeting of the NASA Advisory Council science committee, should not stop the instruments from collecting data, the agency says. The cameras are part of the Transiting Exoplanet Survey Satellite — set to launch next March — and will measure the brightness of nearby stars. Periodic dips in starlight could indicate an orbiting planet. Light sensitivity is more important than resolution and only the edges of images will be blurred, so the focus issue should not affect the science in a major way, NASA says.