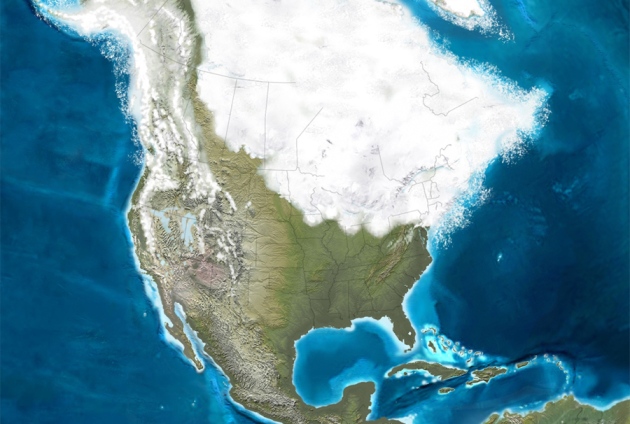 An asteroid impact in North America during the last Ice Age could be what pushed temperatures even lower, in a cold snap known as the Younger Dryas.

The dust refuses to settle on a debate about whether asteroid impacts caused one of Earth’s most famous cold snaps 12,900 years ago.

The latest evidence in the contentious discussion comes in the form of pieces of bedrock from Quebec, Canada, that seem to have been blasted out as far as Pennsylvania. “I’d say there’s evidence of an impact happening, for sure,” says Mukul Sharma, an isotope geochemist at Dartmouth College in Hanover, New Hampshire, and co-author of a study published this week in Proceedings of the National Academy of Sciences1.

Between 11,600 and 12,900 years ago, the planet’s climate changed rapidly: in northern climes such as Greenland, temperatures dropped by several degrees in less than a century. No one knows what caused the deep freeze, known as the Younger Dryas.

The leading theory is that shifting North American glaciers allowed freshwater melt to pour into the Atlantic or Arctic oceans, slowing ocean circulation and cooling the Northern Hemisphere. This idea has spawned worries that fresh water from today’s melting ice might also spur rapid climate change.

An alternative theory is that meteorites or comets smacked into or exploded above North America, sparking fires, kicking up a haze of dust and soot and prompting glacial collapse. In 2007, researchers reported evidence for such an event in the remains of human settlements that existed across the continent at the time.

Critics of the impact theory have been unable to repeat many of those studies, and have questioned whether the particles found were really from an impact blast. And no one has found evidence for raging fires across North America. “It doesn’t seem to me that they have constructed a very good case,” says sedimentary geologist Bruce Simonson of Oberlin College in Ohio. “If this is the best boat they can build, it’s just not sailing yet.”

But the idea keeps gathering pace; it is now backed by about 55 authors, who have published 11 research papers between them, says James Kennett, a palaeoceanographer at the University of California, Santa Barbara, who has been one of the theory’s leading proponents. “It continues to grow,” he says. In July, a different group of researchers looking at ice cores from Greenland reported2 finding meteoric platinum from a large impact at the time of the Younger Dryas. 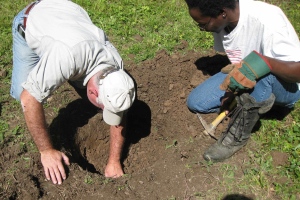 Sharma and his colleagues are now entering the fray. Sharma says that the minerals he found in deep Pennsylvanian soil were created at temperatures higher than 2,000 ºC, and formed glassy droplets that fused together in mid-air. These can be explained only by an impact, he says; an industrial blast furnace could make them, but any potential source is too recent and too far away. “We lucked out,” says Sharma.

The minerals were identified after Yvonne Malinowski, a Pennsylvania resident, saw a television documentary about the Younger Dryas and sent Kennett a box of rocks she found on her land. Kennett then passed the information on to Sharma.

The isotopic composition of the minerals indicates that the rock came from a several-thousand-square-kilometre patch of land in Quebec, hinting that an asteroid blasted through North America’s ice to melt and eject rock from the ground, says Sharma. “This is unequivocal evidence for an impact with Earth,” says Kennett.

Palaeoclimatologist Anders Carlson at the University of Wisconsin–Madison is not convinced that these glassy droplets are as unique or as meaningful as Sharma thinks. “You see the same evidence from periods when there wasn’t a Younger Dryas,” he notes.

Sharma says that the key will be to find the crater. Although he has no experience in crater-hunting, he is now putting together a proposal. But Mark Boslough, an impact physicist from Sandia National Laboratories in Albuquerque, New Mexico, thinks that a find is unlikely. If there had been an impact, “there’d be a great big obvious crater”, he says. “We wouldn’t have to argue about it.”

Steven Stanley, a paleobiologist from the University of Hawaii at Manoa in Honolulu, has acted as a ‘personal editor’ on several of the PNAS papers on this topic, including the new work by Sharma and the original 2007 paper proposing the idea. “It has been very controversial,” he admits. “It’s my view that I should help to get this stuff published. It needs to be aired; it’s not outlandish.” PNAS typically uses a 'personal editor' option for papers considered too controversial to receive a fair hearing from the standard review process.

Stanley says he is increasingly convinced by the impact theory as a mechanism for what prompted the freshwater floods. “I’m not sure how people can be so negative at this point. The case just builds.”