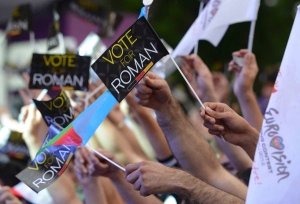 Patriotic feelings run high at the Eurovision Song Contest — but so does solidarity among countries in crisis.

The European debt crisis is threatening millions of jobs, undermining the common European currency and causing civil unrest. Now two researchers have identified another disturbing consequence: the crisis may be skewing the results of the annual Eurovision Song Contest.

As the economies of countries such as Greece and Portugal flirted with disaster in 2010–11, voting patterns in the competition changed significantly, becoming more polarized. The nations most affected apparently began to favour other ones in crisis, as if to show solidarity, and 'likes' and 'dislikes' became more pronounced overall. The researchers report these results in a study posted on the preprint server arXiv1.

This isn’t the first suggestion that the Eurovision Song Contest might contain hidden information about cultural trends and opinions2, 3. In fact, Eurovision — which is variously considered a kitsch embarrassment and an opportunity for national glory — has been explored so avidly that the pursuit has been given its own label: eurovisiopsephology, psephology being the dubious science of analysing and interpreting elections.

However whimsical it might seem to analyse the statistics of a competition best known for bizarre costumes and silly song titles, there is increasing evidence that mining of data from prosaic sources such as news media, Twitter feeds and public competitions may uncover aspects of social opinion that are otherwise invisible. Since 1998, Eurovision rankings have been determined by a mixture of jury votes and votes from viewers; this populist angle has the potential to sample how countries feel not only about the performances, but also about one another.

In the latest study, David García and Dorian Tanase, systems scientists at the Swiss Federal Institute of Technology (ETH) in Zurich, used voting patterns to construct networks of affinity among 51 participating countries between 1975 (when the previous voting system changed) and 2011.

In each year, the researchers considered countries to be connected with a ‘weight’ given by the marks that each of them awarded to the others. From this weighting they could deduce the positive and negative affinities between nations. It had been shown previously that such networks contain clusters of geographically close and culturally related countries, implying that national affinities affect voting4, although this interpretation has been questioned5.

García and Tanase found that, among the 15 countries that have been members of the European Union since 1995, both the positive and negative biases were larger in 2010 and 2011 than before: in other words, opinions became more polarized. This period, the researchers point out, corresponds to a time of European economic turbulence due to debt, loans and austerity measures, especially in Greece, Spain, Portugal, Ireland and Italy.

What’s more, those unfortunate countries seemed to cluster together in the network as if huddling for consolation — with the exception of Ireland, which joined a second cluster of less-affected countries. The researchers suggest that Eurovision voting might be reflecting feelings of tension and a breakdown of cohesion in the European Union.

“This is a nice study,” says Neil Johnson, a physicist at the University of Miami in Florida who has previously analysed Eurovision statistics. But he remains sceptical about the interpretation of the 2010–11 results, saying that “it could just be a statistical fluctuation”.

García acknowledges this, but adds that “the fluctuation of 2010–11 is the only one since televoting was included in 1998”. The 2012 results show no such polarization. “To draw a clear relation between the crisis and this measure of polarization, we need more data,” says García.

Johnson says that more insight into the underlying social dynamics might be obtained by studying Twitter feeds while the contest is in progress.