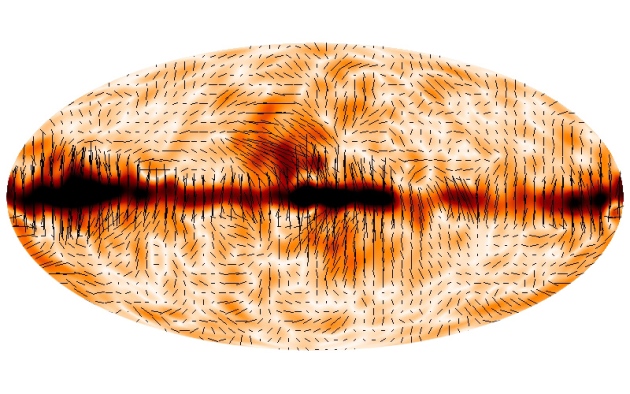 The first full analysis of the data gathered by the European Space Agency’s Planck spacecraft has resolved some conundrums raised by earlier cosmology studies — but has made the riddle of dark matter more obscure. The Planck team did not yet address a controversy over the gravitational waves from the Big Bang announced in March, but plans to do so in an upcoming study.

The space observatory has produced the most detailed full-sky survey yet of the cosmic microwave background (CMB), radiation left over from the explosive birth of the Universe some 13.8 billion years ago. The maps are based on all four years of Planck observations, from launch in 2009 to decommissioning in 2013, and include both the temperature and the polarization of the CMB.

Preliminary maps released last year had used just the first 15 months of data, and had only contained data about the temperature. Earlier this year, the team released maps of the polarization caused by galactic dust, which must be subtracted to reveal the background of primordial radiation. “The galaxy produces a lot of noise“ in the microwave signal, across almost the entire sky, said Planck astrophysicist Nazzareno Mandolesi as he presented the latest maps to the press on 1 December in Ferrara, Italy, during a conference on the latest Planck results. Previously, that noise had been recognized only in parts of the sky close to the visible Milky Way, said Mandolesi, who is from the University of Ferrara.

The observations — which used the CMB to examine minuscule temperature fluctuations in the early Universe from which all the structure in the Universe arose — reaffirm the standard model of cosmic evolution. But they put into question earlier claims to have detected evidence of dark matter, the invisible particles whose gravity keeps galaxies from flying apart.

The dark-matter riddle relates to an unexpected excess of positrons — the antimatter partners of electrons — among cosmic rays, highly energetic particles swirling around the galaxy. Theory predicts that at high energies, the ratio of positrons to electrons ought to be lower than it is at lower energies. But observations from the Alpha Magnetic Spectrometer, a particle detector on the International Space Station, revealed last year that the ratio of positrons to electrons actually increases with energy1. This confirmed earlier results from NASA's Fermi Gamma-ray Space Telescope and from the European satellite PAMELA (Payload for Antimatter Matter Exploration and Light-nuclei Astrophysics).

Researchers have suggested that the positron excess could be caused by collisions in which dark-matter particles annihilate each other and produce a shower of debris, including positrons. This interpretation would be consistent only with models of dark matter in which the particles collide and annihilate at a high rate.

Such collisions would have occurred in the early Universe as well, and in particular at the time when the CMB was first released into space — around 380,000 years after the Big Bang. If the probability of dark matter particles colliding was as high back then as it is now, Planck would have detected their imprint on the CMB2. But it did not, says Planck researcher Francois Bouchet of the Institute of Astrophysics in Paris. The positron signal could still be due to dark matter, but only if the probability of dark-matter collisions was substantially lower in the early Universe than it is today. This is possible in some models of dark matter but not in others.

Although they appear to rule out one class of dark-matter models, the latest Planck data confirm that 26% of the total mass–energy budget of the Universe is made up of dark matter.

Planck's maps also provide validation for the theory that in its infancy, the Universe underwent a brief but enormous growth spurt known as inflation, says Planck researcher François Bouchet of the Institute of Astrophysics of Paris. The preliminary Planck data had already provided support for inflation — as had earlier experiments, including NASA’s Wilkinson Microwave Anisotropy Probe (WMAP). However, Bouchet says, the latest Planck analysis goes further, favouring the simplest models of inflation, in which the size of temperature fluctuations is, on average, the same on all distance scales.

“The standard cosmological model is in very good shape,” says theorist Dick Bond of the Canadian Institute for Theoretical Astrophysics at the University of Toronto, who is part of the Planck collaboration. Cosmologist Matias Zaldarriaga of the Institute for Advanced Study in Princeton, New Jersey, agrees. "Overall, the standard model seems to continue to fit very well, error bars have gone down and nothing anomalous has yet shown up,” he says.

The new Planck maps also remove an apparent mismatch between Planck and WMAP data concerning such cosmic parameters as the density and distribution of matter, Bouchet notes. Planck's values are now closer to WMAP's, he says.

Another discrepancy that had been raised by earlier cosmological data concerned the age of the Universe when the first generation of stars formed, generating enough ultraviolet light to ionize hydrogen atoms in the interstellar medium. WMAP's results had found that the stars formed when the Universe was around 400 million years of age3. But observations of quasar light have suggested that the stars could have formed between 700 million and 800 million years after the birth of the Universe4. The latest CMB data from Planck are now converging on the quasar value, says Mandolesi.

The full Planck analysis also confirms, with a margin of error about 30% narrower than in 2013, that the subatomic particles called neutrinos come in three types. In combination with observations from other telescopes, the data imply that the total mass of the three known neutrinos types is less than 0.21 electronvolts. (An electron weighs about 511,000 electronvolts.) This makes a fourth type of neutrino, the proposed 'sterile neutrino', unlikely to exist, Mandolesi says.

The European Space Agency will make the full Planck data set available online on 22 December. And some time next year, the Planck team expects to release the results of a joint analysis with the team of the South Pole-based BICEP2 telescope. Cosmologists hope that this will establish whether a controversial signal announced by BICEP2 in March was evidence of primordial gravitational waves from or merely noise from galactic dust.

An earlier version of this article stated, incorrectly, that Dick Bond is not a member of the Planck collaboration.

An earlier version of this article stated, incorrectly, that according to Planck's observations, the probability of collision of dark-matter particles must remain the same over time to account for the structure of the Universe.