Europe’s attempts to reform its much-criticized fisheries policy took a major step forward at a meeting in Luxembourg yesterday, but left policy experts concerned that the reforms do not go far enough to safeguard fish stocks.

Although there was celebration over a ban on 'discards' — throwing unwanted fish back into the ocean — and a pledge to heed scientists’ advice on fisheries, some fisheries experts are already expressing scepticism about the plans. 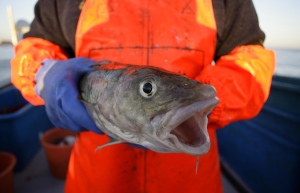 Throwing unwanted cod back into the ocean is likely to be banned under reforms to Europe's fisheries policy.

But Markus Knigge, a policy expert at the Pew Environment Group, a conservation organization headquartered in Washington DC, told Nature that “they didn’t go far enough. We are not very happy at all”.

Researchers have been warning for years that Europe’s fishing fleets take far more fish from the sea than is sustainable, and that scientific advice is routinely ignored when limits on catches are set. But changing the Common Fisheries Policy that governs EU catches has been repeatedly scuppered by political infighting. After 24 hours of talks, which started yesterday morning, fisheries ministers of the EU Council approved a series of reforms to the policy based on proposals that were produced by the European Commission in May last year (see 'Too few fish in the sea').

The final text of the council agreement has not yet been released, but Gjerskov said that member states agreed to put an end to the “wasteful practice of discards”, in which fishing boats throw back by-catch fish that are not their intended target or that are below minimum size. These discarded fish often have little chance of survival, and a high-profile public campaign has championed banning the wasteful practice.

Saskia Richartz, oceans policy director at Greenpeace EU in Brussels, says that her group is very concerned about the details of the discards policy. The ban does not encompass all species, and it is likely that a low level of discarding will still be allowed. This would make it difficult for fisheries inspectors to police the ban, because they could see fish being discarded and be unable to determine whether or not it is legal. In addition, says Richartz, there are suggestions that some by-catch could be sold for profit, opening up markets in new species and further increasing the pressure on fish stocks. Any money made from sales should go to enforcement and research, she says.

On the broader issue of ensuring that fish stocks are actually sustainable, Gjerskov said that member states had “embraced the concept” of maximum sustainable yield (MSY).

Gjerskov said that the council had committed to bringing catches down to MSY limits by 2015 “where possible” and by 2020 “at the latest”. Richartz argues that this gives fisheries managers a free hand to "set the quotas higher than the scientific advice” for the next decade. Under existing international commitments, fish stocks in Europe should be fished at no more than MSY by 2015.

Tim Daw, a fisheries scientist at the University of East Anglia in Norwich, UK, says that some of the problems for Europe’s fisheries stem from the top-down ‘command and control’ system that has evolved. Daw, who holds a joint appointment at the Stockholm Resilience Centre, which conducts work on sustainable governance and management, says that there are promising examples of better management to be found at local levels, such as the regional advisory councils. Yesterday's EU Council negotiations did commit to reorganizing fisheries management so that countries can work together regionally, rather than through the current centralized bureaucracy.

Under the Byzantine processes of agreeing legislation in Europe, the European Parliament is due to discuss reform to the Common Fisheries Policy later this year. Although it will be a tough fight, says Richartz, it is likely that Parliament will come up with a text that is stronger on sustainability issues. That will put the onus on the EU Council to come back with a better proposal, she hopes.

Speaking after the lengthy negotiations between ministers, Gjerskov cautioned that “we all need to remember that policy is the art of the possible. That’s what we did tonight: what was possible.”