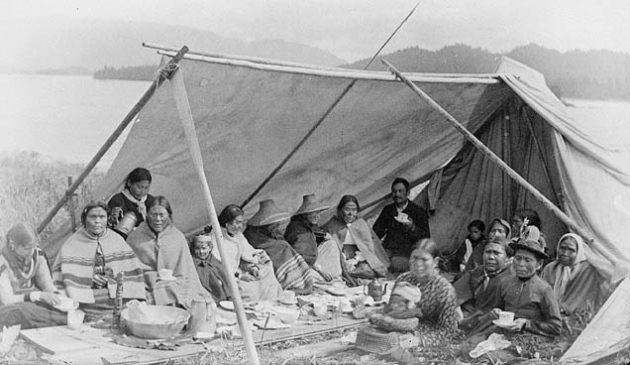 The Tsimshian people of northwestern Canada (pictured in 1890) suffered a population crash in the nineteenth century.

Epidemics from Europe that killed thousands of indigenous Canadians in the nineteenth century have left their signatures in the genomes of the people living there today, researchers say.

The Tsimshian people, who live in coastal British Columbia and Alaska and are among Canada’s First Nations, suffered a severe population crash around the nineteenth century, as European colonizers brought diseases including smallpox to communities that had not acquired resistance.

The population decline is documented in reports from the time and in oral histories. But it may also show up in changes in immune-system genes, say geneticists who sequenced the genomes of 25 Tsimshian people and compared them with the DNA of 25 people who lived in the same region between 6,000 and 1,000 years ago. The ancient DNA was obtained — with permission from Tsimshian communities — from corpses stored in the Canadian Museum of History in Gatineau.

After analysing the ancient and modern genomes, the scientists were confident that they were following a single population through time. And when they compared the genomes, they spotted clear shifts in a particular class of human leukocyte antigen (HLA) gene, which is associated with immune-system reactions. Most of today's Tsimshians had different versions of the gene than their ancestors — implying that there had been a strong evolutionary pressure on the population to adapt to pathogens that had hit at some time in the past.

The finding backs up what is widely believed, but study co-author John Lindo, a geneticist at the University of Chicago in Illinois, says he was surprised to see his expectations confirmed so clearly. “I hadn’t expected to see such a dramatic change between the two time periods,” he says.

By building a demographic model that assumed that the Tsimishian population had crashed at some point in the past 500 years after European contact, the researchers say the best explanation for their genetic data is a sudden population decline around 175 years ago, during the early-to-mid nineteenth century. Lindo and his colleagues extrapolated from the genetic pattern that the Tsimshian population may have shrunk by some 57% — reasonably close to historical accounts that suggest a 70% decrease due to a smallpox epidemic. Their results are published in Nature Communications1.

“We have always had these hypotheses: demographic collapse, responses to European-introduced diseases,” says Jennifer Raff, an anthropologist at the University of Kansas in Lawrence. But it is valuable to use genetic data to show how populations responded to European colonization, she says.

Raff, who also works with First Nations communities, mostly in the Arctic, is impressed with how the researchers involved Tsimshian people in the study. Scientists are starting to heal rifts with indigenous communities after a history of mistrust, in which researchers focusing on scientific results didn’t give their study participants a say on what was done with genetic material and human remains.

The latest study’s lead author, anthropologist Ripan Malhi of the University of Illinois in Urbana, began to work with Tsimshians in 2007, and says he visits annually to communicate with research participants, Elders and First Nations governments. The paper has two Tsimshian co-authors who liaised with the Metlakatla First Nation Tsimshian community in British Columbia: Joycelynn Mitchell, and Barbara Petzelt. Petzelt also has an archaeology degree, and both have worked with researchers including Malhi on other DNA studies.

“Ripan Malhi is one of the leaders in changing the relationship between genetic researchers and indigenous people,” says Raff. “He is setting a standard of good ethical practices for the rest of us.”