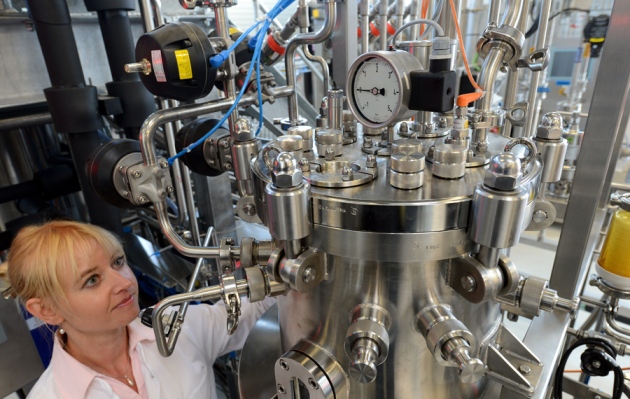 Research carried out by Germany’s Fraunhofer Society might be hampered by European funding rules.

A deal struck last week during negotiations on the research programme for the next seven years in the European Union (EU) promises a significant change to the way in which institutions are reimbursed for the overhead costs of their research. The agreement for Horizon 2020 sweeps away the onerous red tape involved in the present diverse arrangements and replaces it with an across-the-board 25% reimbursement rate for all.

Although the deal could be a boon for the many European universities with low overheads, which include heating, lighting, rent and facilities maintenance, it has disappointed some operators of large research facilities, mainly those in Western Europe. They warn that the simplified funding rules could harm top-ranking centres with high overheads because they will need reimbursement beyond 25% of the total direct costs.

Details of Horizon 2020, due to start next January, have been under negotiation since February in a series of talks between EUmember states, the European Parliament and the European Commission. The three were united on the programme’s goal to spur economic growth and on its broad themes, which include health and energy research. But the parliament and member states have been squabbling over what accounting rules might best serve Europe’s paperwork-plagued research community. The United States, too, has stumbled over funding of indirect costs (see ‘Transatlantic concerns’), but some had feared that the European deadlock over the issue would delay the start of Horizon 2020.

The thorny issue of overhead payments is not restricted to Europe. In the United States, the average reimbursement rate is around 50% of direct project costs, but top institutes such as Harvard University in Cambridge, Massachusetts, receive up to 70% of extra money from federal grants. Critics say that the current practice unfairly favours a few research powerhouses over many other, smaller universities. However, an attempt last year by President Barack Obama’s administration to introduce a single flat rate met with fierce opposition from large institutes such as Harvard and the Massachusetts Institute of Technology in Cambridge. The plan was abandoned.

Keen to simplify the affair, the European Commission and most member states threw their support behind a system that would pay grant-winners the full direct costs of a project, such as salaries, travel and laboratory supplies, plus a 25% flat rate to cover overheads. Such a move would also please the EU’s auditors — in a report released on 7 June, they slammed the complex funding model used in the organization’s 2007–13 research programme.

But some Members of the European Parliament (MEPs) — backed by the European University Association in Brussels, which represents many of Europe’s universities and research institutes — held that such an approach would make participation in Horizon 2020 unattractive for institutions with high overheads. Universities that run expensive facilities, for example ocean-going research vessels and synchrotron machines, would be left out of pocket, as would organizations such as the Fraunhofer, which have high overheads because the contract research they carry out often involves the use of expensive industry-owned research facilities. 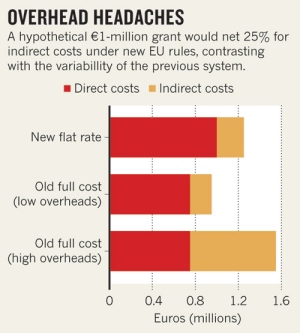 Critics of the flat rate were pushing for the ‘full cost’ reimbursement model used in the last EU research programme. This would have allowed organizations to get 75% of their direct costs plus 100% of their indirect costs — which can sometimes be as high as the direct costs (see ‘Overhead headaches’). In the end, a majority of member states and the commission gained the upper hand in their attempt to simplify the accounting. At the meeting last week, MEPs reluctantly agreed that Horizon 2020 would use only the flat-rate model. The deal must still be formally approved by parliament and EU member states, but it is expected to pave the way for Horizon 2020 to start on schedule.

“The parliament managed to safeguard many improvements and substantial simplification for participants,” said Christian Ehler, an MEP with the centre-right European People’s Party and parliament’s lead negotiator for Horizon 2020, in a statement to Nature. “But I dread the fact that the parliament had to consent to the council’s funding model” because it will dramatically disadvantage some institutions.

Nonetheless, some of Europe’s elite research universities are pleased with the promised reduction in red tape. “Having one rule for all is a major improvement,” says Kurt Deketelaere, secretary-general of the League of European Research Universities, a partnership of 21 top universities. “Imagine the insane complexity in collaborating with research organizations and companies which all follow different rules. That system had to go.” By and large, says Deketelaere, universities will be better off financially than they were under previous EU research programmes.

But the commission has promised to address the concerns of those unhappy with the new rules. A recent commission working paper seen by Nature proposes that more of the costs incurred in operating research facilities could be reimbursed if the money were interpreted as being fully related to a Horizon 2020 project. “We will take the commission at its word,” says Neugebauer.

Scientists in the 13 states that have joined the EU since 2004 could benefit from the changes thrashed out last week. Universities and institutes there have less experience in dealing with EU bureaucracy — a prerequisite for claiming and verifying overhead costs. Moreover, their overheads tend to be smaller than those of facilities-rich Western European research centres. As a further sweetener, scientists in these countries who receive a Horizon 2020 grant will get an annual salary bonus of €8,000 (US$10,400).

The flat-rate system could also help scientists in such countries to win a bigger slice of EU funding, says Krzysztof Frackowiak, director of the Polish Science Contact Agency in Brussels, which helps Polish institutions to negotiate EU red tape. The newer member states “haven’t been able to get back from Brussels nearly as much as they paid into European research programmes”, he says.