Excellent research should receive €24.6 billion (US$33 billion) in the European Union’s next research funding programme, the European Commission has proposed today. The Horizon 2020 funding scheme will run from 2014 to 2020.

As part of the 'excellent research' funding strand, the European Research Council (ERC) in Brussels is in line for a 77% funding boost, receiving a suggested €13.2 billion. 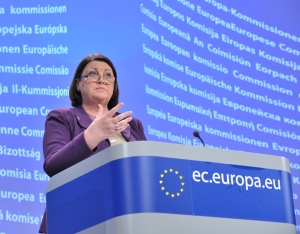 Helga Nowotny, president of the ERC, told Nature that she is “overall pleased” with the proposed budget, which she says will allow the ERC to “at least continue support for the very best researchers working in Europe”, and also fund young researchers.

The commission's proposal gives Horizon 2020 an overall budget of €80 billion, up from €50.5 billion for its predecessor — the Seventh Framework Programme for research, which runs from 2007 to 2013.

Presenting the Horizon 2020 proposals, research commissioner Máire Geoghegan-Quinn said, "We need a new vision for European research and innovation in a dramatically changed economic environment.” The direct financial stimulus suggested in the plans will help Europe to compete internationally, securing its economy and science base, she added.

Another winner under the plans is the European Institute of Technology (EIT) in Budapest, an initiative established in 2008 to boost innovation and industrial research spending in the European Union (EU), which would get €2.8 billion for 2014–20. The EIT is expected to help to create up to 600 start-up companies over the funding period, and provide training for 10,000 PhD students.

The commission also proposes to expand the EIT’s activities and set up six new Knowledge and Innovation Communities (KICs) — hubs of innovation, research and education that are designed to bring business and academia together. The new KICs would focus on areas such as improving the quality of life and well-being for ageing citizens, providing a sustainable food supply and developing green manufacturing processes. They would add to the three existing KICs for climate change, sustainable energy and information and communication technologies.

In another funding strand, the Commission proposes to award €31.7 billion to research addressing six key challenges that face society. This includes more than €8 billion for health, €6.8 billion for green transport and €5.7 billion for clean energy.

As expected, the Commission proposes to create a separate fund for the Global Monitoring for Environment and Security Earth-observation project, outside of the general EU budget. The fund should have a budget of €5.8 billion, provided by EU member states in proportion to their gross national incomes. The move is sparked by concerns that the project is too costly to be funded from the general EU budget (see Outcry over EU budget plan).

Paul Boyle, president of Science Europe, a science-advocacy group based in Brussels, told Nature that the proposed budget hike “demonstrates that the European Commission recognizes the strong links between science, innovation and growth”.

Boyle, who is also chief executive of the UK Economic and Social Research Council in Swindon, adds that the focus on societal challenges and excellent research is “particularly welcome”.

“Clearly there will now be extensive debate on the breakdown of the specific budgets, including the balance of funding between the societal challenges, and on the research content within the challenges, to ensure that the questions addressed are truly those of the utmost importance,” he says.

The commission’s proposals will now be discussed by the European Parliament and by member states at the European Council, with the aim of reaching an agreement by the end of 2013.