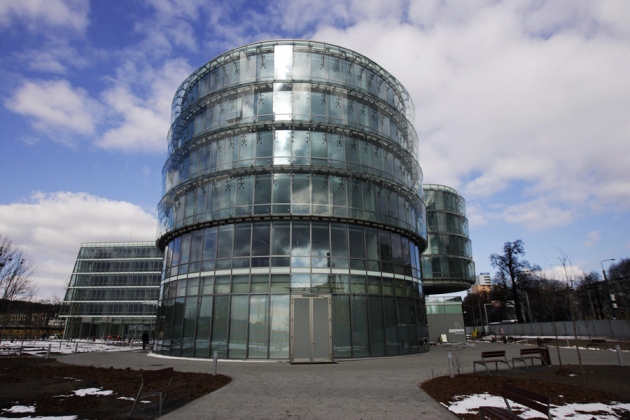 The Pomeranian Science and Technology Park in Gdynia, Poland is one of many centres that could benefit under the European Union's 'teaming' proposals.

Europe’s latest research-funding programme includes, for the first time, money for ‘low-performing’ member states to set up research centres in their regions, in partnership with well-established institutions from other countries. But some observers were disappointed earlier this month when the European Union (EU) announced that the host countries will manage the centres — a rule that critics say could be challenging for fledgling institutions and perhaps perpetuate problems, such as nepotism, that have contributed to their poor performance in the first place.

“There are lots of really good scientists [in southern and eastern Europe] but it's the management of institutions that is inefficient, old style, corrupt,” says Botond Roska, a neuroscientist at the Friedrich Miescher Institute for Biomedical Research in Basel, Switzerland.

Herbert Reul, former chair of the European Parliament’s committee on industry, research and energy, an early supporter of the teaming idea, says that well-governed centres operated at international standards could help to reverse the scientific ‘brain drain’ from low-performing European regions. The competition for Horizon 2020 money might also spur governments of low-performing regions, which receive substantial EU infrastructure funding, to improve conditions for science research — even if they do not win the full prize.

The scheme has been revised from an earlier formulation in which the partners would have decided which of them would serve as the coordinating institution — which is how most research partnerships work in Horizon 2020. Many advocates from leading organizations say that they assumed this meant that the high-performing institution would be the managing partner (see ‘European ministers back research-buddy plan’) when they signed a January 2013 white paper in favour of the proposal.

But the call for grant proposals for 2014, published on 11 December, states that the host region should be the coordinator.

Critics argue that handing control to the host regions undermines the strengths of the teaming idea. “This type of large international project requires sufficient experience as well as capacity to coordinate and manage,” says Wilfried Reincke, the liaison officer for EU research grants at Radboud University Nijmegen in the Netherlands.

“We are convinced that it would have been a much better concept to leave it open to the teaming consortium to decide about the role of the coordinator,” says Babett Gläser, a scientific officer for Germany’s Max Planck Society in Brussels, which signed the 2013 white paper.

Bogdan Onac, a palaeoclimatologist at the University of South Florida in Tampa, who began his scientific career in Romania and continues to collaborate with researchers there, says he worries that local governance in Romania is uneven and may not always be up to the challenge of managing the teaming funds. “If it’s not controlled by one of these big powers outside Romania, I think it could be a failure in some fields with some labs,” he says.

Such concerns prompted Roska and a few other scientists to write to EU research commissioner Máire Geoghegan-Quinn calling for teaming institutes to have an initial period of outside management as well as international scientific advisory boards with hiring and firing power.

European Commission spokesman Michael Jennings says that the committee that wrote the call for teaming proposals includes representatives from the EU member states. The committee agreed to assign coordination responsibilities to local partners so that they would have “strong ownership” of the project, he says. That is important because the local partner must develop the project's long-term strategy and garner further financial support for it, Jennings adds.

Reincke warns that leading EU research institutions may hesitate to sign on, “as they now have far less control over the spending of resources, while at the same time connecting their name and reputation to the teaming project.” The decision may mean that the established institutions will vet potential partners more carefully before writing a proposal, he says. Institutions have until 17 September 2014 to submit proposals for the first round.

Other observers, although cautious, say that researchers and administrators should give teaming a chance. Roger Woods, a professor of German studies at the University of Nottingham, UK, who once led the university’s campus in Ningbo, China, says that although it may be challenging for host institutions to coordinate such projects, “it is still an opportunity that merits serious consideration by any internationally minded, research-led university”.