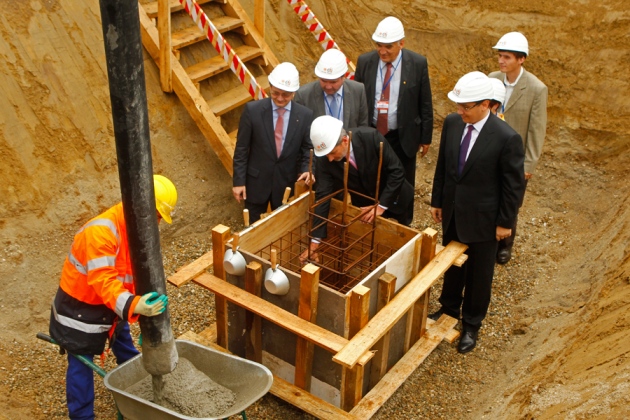 Romania in June began construction of a laser facility focusing on nuclear physics.

Last month, a large European nation placed an order for a pair of titanium–sapphire lasers. With an output of 10 petawatts, each would be about nine times more powerful than the strongest laser in existence today — capable of exploding the nuclei of heavy elements.

Nearly as special as the lasers is the place where they will be delivered: Măgurele, Romania, a town of 11,000 people that was once home to a Soviet-era research reactor. In June, workers broke ground at the construction site for a new research centre to house the twin lasers.

It would not be possible for the former Eastern bloc nation to afford the project’s €356-million (US$475-million) cost: expenditures on research and development in Romania are among the lowest in Europe. Instead, the European Union (EU) is expected to pick up most of the tab, as it plans to for two other facilities, in Hungary and the Czech Republic. The three projects, along with a fourth still on the drawing board, will make up the Extreme Light Infrastructure (ELI) — an experiment in using EU structural funds to advance research.

“With ELI, we enter a new era, pioneering the use of structural funds for an international research infrastructure,” says Wolfgang Sandner, who heads a consortium set up by the three countries and Italy to manage ELI.

Structural funds, which make up more than one-third of the EU budget, are aimed at reducing economic disparities across Europe. They typically pay for local projects such as road repair, construction of power lines or clean-up of industrial waste — not super-powerful lasers. And although any member state can apply for these infrastructure funds, most of the money goes to the poorest countries.

ELI, by contrast, is an international research institute that will encourage scientists to do laser experiments at higher energies, intensities and speeds. Both France and the United Kingdom wanted to host the project, marked as a priority in a 2006 road map for European research. But structural funds provided the Czech Republic, Romania and Hungary with a way to pay for it. Advocates for using the money in this way touted the potential of ELI to stimulate economic growth. Romania hopes to attract technology companies and establish Măgurele as a ‘laser valley’; the region is also planning to build a smaller laser facility to train its scientists to participate in ELI. 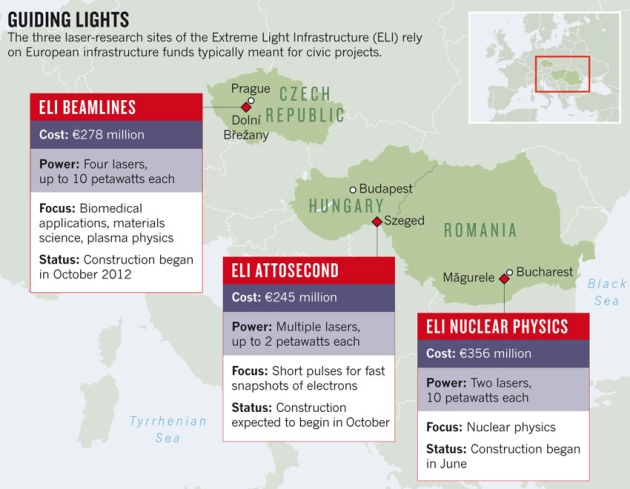 But the structural funds come with strings attached. For starters, the money must be spent by 2015, and meeting that deadline is proving difficult. After Romania was selected for ELI in 2009, it took two years to decide how to shift structural funds away from other projects, delaying the start of construction. And Hungary submitted a formal funding proposal only in May. That request has yet to be approved.

Using structural funds to buy high-end lasers has also been tough, says Vlastimil Růžička, managing director of the Czech facility, to be built near Prague. That is partly because these funds usually go towards civic projects and products with clear prices and capabilities. Working out the uncertainties involved in developing cutting-edge lasers has required protracted negotiations with laboratories. “Included in the contracts are penalties for not delivering,” says Růžička, who has spent nine months working out a deal to buy a laser from the Lawrence Livermore National Laboratory in Livermore, California.

The three countries have asked the European Commission to approve a phased approach that would bring some lasers online in 2015 and others in 2017. Adrian Curaj, general director of Romania’s Ministry of Education, Research and Youth in Bucharest, says he is confident that this approach will pan out. “Everyone wants a success story here,” he says.

Each branch of ELI will specialize in a different kind of laser science (see ‘Guiding lights’). Romania’s intense lasers will explore nuclear physics, and the Czech lasers will accelerate particles to make X-ray and ultraviolet light sources, useful in exploring the structure of molecules and solid materials. One laser will fire exceptionally rapid pulses to excite electrons in a plasma. Those electrons then shed that energy, emitting a laser-like, or coherent, beam of X-rays.

Most sources of coherent X-rays, such as the European X-ray free-electron laser (XFEL), under construction near Hamburg, Germany, use microwaves to accelerate electrons over a long distance — 1.7 kilometres, in the case of the XFEL. By contrast, ELI’s compact X-ray laser technology will fit on a tabletop in a small laboratory. Its designers hope that a successful demonstration will encourage wider use of laser-based X-ray sources. The pulses that ELI makes will be complementary to those at XFEL — less energetic but spread over a broader spectrum — and will be useful for probing different kinds of atoms in a material simultaneously, for instance.

“Each time laser pulses have gotten shorter, a new physical regime has been accessed and we have learned new things.”

Hungary’s lasers, to be housed in a former military barracks in the town of Szeged, will also produce X-rays. But here the goal will not be to make pulses coherent, but to make them as short as possible — each lasting less than one-quadrillionth of a second. At this time scale, the pulses can excite a target atom’s electrons, which can then be tracked by the X-rays. “Each time laser pulses have gotten shorter, a new physical regime has been accessed and we have learned new things,” says Todd Ditmire, director of the Texas Petawatt Laser project at the University of Texas at Austin and chief executive of National Energetics, a laser company based in Austin that has plans to bid on building one of Hungary’s lasers.

As the ELI trio takes the stage, a fourth ELI project waits in the wings: a facility for relativistic physics, underpinned by an even mightier laser that would reach 200 petawatts of power. This titan’s beam would be strong enough to distort empty space — enabling researchers to test the idea that a vacuum can behave like a crystal and bend light. The powerful beam could probe the nature of virtual particles as they pop in and out of the void and search for radiation that is thought to be given off by an object accelerating through a vacuum.

How to make that laser is still an open question — as is where to build it and how to pay for it. The fourth site might go to one of the countries that is already participating. Another option is Russia, which has proposed building a ‘super-laser’ from 12 smaller ones. “It was, and remains, ELI’s strategy to first gain some experience about the feasibility of different technologies at the three existing pillars before narrowing down the options,” says Sandner.